The times they are a changin’ - back in the 1960’s musician Bob Dylan, who just turned 80, wrote a song by this title. It was intended to serve as a rallying cry for people to come together to bring about positive change. Similarly, Governor Charlie Baker recently issued a doctrine to bring people together again by rescinding pandemic restrictions and launching the Let's Go Out marketing campaign to encourage our support of local restaurants and in-person dining.

Local businesses are the life blood of our Massachusetts economy and we are rooting for their success. I believe that we all have a responsibility to do what we can to help them recover from COVID-19 related losses. In this newsletter you will also read about a new program in which we acknowledge businesses throughout the Commonwealth for their commitment to their local communities. Plus, you will hear about our Chapter 206 grants and how the Division of Banks has awarded over $2.5 million in grants to fund first-time homeownership education programs and foreclosure prevention counseling centers.

And finally, I hope you will join us today at 11am for our next virtual event Protecting Your Business and Your Customers: Creating a Fair Playing Field for All. This webinar is being brought to you in partnership with the Greater Beverly Chamber of Commerce (GBCC), the Cape Ann Chamber of Commerce (CACC), and the North of Boston Convention & Visitors Bureau (NBCVB). Read on to learn more.

Coalition Hosts Webinar on Protecting Your Business and Your Customers

The Massachusetts Office of Consumer Affairs and Business Regulation (OCABR) in collaboration with the Greater Beverly Chamber of Commerce (GBCC), the Cape Ann Chamber of Commerce (CACC), and the North of Boston Convention & Visitors Bureau (NBCVB) will host a virtual event - Protecting Your Business and Your Customers: Creating a Fair Playing Field for All - on Tuesday, 6/8/21 at 11am.

The panel will be moderated by Leslie Gould and feature guest speakers: Edward A. Palleschi, Undersecretary of Consumer Affairs; Layla R. D'Emilia, Commissioner of the Division of Professional Licensure; and James P. Cassidy, Director of the Division of Standards. This webinar is free and open to the public; however, advance registration is required. Register here.

Over the past fifteen months, the pandemic brought about new challenges, concerns, and guidance to help businesses continue to operate. Throughout this period safety was at the forefront of much of what occurred. While the state of emergency has concluded, the need to maintain safety protocols has not. This webinar will address ways to protect your business and yourself in the best of times, and as has been the case more recently, in the worst of times.

This webinar is part of series of virtual events designed to help Massachusetts businesses and consumers be more informed and empowered. During this webinar on protecting businesses and consumers, attendees will be able to ask questions and receive real-time responses from our panel of experts. Participants will learn about state mandates and how to report violations as well as hear about consumer protection programs and how to take advantage of them.

The Division of Banks (DOB) awarded over $2.5 million in grants to fund first-time homeownership education programs and foreclosure prevention counseling centers throughout the Commonwealth for the 2021 calendar year. The funds awarded through the Chapter 206 grant program went to a total of 21 organizations including 10 foreclosure prevention regional centers and 11 consumer counseling organizations.

Chapter 206 grants assist homeowners who are often experiencing some type of financial hardship caused by either a loss of or reduction in income or a medical issue as well as prospective homebuyers who are determining if homeownership is right for them. The DOB administers funding of these grants with fees associated with the licensing of mortgage loan originators. Funded organizations served over 9,000 Massachusetts consumers and homeowners in 2020.

“Over the past year, due to the pandemic emergency, it has been more important than ever to help keep the people of the Commonwealth in their homes. The DOB remains committed to providing resources and consumer education at this critical time,” said Edward A. Palleschi, Undersecretary Consumer Affairs and Business Regulation. “The organizations receiving Chapter 206 grants aim to make homeownership feasible for many by offering guidance to prospective home buyers and a lifeline to those struggling with home retention, the value of that work is priceless.”

“We are proud to be able to support Massachusetts consumers for the thirteenth consecutive year by funding programs that offer foreclosure counseling and homeownership education. These grants fund import resources in our local communities,” said Commissioner of Banks Mary L. Gallagher. “The funded organizations have demonstrated strong work plans to continue to serve clients both in-person and remotely adapting to our new normal.”

Since the inception of the grant program in 2008, the DOB has awarded over $18 million to organizations that have been able to assist almost 60,000 consumers thanks to these grants.

The Devil is in the Details

Buying a vehicle involves a lot of attention to details - from deciding on the obvious make, model, color, and options to reading the fine print on the purchase contract. So it is important to pay close attention to all of these details, especially the itemized costs listed above the final purchase price. There you may find additional fees incorporated into the cost of your new ride.  Fees vary from state to state, but often noted are “documentation fees,” also known as “doc fees.”

What are doc fees?

Doc fees generally refer to the fees a dealer charges a consumer to offset the cost of preparation of paperwork necessary to complete the sale. They are neither required, nor prohibited by Massachusetts state law. These fees can often be negotiated.  If the dealership refuses to waive, or reduce, the fees ask them to reduce the purchase price of the vehicle itself.

How can you tell if you’re being scammed?

When a dealer advertises the price of a car, the doc fees must be included in the advertised price. It is not illegal to charge this fee, as long as the dealer charges it equally to all purchasers. If the dealer tries to charge more than the advertised price, it is deemed an unfair and deceptive practice under the Attorney General’s motor vehicle regulations. If this happens to you, report it to the Attorney General’s Office at (617) 727-8400 or by filing a complaint at www.mass.gov/how-to/file-a-consumer-complaint.

More information about car buying, including protections under the Massachusetts Lemon Laws, can be found here.

As everyone gets back to work after what has been a difficult year for all, the Office of Consumer Affairs and Business Regulation (OCABR) is focusing on the positive by recognizing a standard of excellence among its licensees. In the newly launched program, licensees in good standing who meet certain criteria receive a visit from the Undersecretary and a certificate of appreciation to acknowledge their contribution to the local community, and to the consumers of the Commonwealth.

“When your business is regulated by the state you expect compliance checks and other types of visits, but it isn’t often that someone in a government position stops by to say ‘nice job, glad for what you bring to the community’ and we wanted to change that,” said Edward A. Palleschi, Undersecretary Consumer Affairs and Business Regulation. “A lot of our licensees are stellar examples of good corporate citizens and we wanted to find a way to showcase that while thanking them for their efforts.”

OCABR empowers Massachusetts consumers through advocacy, community outreach, education programs, and partnerships while ensuring a fair and competitive marketplace for the business its five agencies regulate. In advancing its mission, OCABR continually strives to find a balance between protecting consumer rights and supporting business vitality in the Commonwealth. This program highlights the intersection of business exuberance and consumer safeguards by shining a light on businesses that bring value to the consumers they serve.

During the program’s inaugural month, two businesses were recognized:

On the morning of Monday, 5/17 Undersecretary Palleschi visited the Peterson School’s Woburn campus where he commended their leadership for commitment the industry, students and community his schools serve. Owner Jim Reardon was awarded a certificate of appreciation by the Undersecretary.

On the evening of Monday, 5/24 a small ceremony was held at 8 Main Street, Hingham - Zona Salon's newest location. Undersecretary Palleschi thanked 3rd generation salon owner Frank Zona for his dedication to excellence and presented Zona Salons with a certificate of appreciation to acknowledge the business’ contribution to the local community, and to the consumers of the Commonwealth.

Register for our Next Event 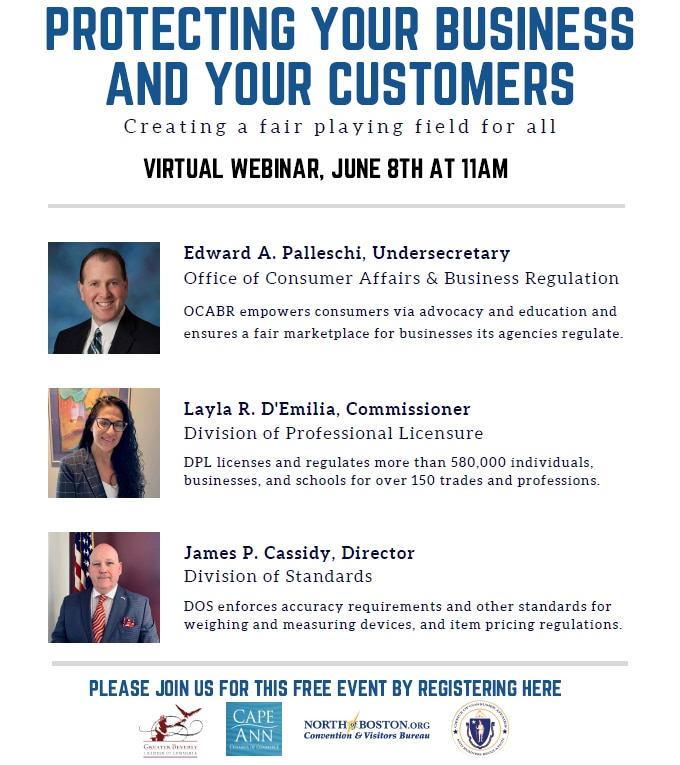 Thanks, your message has been sent to Office of Consumer Affairs and Business Regulation!