I. Fraud, Waste and Abuse Hotlines

The Office is committed to ensuring that individuals can confidentially report suspected wrongdoing in the use of public funds or assets. Individuals therefore can report suspected misconduct to the Office in person or by telephone, U.S. mail, email or facsimile (collectively, “hotlines”). All complaints to the Office’s hotlines are treated confidentially, and individuals can choose to submit a complaint anonymously.

In the Association of Certified Fraud Examiners’ 2018 Report to the Nations on Occupational Fraud and Abuse, data collected for more than a decade showed frauds are more likely to be detected by a tip when a hotline is in place.

The Office evaluates each complaint to determine whether it falls within the Office’s jurisdiction and whether it warrants action. Some complaints lead to extensive investigations, some are referred to other agencies and others are closed if a preliminary inquiry fails to substantiate the allegations.

While not all complaints result in an investigation or review, many uncover wrongdoing, such as corruption, theft, time fraud, favoritism in selecting contractors, mismanagement or wasteful spending. Complaints made to the Office’s hotlines also result in improvements in the how government agencies operate. Complaints often lead to cost recoveries and civil settlements as well.

The Audit, Oversight and Investigations Division operates the Office’s main fraud hotline. In this role, the Division carefully reviews and evaluates all complaints it receives. The Internal Special Audit Unit (“ISAU”) maintains a hotline for members of the public to anonymously report suspected fraud, waste or abuse in the expenditure of MassDOT funds. The hotline is available on the Office’s, MassDOT’s and the MBTA’s websites. The ISAU also maintains an employee hotline on MassDOT’s intranet and monitors the RMV’s disability parking placard hotline. 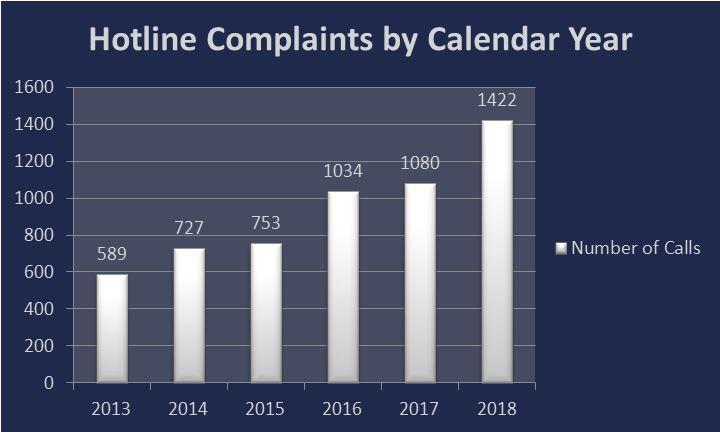 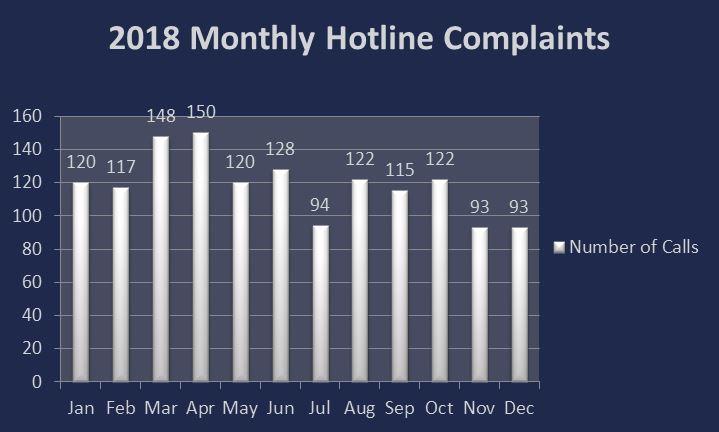 Education is critical to improving government and safeguarding public assets. Consequently, the Office has established a hotline to respond to questions and complaints concerning public procurements. Through the hotline, the Office helps municipalities comply with state bidding laws and conduct fair, open and competitive procurements. Calls to the hotline also lead public entities to rebid contracts, strengthen procurement procedures, institute internal controls and implement other process improvements. In 2018, the Office responded to approximately 1,350 inquiries and questions about the Uniform Procurement Act, M.G.L. c. 30B, as well as other public bidding laws and practices.

No two hotlines calls are the same. Some questions are straightforward while others present complex, fact-specific issues that require in-depth analysis and research. The top inquiries on the Chapter 30B hotline for 2018 were questions regarding the applicability of Chapter 30B to procurements, construction bid laws, requirements for requests for proposals, use of statewide contracts, real property acquisition and disposition, cooperative purchasing requirements and sole-source purchases. The hotline received calls from municipalities across the Commonwealth, regional school districts, state agencies, housing authorities, planning commissions, light plants, community colleges, and many other public jurisdictions, vendors and the general public.

Open file for Chapter 30B Hotline