OIG Bulletin, October 2021: The History of the Massachusetts Office of the Inspector General

​​​​​​​The Massachusetts Office of the Inspector General (OIG), established by Chapter 388 of the Acts of 1980, was the first state inspector general’s office in the nation.

The OIG has a statutory mandate to act to prevent and detect fraud, waste and abuse in the expenditure of public funds. See M.G.L. c. 12A, § 7. It was created as an independent state agency that would not be subject to oversight or control by any other state entity. The Office serves the residents of Massachusetts by promoting transparency, efficiency and accountability in government. (For more information about the events that led to the creation of the OIG, please see "The Ward Commission.")

History of the OIG

Joseph R. Barresi was sworn in as the state’s first Inspector General in 1981. The Office began with a staff of just 18, with legal and management student interns providing additional assistance. Besides the Inspector General and his executive team, the OIG was divided into three divisions: Investigation, Auditing and Management. Investigation and Auditing often collaborated on criminal investigations into fraud and abuse, while Management identified areas of potential waste of public funds and resources.

Shortly after the Office opened, the Inspector General also created a 24-hour confidential reporting hotline “to afford everyone an easy, confidential manner to share their knowledge of fraud and waste in government.” In its first 4 days, the hotline received 21 complaints. Today, the OIG Fraud Hotline continues to be a vital part of the Office’s work to investigate fraud and other wrongdoing, logging an average of 53 calls per week in 2020.

In 1985, the Office published its first training manual for the public as part of its prevention efforts. The Designing and Constructing Public Facilities manual outlined legal requirements and best practices for awarding public building contracts. The OIG published the 10th edition of the manual in September 2021.

Robert A. Cerasoli became the second Massachusetts Inspector General in 1991 after IG Barresi served the maximum two five-year terms. See M.G.L. c. 12A, § 2. Cerasoli added new units to the Office to review and audit contracts and to monitor state construction projects. In addition, he created a Legislative and Public Policy Unit to review and make recommendations about legislation, real estate transactions and state and local programs. With these incremental changes throughout the 1980s and early 1990s, the Office’s staff had more than doubled to 42 employees by 1996.

To build on its public procurement training efforts, the OIG successfully lobbied the Legislature to fund a public procurement certification program. The OIG offered its first Massachusetts Certified Public Purchasing Official (MCPPO) class in 1997, run by the newly created MCPPO Program Unit. Starting with one general procurement class in 1997, the OIG now offers nearly 100 MCPPO classes annually. (For more information about the MCPPO program, please see "The MCPPO Program: Past, Present and Future.") Also in 1997, the OIG began publishing the Procurement Bulletin, which provided local jurisdictions with information and recommendations to encourage effective and ethical purchasing.

During Cerasoli’s tenure, the OIG became involved in oversight of two of the largest projects ever undertaken by the Commonwealth: the Central Artery/Tunnel Project (also known as the Big Dig) and the Boston Harbor Cleanup Project. The OIG created the Megaproject Oversight Division in 1998 to reflect the scale of this work, which resulted in numerous OIG reports throughout the 1990s and early 2000s. (For more information about the OIG’s work on the Big Dig, please see "40 Years of OIG Investigations.")

After IG Cerasoli stepped down in June 2001, Gregory W. Sullivan became Acting Inspector General. In August 2002, Sullivan was appointed to a full five-year term as the third Massachusetts Inspector General. While continuing the Office’s oversight of the Big Dig, Sullivan focused on fraud, waste and abuse involving affordable housing projects, municipal light departments and health care programs, among other areas of public funding. Since 2004, the Office has conducted focused reviews of the Massachusetts Medicaid and Health Safety Net programs. Beginning in 2006, the OIG issued a series of reports documenting widespread and pervasive abuses under the Chapter 40B cost monitoring process for affordable housing.

The early 2000s, however, were also a time of uncertainty for the OIG. In each of his four annual budgets starting in 2003, Governor Mitt Romney proposed defunding the OIG and eliminating it as an independent state agency. The Legislature rejected Romney’s proposal each year and continued to fund the OIG, confirming widespread support of the Office’s mission and independence.

In 2009, the OIG began expanding through the addition of what would eventually become three “embedded units,” i.e., divisions of the OIG embedded within certain state agencies that the Legislature deemed in need of heightened oversight. The Legislature created the first embedded unit, the Internal Special Audit Unit (ISAU), to monitor the quality, efficiency and integrity of the Massachusetts Department of Transportation’s (MassDOT) operating and capital programs. See M.G.L. c. 6C, § 9.

In 2012, Glenn A. Cunha was appointed the fourth Massachusetts Inspector General after IG Sullivan’s two five-year terms. Cunha restructured the Office into the five non-legislatively created divisions that make up the OIG today: Administration and Finance; Audit, Oversight and Investigations; Legal; Policy and Government; and Regulatory and Compliance.

As the Legislature had not funded the ISAU upon its creation in 2009, Cunha worked with MassDOT to secure funding for it in 2012. After funding and staffing the ISAU, the OIG created two new hotlines for 24-hour confidential reporting of MassDOT-specific fraud, waste and abuse: one for MassDOT employees and one for the public. 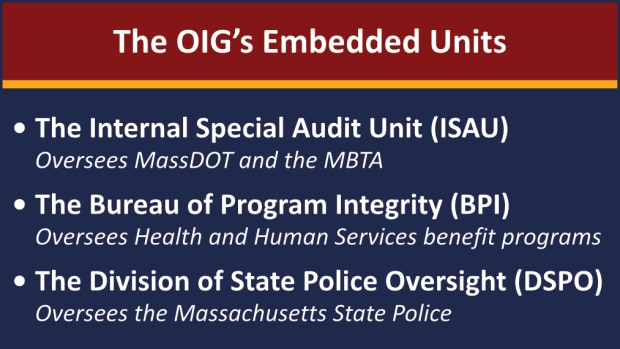 In 2013, the Legislature created and funded a second OIG embedded unit: the Bureau of Program Integrity, mandated to oversee the quality, efficiency and integrity of benefit programs in the Executive Office of Health and Human Services. See M.G.L. c. 6A, § 16V. In 2018, the Legislature created and funded the OIG’s newest embedded unit: the Division of State Police Oversight, which monitors the quality and integrity of Massachusetts State Police operations, organizational structure and management functions. See M.G.L. c. 22C, §§ 72-73.

In January 2019, Cunha established the Civil Recovery Unit (CRU) within the Office’s Legal Division. In consultation with the Massachusetts Attorney General’s Office, the CRU recoups public funds lost to fraud, waste and abuse pursuant to Section 11 of Chapter 12A of the Massachusetts General Laws. 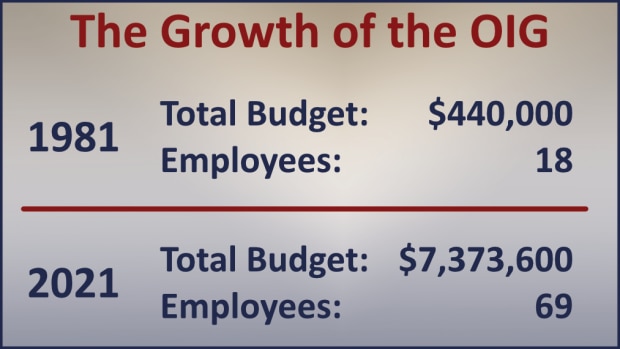 That same year, the OIG decided to expand its quarterly Procurement Bulletin beyond procurement. The OIG Bulletin, as it is now known, keeps the public updated on the work of the entire Office while still providing procurement tips, best practices and responses to frequently asked questions about Chapter 30B.

Today, the OIG has nearly 70 employees. Although the Office has grown significantly since its creation 40 years ago, its mission is the same: to prevent and detect fraud, waste and abuse in the use of public funds and property. The OIG remains committed to enhancing public confidence in government and promoting the best interests of the people of the Commonwealth.