History of the Ward Commission

As we commemorate the 40th anniversary of the establishment of the Massachusetts Office of the Inspector General, we must recognize the importance of the Legislature’s decision to create an independent commission to address widespread corruption in the state’s bidding and contracting procedures. That commission was officially called the “Special Commission Concerning State and County Buildings,” although it is better known today as the “Ward Commission,” in honor of its chairman, John William Ward. Ward had been a professor at Princeton University and became the president of Amherst College in 1971. He left his position at Amherst to chair the commission.

The need for the Ward Commission grew out of an ineffective and corrupt system of awarding state contracts. During the 1960s and 1970s, government contracts were often awarded not to the responsible bidders offering the best price, but to the bidders willing to make the most generous campaign contributions, bribes or payoffs to government officials. In 1969, the state’s Bureau of Building and Construction awarded a contract to construct a new Boston campus for the University of Massachusetts to the McKee-Berger-Mansueto (MBM) construction firm before state officials had even received MBM’s proposal. When this arrangement came to light, the Legislature formed a joint committee to investigate the matter.

While this committee should have been the turning point, it only proved to be another example of corruption in the system. The legislators in charge of investigating the MBM deal, Senators Joseph DiCarlo and Ronald MacKenzie, demanded tens of thousands of dollars from MBM executives in exchange for a favorable committee finding, which MBM paid. Senators DiCarlo and MacKenzie were ultimately charged and found guilty of extortion in federal court.

Out of these scandals came the creation of the independent Ward Commission, which spent over two years investigating corruption in state building and construction contracts and released its final 12-volume report in 1980. Its findings were staggering. The commission found that billions of dollars had been wasted on building projects and concluded that:

The Ward Commission made many recommendations about how to eliminate corruption and overhaul the contract award system. In addition to structural changes to the awarding of state contracts, the commission also recommended the creation of a first-in-the-nation state inspector general’s office. No state agency in Massachusetts at the time was responsible for preventing and detecting fraud, waste and abuse in the expenditure of tax dollars, a task the commission recognized as complex, time-consuming and specialized.

The commission identified “a vast middle ground” between the state auditor and prosecutors, “between the ability to review all state transactions to a limited degree without the power to investigate, and the power to investigate allegations of fraud on a case-by-case basis.” 8 Final Report to the General Court of the Special Commission Concerning State and County Buildings 88 (Dec. 31, 1980) (Ward Commission Report). The commission accordingly emphasized the need for a state inspector general’s office that could work to prevent fraud, waste and abuse and had the ability to conduct “wide-ranging, systematic investigations.” Id. at 87-88. The commission designed the OIG to be a “neutral, impartial and independent office” that would serve as a “mechanism for self-criticism and self-correction” in state government. 1 Ward Commission Report at 37. 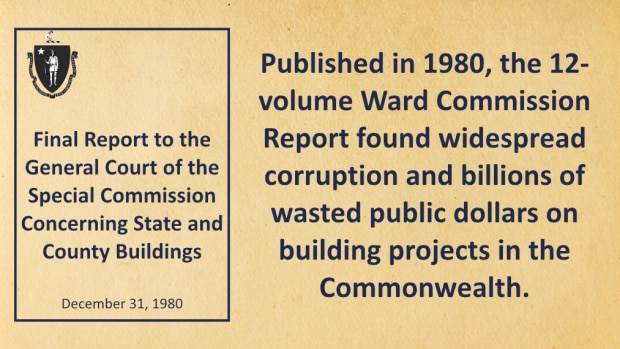 Based on the commission’s recommendation, and after prolonged discussions and negotiations, the Legislature passed a bill establishing the Office of the Inspector General in July of 1980. Governor Edward King signed that legislation (Chapter 388 of the Acts of 1980) into law, and the first Massachusetts Inspector General, Joseph Barresi, was appointed in 1981. The statute, codified in Chapter 12A of the Massachusetts General Laws, charged the OIG with acting “to prevent and detect fraud, waste and abuse in the expenditure of public funds,” a mandate the Office continues to follow more than 40 years later. M.G.L. c. 12A, § 7.

Today, John William Ward and the Ward Commission still inspire public service dedicated to good government. Each year, the Boston Latin School awards the John William Ward Public Service Fellowship to 15 students. The fellows work for a summer in the office of an elected or appointed public servant in state government, municipal government or the judicial system.

The OIG is happy to have welcomed a Ward Fellow each summer for the last nine years. 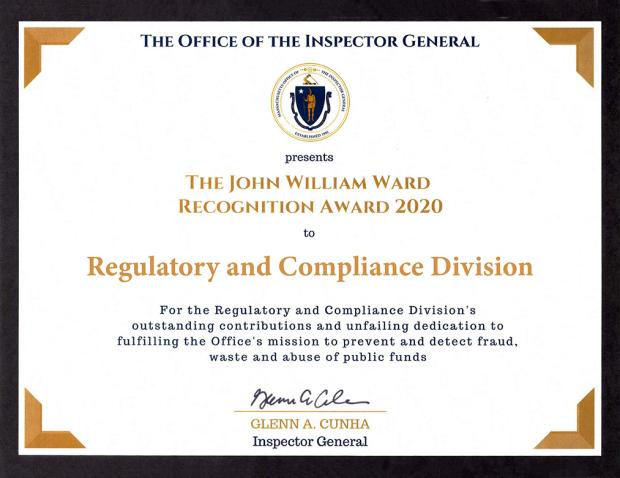 In 2020, the OIG created the John William Ward Performance Recognition Award to acknowledge outstanding staff contributions to the Office’s mission to prevent and detect fraud, waste and abuse of public funds. The OIG’s Regulatory and Compliance Division was the recipient of the first Ward Award in recognition of its quick and efficient conversion to an online training platform during the COVID-19 pandemic, allowing the Office to continue to provide important educational and professional development opportunities to public employees.