BOSTON — The Baker-Polito Administration today announced the awarding of $495,321 in grants provided through the Massachusetts Environmental Trust’s (MET) FY22 Aquatic Animal Conservation Grantmaking Program to 11 programs across the state that will restore aquatic habitats, rivers and watersheds, and protect endangered species, including at-risk sea turtles and the rarest large whale, the North Atlantic right whale. The funding was provided by the Massachusetts Environmental Trust, which collects funds through the sale of its environmental-themed specialty license plates.

“Massachusetts has always taken a proactive approach in safeguarding and enhancing our natural resources in order ensure future generations receive the opportunity to experience the wonders of our natural world,” said Energy and Environmental Affairs Secretary Beth Card. “For years the Commonwealth’s environmentally-themed license plates have provided significant financial resources that have advanced the state’s conservation efforts, and invested in protections for our fisheries and wildlife.  I encourage those who want to support these efforts to purchase one of these plates.”

The Massachusetts Environmental Trust is an independent grantmaking entity within the Executive Office of Energy and Environmental Affairs (EEA). The Trust was established in 1988 as part of the Boston Harbor cleanup to support pollution remediation and water quality improvement projects across the Commonwealth. MET operates without tax dollars or legislative appropriations and is governed by a board of trustees appointed by the Secretary of Energy and Environmental Affairs. MET is solely funded by the sales of its four environmentally themed license plates: the Right Whale & Roseate Terns Plate, the Leaping Brook Trout Plate, the Blackstone Valley Mill Plate, and the new Striped Bass Conservation Plate.

“MassDOT is pleased to offer these specialty license plates to raise awareness for important environmental causes, and through the Massachusetts Environmental Trust, help provide funding for programs and initiatives that support training, clean-up, conservation and restoration, and ongoing efforts to protect endangered species,” said Transportation Secretary and CEO Jamey Tesler. “We appreciate the work of the Massachusetts Environmental Trust in raising awareness about our valuable resources and expect that many people in the state will be interested in choosing one of these specialty plates for their vehicles.”

The Trust has invested more than $20 million in environmental grantmaking awards for more than three decades and to commemorate this milestone, a comprehensive report about what MET does and what its grantees have accomplished will soon be released to legislators, grantees and Massachusetts citizens. Drivers who have a whale tail, trout, bass, or Blackstone Valley Mill license plate are the nexus to the long-term success of the Trust because of their donations. The geographic locations of the organizations recommended for awards are distributed statewide with projects in the western, central, metropolitan Boston, north and south of Boston, and Cape Cod regions. The grants awarded by the Baker-Polito Administration include:

“Our waterways are one of our Commonwealth’s greatest assets,” said State Senator Becca Rausch (D-Needham), Senate Chair of the Joint Committee on Environment, Natural Resources and Agriculture. “From the Housatonic Watershed to Cape Cod Bay, we must do everything possible to preserve the richness and diversity of Massachusetts’ aquatic ecosystems. The Aquatic Animal Conservation Grantmaking Program will equip key environmental leaders across the state with the support they need to advance our shared commendable environmental goals.”

“I’m excited that today’s announcement will devote state resources to strengthen the state’s aquatic animal conservation and endangered species programs. Having just participated in these programs last week (with turtles and eagles), I experienced the dedication, skills and talents of our state’s environmental staff, as well as the program’s accomplishments,” said State Representative Mindy Domb (D-Amherst), Acting House Chair of the Joint Committee on Environment, Natural Resources and Agriculture. “I also want to note that this funding supports the priorities of many colleagues, whether it is those House members who work hard to protect the North Atlantic right whale and those whose districts benefit from the work of recipient organizations. I’d also like to acknowledge the Fort River Watershed Association who will use their award to design and install interpretive signage on the Emily Dickinson Trail, along the Fort River, helping visitors to interact and engage with their natural surroundings.”

“Investing in our environment invests in our health and wellbeing,” said State Representative Norman Orrall (R-Lakeville). “I am thankful for the continued commitment of the Baker-Polito Administration to be good stewards of all of our natural resources.” 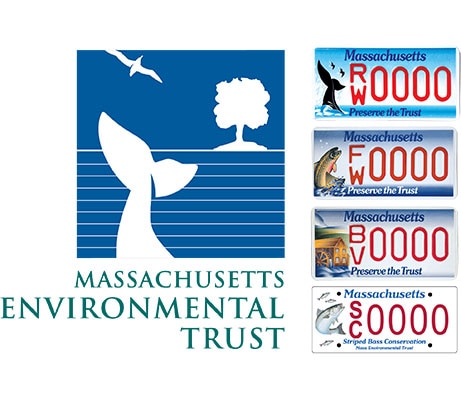 MET is a grant program whose mission is to support projects that enable innovative approaches to protect and restore natural resources.
More

Thanks, your message has been sent to Executive Office of Energy and Environmental Affairs!