It’s nesting season for bald eagles! MassWildlife has already documented over 70 active eagle nests and a dramatic uptick in new nests throughout Massachusetts this spring.

It’s nesting season for bald eagles, and the Massachusetts Division of Fisheries and Wildlife (MassWildlife) is pleased to announce it has already documented over 70 active eagle nests throughout Massachusetts this spring. MassWildlife has seen a dramatic uptick in newly documented eagle nests this year and has confirmed nine new nests in Fitchburg, Wenham, Concord, Rutland, Wareham, Medford, Northampton, Hudson, and Barnstable. The new Barnstable nest marks the first nest with eggs on Cape Cod in 115 years; the last was in Sandwich in 1905!

As the eagle population continues to grow, new challenges emerge as pairs try to establish new territories. For instance, this spring marked the first documented case of eagles nesting on Martha's Vineyard. An eagle pair took over an osprey nest and were incubating eggs when the ospreys returned from their wintering grounds. The osprey pair that most likely built the nest harassed the incubating eagle who would flip upside down with its talons in the air in defense. Eventually the eagle cracked the eggs doing this, and this historic nesting attempt failed. Two other eagle nests on the mainland have also failed as a result of an intruding eagle invading the territory and killing the chicks in the nest. Although difficult for observers to witness, these events are all signs of a thriving eagle population in Massachusetts. On the upside, more and more people across the Commonwealth are experiencing the thrill of seeing eagles in their own neighborhoods as these birds continue to expand their range to urban and suburban landscapes. Due to successful conservation measures, the status of the bald eagle recently improved from threatened to special concern on the Massachusetts Endangered Species Act list.

In related news, New Hampshire confirmed a new state record for its oldest bald eagle, a bird that hatched in Massachusetts. This eagle, identified by a gold leg band coded "W84", was photographed this spring in New Hampshire. Banding records indicate this 23-year-old male hatched at the Quabbin Reservoir in Ware in 1997 and it had been recorded nesting in New Hampshire between 2007 and 2014. The previous NH record holder was a 19-year-old bird that had also hatched in Massachusetts. It is safe to say that the eagle reintroduction program that MassWildlife conducted in the 1980s has not only reaped benefits in Massachusetts, but throughout New England.

Want to get involved? You can support the conservation of bald eagles and other rare species in Massachusetts by reporting sightings and donating to MassWildlife’s Natural Heritage and Endangered Species Program. 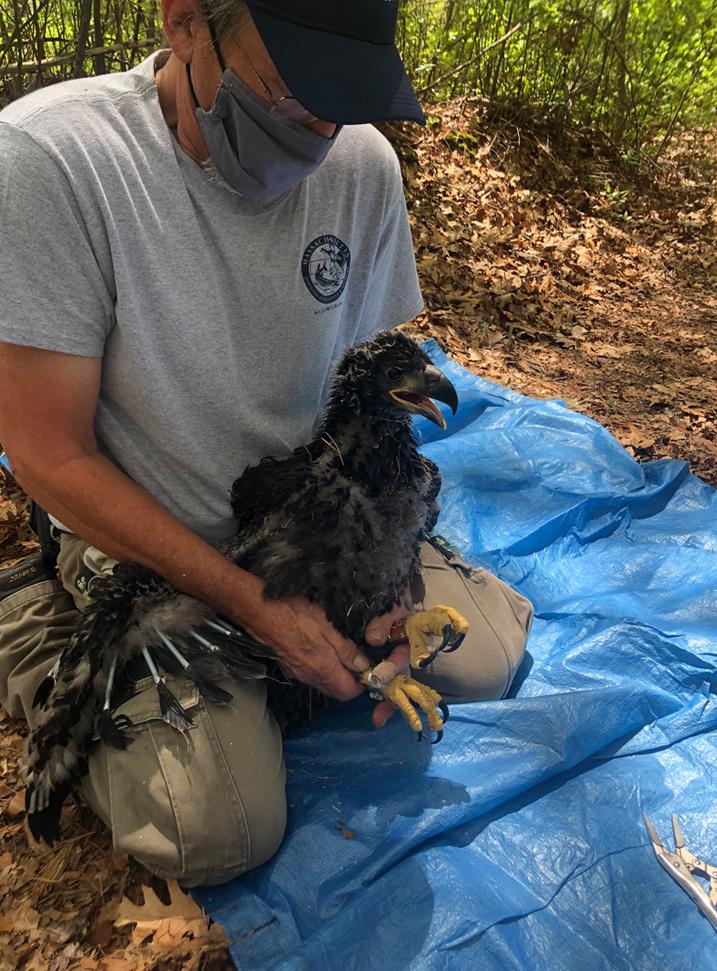 MassWildlife biologists recently visited the historic nest in Barnstable to band the eaglet. The young bird received a leg band numbered "73B" to identify it in the future. An orange leg band signifies the eagle was banded in Massachusetts, and a silver band is used for federal identification. Biologists and volunteer observers use banding information to help track, monitor, and conserve these protected birds.​