BOSTON, MA— June 16, 2022—Massachusetts had a total of 17,760 initial claims for regular Unemployment Insurance (UI) during the month of May, a decrease of 2,832 claims from the previous month. Most initial claims (IC) this month were seen in Construction, Food and Accommodation, and Healthcare and Social Assistance. Continued weeks claimed (CWC) decreased by 7,213 from the previous month to 202,269. Most CWC were seen in Construction, Administrative and Waste, and Healthcare and Social Assistance.

The Pandemic Unemployment Assistance (PUA) program, which was implemented on May 21, 2020, had 1 initial claim filed and 738 continued weeks claimed, a decrease of 717 CWC from the month. The PUA benefits program ended on September 4, 2021.

The Pandemic Emergency Unemployment Compensation (PEUC), which was implemented on May 21, 2020, had a total of 50 initial claims. CWC dropped by 184 to 288 claims. The PEUC program ended on September 4, 2021.

The federal/state Extended Benefits (EB) program, which ended on July 17, 2021, had no IC changes from the previous month while CWC increased by 10 claims. 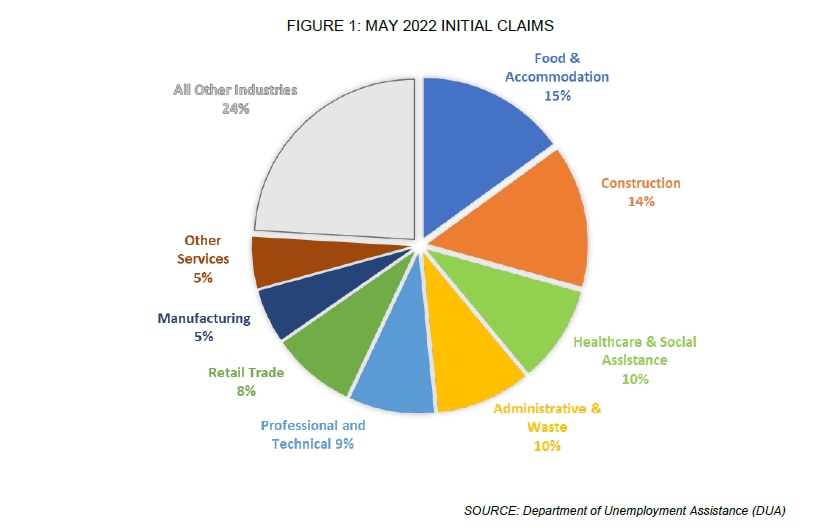 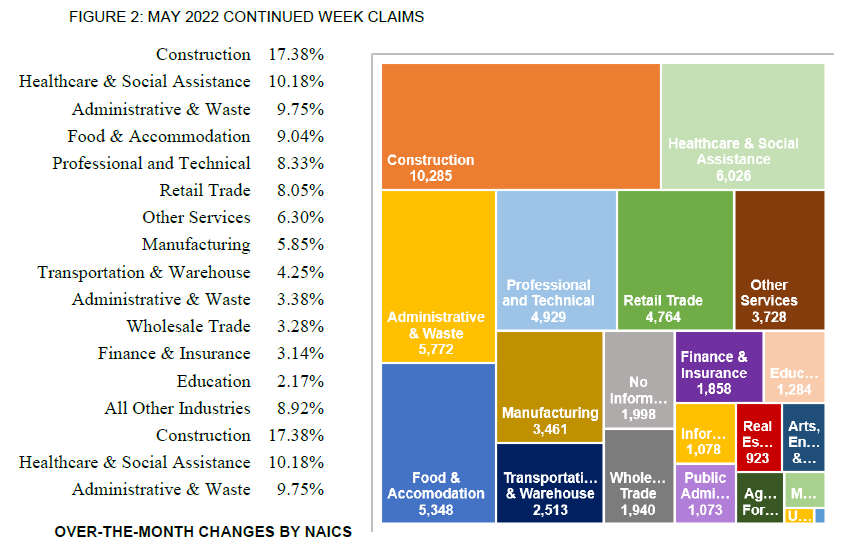 Ten industries saw increases in initial claims over the month of May. Food and Accommodation leads with the greatest number of initial claims, up 1,097 (+70.8%) claims from April. This is followed by Administrative and Waste (+12.8%), and Education (+37.3%). The largest drop in initial claims is seen in Agriculture, Forestry, Fishing, and Hunting (-63.7%). 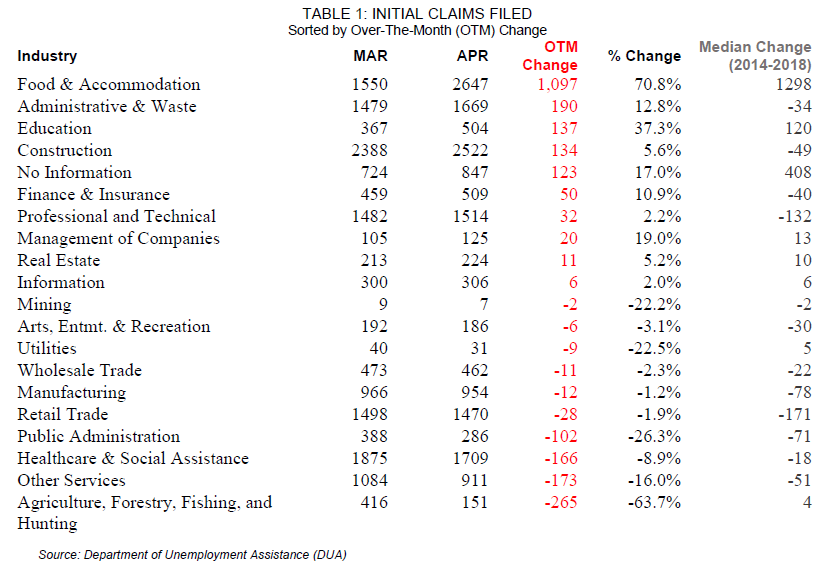 All sectors except for Finance and Insurance and Education saw a decrease in CWC over the month. Education saw a 5% increase OTM, and the Finance and Insurance industry saw a 3% increase. Construction (-31%), Transportation and Warehousing (-56%), and Administrative and Waste (-29%) saw significant drops in CWC over this period. The largest number of CWC of 6,843 are seen in Middlesex County over the month of May. Middlesex County has almost 25% of Massachusetts’ labor force and 16% of the unemployed, according to Massachusetts’ Local Area Employment Statistics (LAUS). 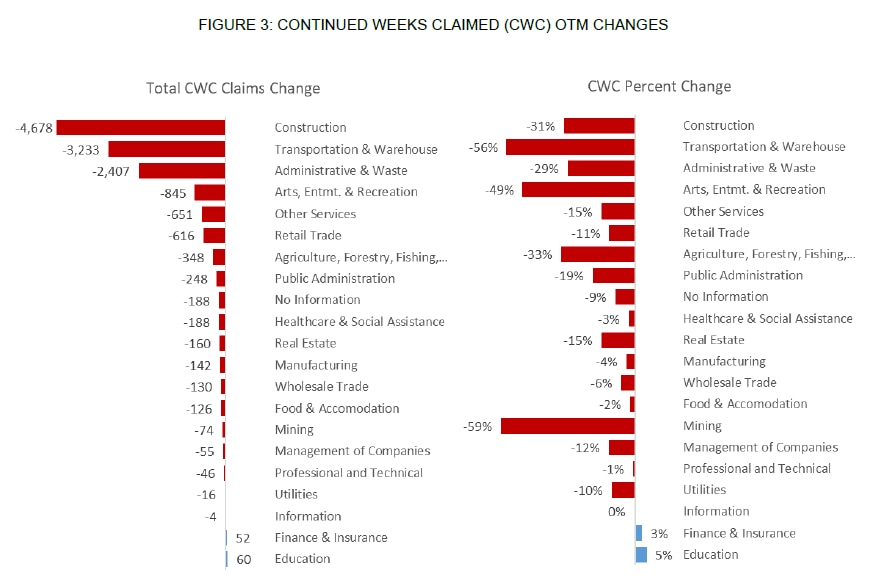 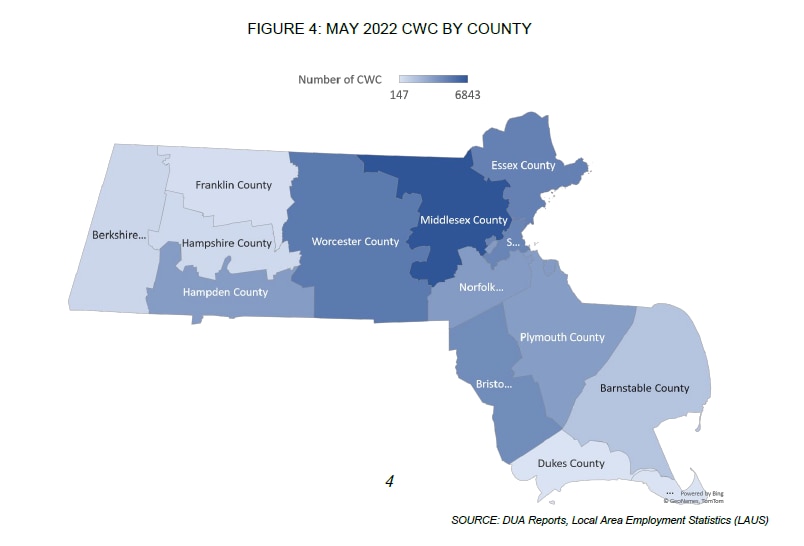 At the peak of the pandemic, the industries with the highest number of CWC were Construction, Retail Trade, Food and Accommodation, Health Care and Social Assistance, and Other Services. Construction and Administrative and Waste Management sectors see cyclical increases as expected during the early months of 2022. The steady decline in CWC in other sectors could be due to the unemployed reaching their 26-week benefit limit or switching to different sectors. 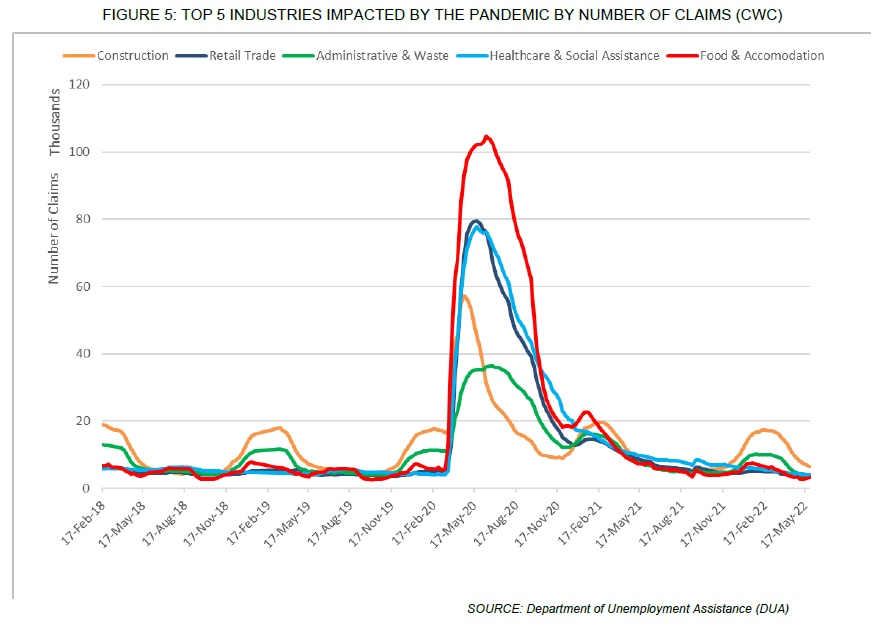 DEMOGRAPHIC BREAKDOWNS
The following includes demographic statistics on ethnicity, gender, and race for all unique claimants who filed for a continued week during May’s four week reference period (four weeks ending May 28th, 2022).