For the week ending March 27, Massachusetts had 18,148 individuals file an initial claim for regular Unemployment Insurance (UI), an increase of 2,660 from the previous week.  Increases were seen in almost all sectors.  The largest increases in initial claims filings by sector were seen in Information Not Available (either lacking employer or industry information), up 637; Construction, up 357; Other Services, up 306; Retail Trade, up 248 and Health Care and Social Assistance, up by 246.  Utilities, and Finance and Insurance were the only two sectors that posted small decreases in initial claim filings.  Since March 15, 2020 over 2 million initial claims for regular UI have been filed.  Continued weeks claimed for the week ending March 27, at 117,087, decreased by 8,611 over the previous week, the fourth consecutive week of decline

The Pandemic Emergency Unemployment Compensation (PEUC), which provided up to 13 weeks of extended benefits, was implemented on May 21, 2020.  PEUC initial claims filed at 26,551 for the week ending March 27 were 4,200 more than the previous week. Since implementation, PEUC filings now total 475,421.  PEUC continued weeks claimed were at 198,327.

For weeks ending February 6th through March 13th, a system error led to incomplete data being reported for the PEUC program. This did not impact any claimant’s ability to claim or receive benefits through the program. The corrected values for initial claims and continued weeks claimed in those weeks were:

The federal/state Extended Benefits (EB) program, which first triggered on May 3, 2020 due to the high volume of claims, for the week ending March 27 had 5,675 initial claims filed and 28,296 continued weeks claimed.

(Please note that initial claims activities numbers for the current and prior week are estimated values and included here as reported to the Employment and Training Administration.) 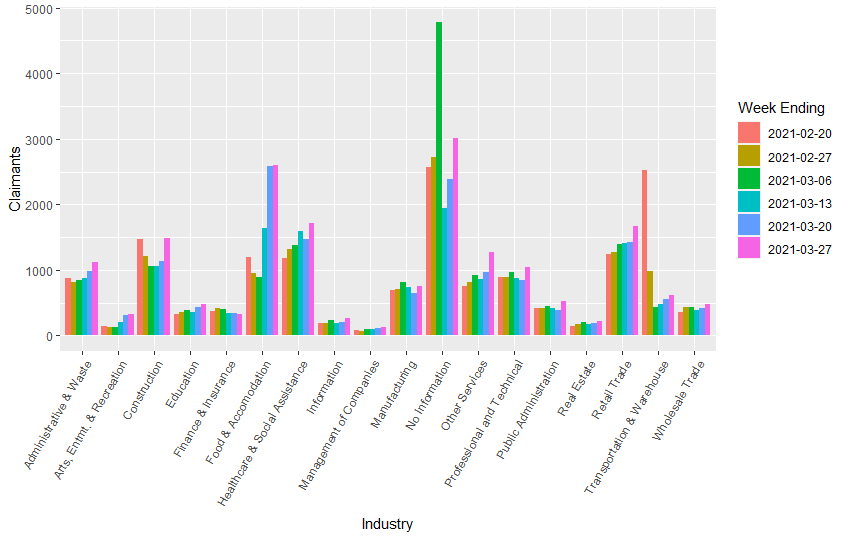 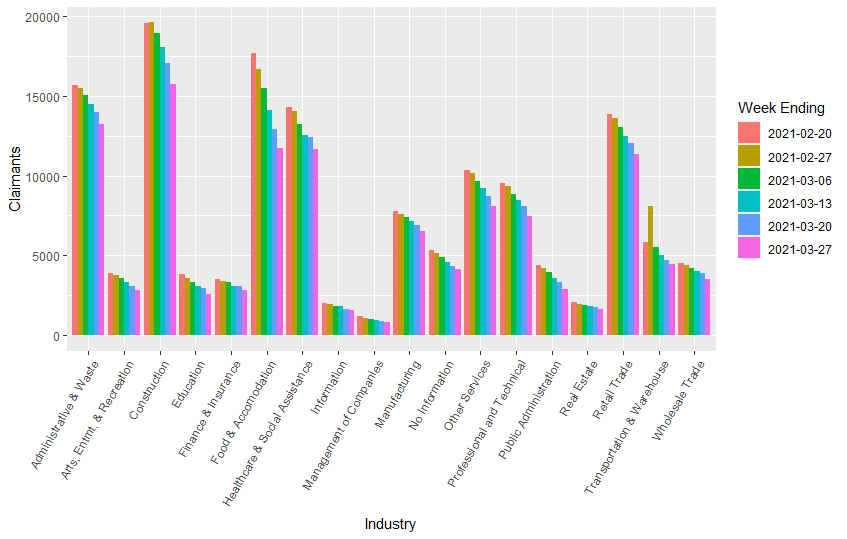 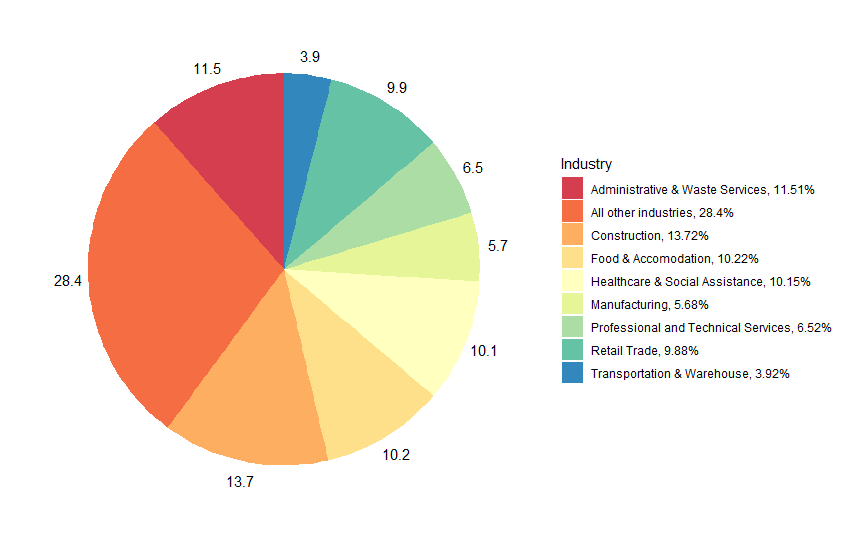 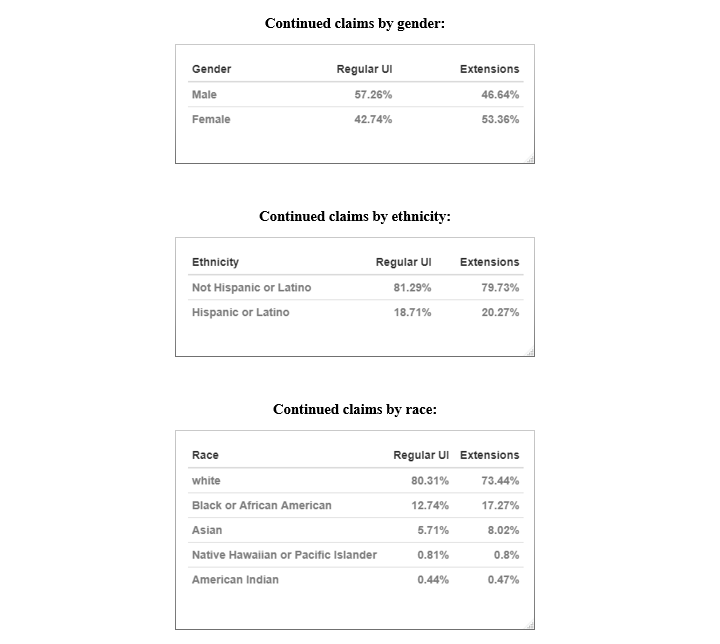 Here we present the breakdown by gender, ethnicity, and race of continued claims for Regular UI between March 8th, 2020 and March 20th, 2021: 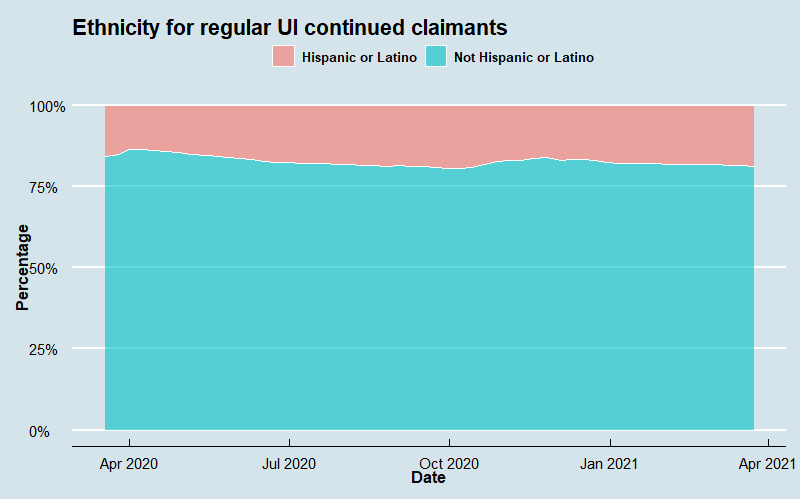 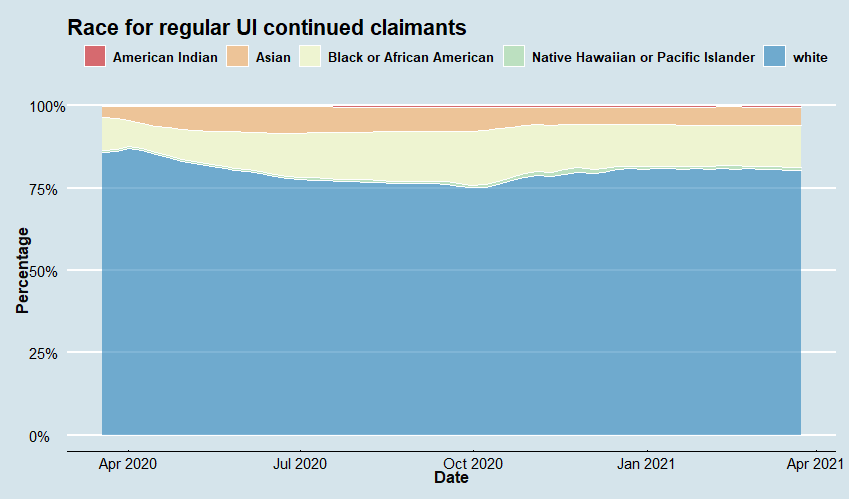 Here we present the breakdown by gender, ethnicity, and race of continued claims for the PEUC and EB programs, which cover the long term unemployed, between May 31st, 2020 and March 20th, 2021: 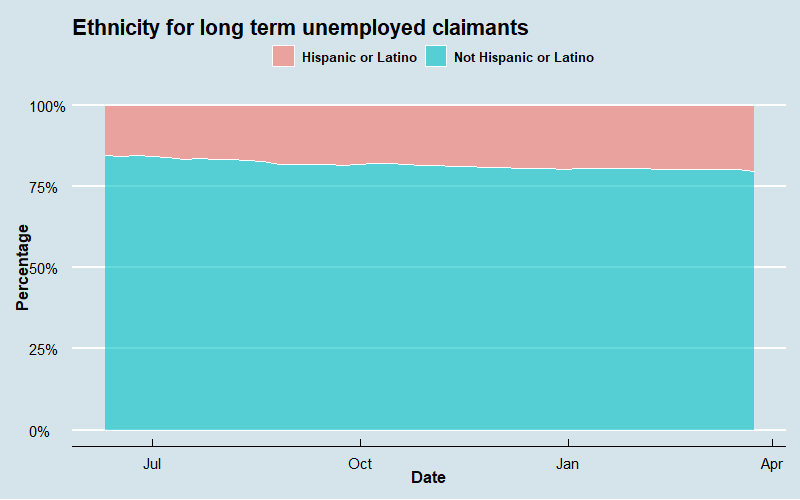