This page, New Leadership Announced at the Division of Banks, is offered by
Press Release

Press Release New Leadership Announced at the Division of Banks

BOSTON — Today, Undersecretary Edward A. Palleschi announced senior leadership appointments at the Division of Banks (DOB). Mary Gallagher has been promoted to Commissioner, and Cynthia Begin will be elevated to First Deputy Commissioner. This announcement follows Commissioner Gallagher’s swearing in, conducted by Undersecretary Palleschi.

“I am thrilled to name new senior leaders at OCABR’s Division of Banks,” said Undersecretary Palleschi. “We have elevated internal talent to fill these roles, which is a tribute to the proven abilities of our agency’s leaders. We are also grateful to Merrily Gerrish who stepped up as acting commissioner for the last five months. I look forward to partnering with Mary and Cindy, and the entire DOB team, as we advance the Baker-Polito Administration’s efforts to protect consumers, regulate industry and enable professionals to do business in a straightforward manner.”

Mary Gallagher was appointed Chief Operating Officer of the Division of Banks in 2015. In this role, Gallagher oversaw the agency's operational and administrative team, including fiscal oversight, budget and accounting, human resources and staff development, information technology and security, facilities, and vendor management and procurement. She also co-chaired DOB’s strategic planning and was a member of the agency’s policy group.  Before joining the DOB, Gallagher spent 17 years in the financial services and securities industry in Boston, New York, and London. Her work included foreign exchange and equity market sales and trading roles at Morgan Stanley, State Street Global Markets, and Deutsche Bank Alex Brown. Gallagher holds a bachelor's degree in psychology from Harvard University.

Cynthia Begin, Esq. has served as Chief Risk Officer for the Division of Banks since 2011. Begin has spent more than 24 years in financial services regulation at the Division of Banks. She is responsible for the oversight of regulated banks, credit unions, and over 9,000 non-depository licensees as well as the agency’s Enforcement and Investigation Unit. She has served as a Senior Deputy Commissioner and as the Division's Assistant General Counsel.  Prior to joining the Division, she worked as Vice President and Legal Counsel for the Massachusetts Share Insurance Corporation and at a Worcester-based bank holding company. Begin serves as a board member and past president of the American Association of Residential Mortgage Regulators, and is a recipient of the 2014 Distinguished Service Award. She holds a Bachelor of Science in Business Administration from Nichols College and a Juris Doctorate from Suffolk University Law School.

Merrily Gerrish has more than 30 years of experience in the financial services industry having worked at The Office of the Comptroller of the Currency, Bank of Boston, Fleet Bank, and Bank of America.  She has served the Commonwealth for five years as Deputy Commissioner and General Counsel.  Gerrish is a graduate of Connecticut College, has a Master’s in Business Administration from Boston University and a Juris Doctorate degree from Suffolk University Law School.

The Office of Consumer Affairs and Business Regulation (OCABR) oversees five regulatory agencies: Division of Banks, Division of Insurance, Division of Professional Licensure, Division of Standards, and the Department of Telecommunications and Cable. These agencies have a combined operating budget of over $76 million and together have approximately 600 employees.  OCABR also oversees the state’s Lemon Laws and Lemon Law Arbitration, Data Breach reporting, Home Improvement Contractor Programs, and the state’s Do Not Call Registry. OCABR helps Massachusetts consumers, home improvement contractors, people seeking help with a recently purchased car, tenants and landlords, and businesses seeking to report a data breach or interested in the data breach notification law. Learn more about OCABR at mass.gov. 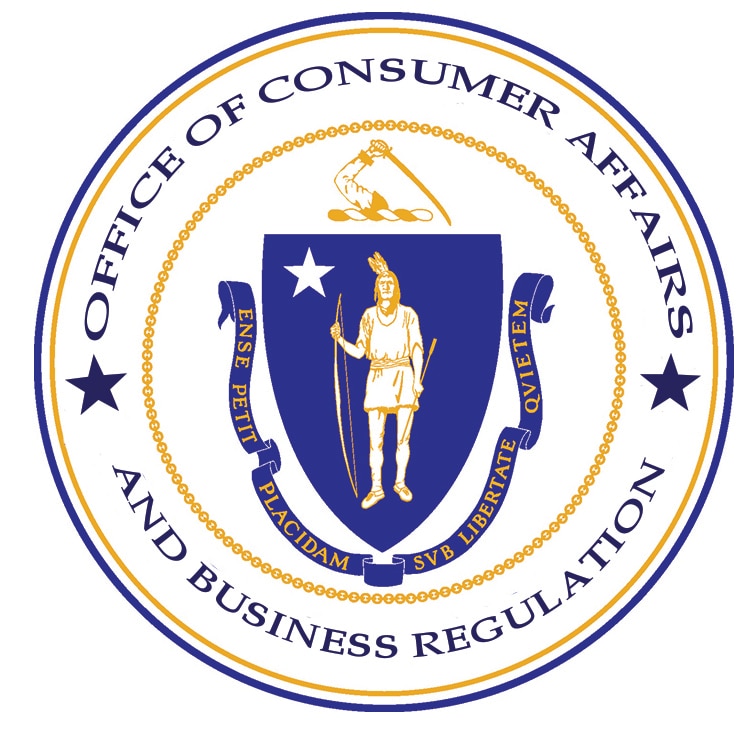 The Division of Banks (DOB) is the chartering authority and primary regulator for financial service providers in Massachusetts. DOB's primary mission is to ensure a sound, competitive, and accessible financial services environment throughout the Commonwealth.
More