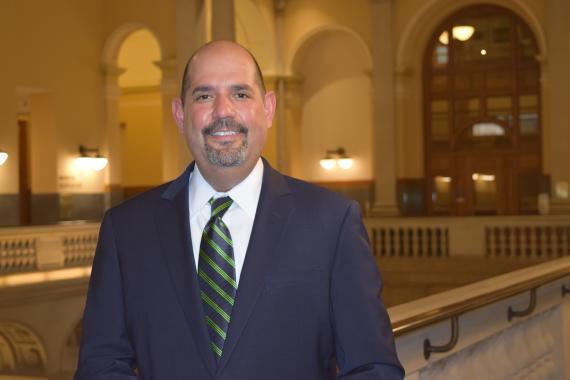 John Bello was appointed as Court Administrator of the Massachusetts Trial Court effective March 2021.  He partners with the Chief Justice of the Trial Court to oversee 6,300 court staff, 97 courthouses, and a $750 million budget for seven court departments and the Massachusetts Probation Service.  The Court Administrator is responsible for the administrative functions that support the Trial Court mission – Justice with Dignity and Speed. These include budget preparation and oversight, labor relations and human resources, information technology, facilities management, capital projects, and security.  John also serves as co-chair of the court’s Trauma Task Force.

In 2017, John was named Associate Court Administrator and guided the efforts of the department heads within the Office of Court Management and coordinated their support of the court departments. He also guided the development and implementation of the Trial Court’s Strategic Plan 3.0, introduced enterprise project management, and led major operational initiatives in collaboration with leaders across all court departments.

John joined the Trial Court in 2013 as the Director of Facilities Management & Capital Planning overseeing maintenance and capital improvements for 60 state-owned facilities and working with county and private landlords to manage another 40 court buildings. He oversaw the development of a 20-year Court Master Capital Plan in concert with the state’s Division of Capital Asset Management & Maintenance.

From 2001 to 2013 John served in management roles of increasing responsibility at the Massachusetts Port Authority, Massport, which oversees the state’s three airports and the port terminals in Boston.  He received a bachelor’s degree in Business Administration from Daniel Webster College.