This page, Monica Bharel MD, MPH, Commissioner of the Massachusetts Department of Public Health, is offered by

Commissioner of the Massachusetts Department of Public Health 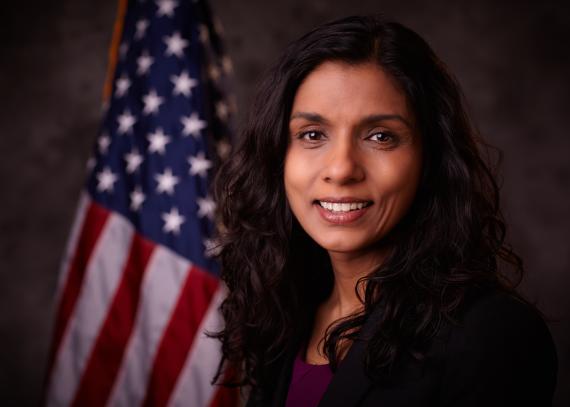 As Commissioner of the Massachusetts Department of Public Health, Dr. Monica Bharel serves as the Commonwealth’s chief physician. She helps lead the state’s aggressive response to the opioid crisis and is dedicated to reducing health disparities and developing data-driven, evidence-based solutions for keeping people healthy. She was appointed to her position by Governor Charlie Baker in February 2015.

Dr. Bharel oversees a public health workforce of nearly 3000 and an expansive department comprised of eight bureaus and offices responsible for a range of programs, from environmental health to infectious diseases, injury prevention, to maternal and child health. In addition, the department licenses health professionals and facilities that impact public health, and operates the state public health laboratory and four public health hospitals.

Under Dr. Bharel’s leadership, the Department was awarded national accreditation by the Public Health Accreditation Board and, in 2017, Massachusetts was named the healthiest state in the nation by America’s Health Rankings Annual Report which cited among other measures, the state’s low prevalence of obesity and high vaccination rates. Massachusetts is one of few states to experience a decrease in opioid overdose deaths following multiple new initiatives including its Prescription Drug Monitoring Program, creation of core competencies to enable medical students with enhanced training regarding prescription drug misuse, and expanded access to medication-assisted addiction treatment and enhanced recovery support services.

Also in 2017, Dr. Bharel spearheaded creation of the Public Health Data Warehouse, a unique state-of-the-art tool involving multiple linked data sets across state government. This tool, developed within the newly created Office of Population Health, has proven invaluable for helping combat the opioid epidemic, garnering national attention as a model for the use of data to better understand complex health issues.

Dr. Bharel has been a voice for effective health policy, advocating for raising to 21 the age for tobacco and e-cigarette sales to reduce teen smoking and vaping; and passage of new regulations for testing blood lead levels in young children. She has led the transformation of community health investments to increase healthful opportunities for all.

Dr. Bharel has practiced general internal medicine for more than 20 years including at Massachusetts General Hospital, Boston Medical Center, in neighborhood health centers, the Veterans Administration, and at nonprofit organizations. She has served on the faculty of Harvard Medical School, Boston University Medical School, and Harvard School of Public Health, and has been recognized for her passionate dedication to underserved and vulnerable populations. Prior to becoming Commissioner, she served as the Chief Medical Officer of Boston Health Care for the Homeless, the largest nonprofit organization for homeless individuals in the country.

She received her Master of Public Health degree through the Commonwealth Fund/Harvard University Fellowship in Minority Health Policy. She holds her medical degree from Boston University School of Medicine and completed a residency and chief residency in internal medicine at Boston City Hospital/Boston Medical Center.

DPH promotes the health and well-being of all residents by ensuring access to high-quality public health and healthcare services, and by focusing on prevention, wellness, and health equity in all people.
More Information