Assessment of Smelt Spawning Habitat in the Saugus River

In 2012, the Saugus River Watershed Council, in partnership with the National Park Service and the MA Division of Marine Fisheries (DMF), conducted an assessment of smelt (Osmerus mordex) spawning habitat in the Saugus River and the Shute Brook tributary.

Monitoring observations during the spawning season (March 7 – April 18) identified just over 3,000 m2  of viable smelt spawning habitat in the project area, about 34% more than identified by DMF between 1988 and 1990 (Chase, B.C. 2006 Rainbow Smelt Spawning Habitat on the Gulf of Maine Coast). The team explored and  documented the extent of spawning habitat and developed recommendations for protection and restoration of the historic smelt fishery. The project took into account  the potential impacts of current and proposed construction projects along the waterfront. 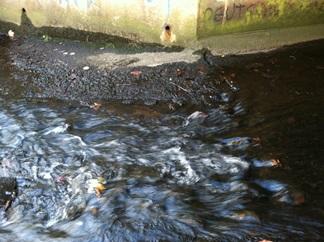 Over the last several years degraded conditions in Shute Brook had rendered the area as questionable smelt habitat. However, the project team found smelt eggs in this area in spite of extensive construction and degradation over the years. One area in particular was dubbed “the nursery” by the team due to the thousands of eggs found there, thanks to the presence of riffles, cobbles, and trees providing shade. Recommendations to improve, expand, and enhance smelt spawning habitat in the main stem of the Saugus River and Shute Brook include: (1) expanding riffle habitat and improving slope characteristics at specific locations to aid upstream passage, (2) protecting the vegetated buffer, (3) improving vegetation on the berm of the Saugus Iron Works, and (4) continuing monitoring at regular intervals.