TND, also known as "new urbanism", "neo-traditional" or village-style development, includes a variety of housing types, a mix of land uses, an active center, a walkable design, and often a transit option within a compact neighborhood scale area either as infill in an existing developed area or as a district scale project.

Modern zoning of residential, commercial, and industrial spaces has created automoblie dependence. This design practice results in the loss of community vitality and makes neighborhoods unwelcoming to pedestrians and bicyclists. It also increases traffic. However zoning utilizing TND development that mixes uses in a compact area and forms can achieve a high quality neighborhood. 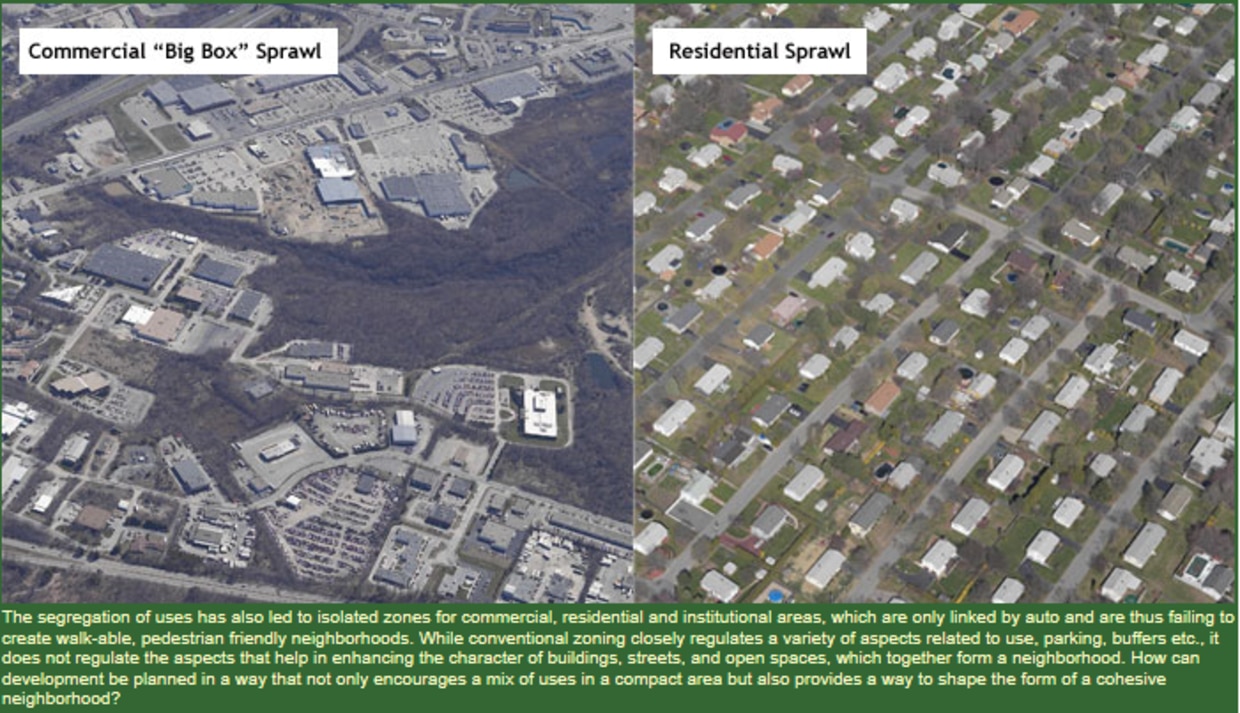 Through form-based zoning and other standard bylaws, zoning can be an extremely effective tool that communities can use to implement TND. TND can guide new development patterns that are civic-oriented, pedestrian-friendly, economically vibrant, environmentally sustainable, and evoke a unique sense of place. However, certain principles that have been applied to New Urbanist developments across the United States will not meet the needs of most communities in Massachusetts without modification. New England communities have a long history that has already defined the form and fabric of neighborhoods in important ways.

Traditional Neighborhood Development helps to create vibrant mixed-use neighborhoods with higher densities and a range of complementary uses. TND is characterized by compact, pedestrian-oriented developments that provide a variety of uses, diverse housing types, and are anchored by a central public space and civic activity. TND is based on the principle that neighborhoods should be walkable, affordable, accessible, distinctive, and in Massachusetts, true to the significant historic context of each community. 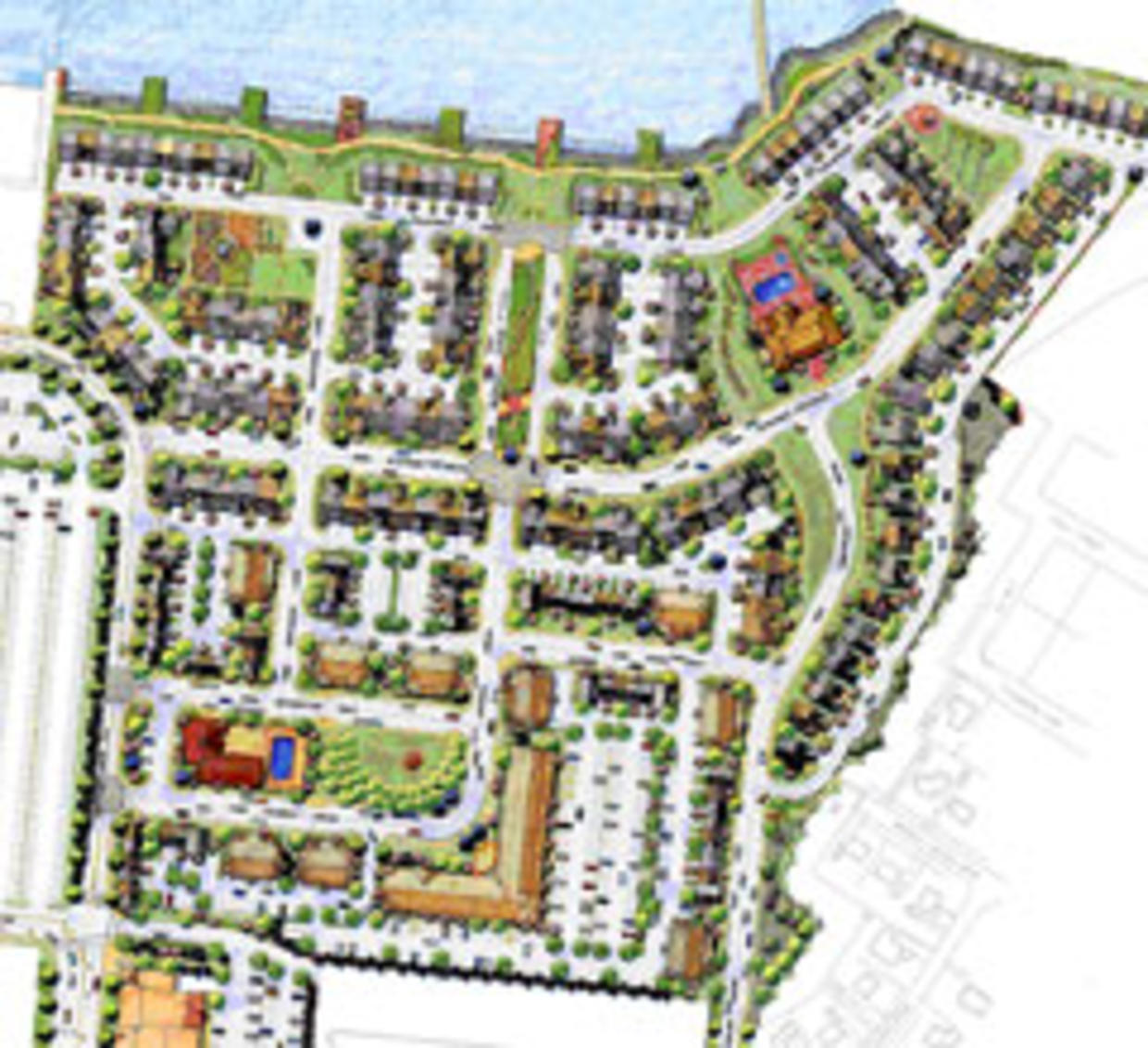 The following are commonly found in TND:

TND can be used to revitalize existing town centers and neighborhoods or build new ones at transit nodes and in other locations. Current and future public transit stops are important places to consider during the planning stages to maximize access to alternatives forms of transport. However, TND must be distinguished from Transit Oriented Development - TND need not focus as close on transportation areas and parking as components of urban design.

TND will not be appropriate for all neighborhoods in all contexts, though. Many of the design criteria and standards of TND can be applied to other development projects. However, not every neighborhood is suitable for the density required for a mixed-use TND development to succeed.

TND's success is marked by its ability to blend into and enhance the unique spaces that it inhabits. This criteria of success becomes especially important in New England, where towns and cities have a strong sense of place. TND in New England must be customized to each place so that the rich character of towns and cities is strengthened, not fabricated, by Traditional Neighborhood Development.

Classic New England villages have retained their strong identities through time, resisting change and the impulse to completely replace old with new. Each village’s character is informed by local history and geography and coastal, riverfront, highlands, and farming communities each convey a very different sense of place.

The modern village integrates contemporary uses into the historic fabric of each community, with new residential and commercial developments built around the historic village district. The richness of Massachusetts ’s landscape, history, and local culture provide a variety of ways for TND to be implemented in this state.

What are the basic TND guidelines?

A larger market area is often necessary to support businesses and provide outside job opportunities for residents. Consequently, access is provided in multiple ways, such as regional transportation systems, trains, buses, and highways, to provide that choice and opportunity.

How and where is TND working in Massachusetts?

Here are some ways that TND is actually working in Massachusetts at very different scales and situations:

Large scale / Urban - Urban areas are usually characterized by a high degree of existing build-out, which makes it difficult to assemble raw land on which to build a new full-scale traditional neighborhood. Urban areas that provide good opportunities for TND include:

Within suburban areas, large-scale vacancies present great opportunities in which to introduce TND. These include closures of:

The greatest potential for TND in Massachusetts is in the repair of existing urban fabric. Infill and redevelopment of obsolete buildings present tremendous TND possibility.

Examples of Large-scale / Urban Projects – In Massachusetts , many large-scale projects have been able combine TND and land use principles into economically successful developments.

Mid-scale / Suburban – TND is an alternative to and a means of combating the problems associated with suburban development. The suburbs are growing at a significantly faster pace than urban and rural areas, and this growth offers ample opportunity in which to apply TND. Important elements of local character or history in established residential or commercial areas should be incorporated into the TND to distinguish the location.

Examples of Mid-scale / Suburban Projects – Medium-scale projects that may have a more limited mix of uses can still fulfill many of the principles of TND.

Small-scale / Rural – Traditional suburban development patterns have migrated into rural areas and TND is as applicable in smaller towns as it is in suburban cities. Development on greenfield sites located in rural areas can be guided by TND principles in order to minimize environmental impacts associated with new development. A more apt use of TND may be to re-establish or expand existing village centers as centers of community life. 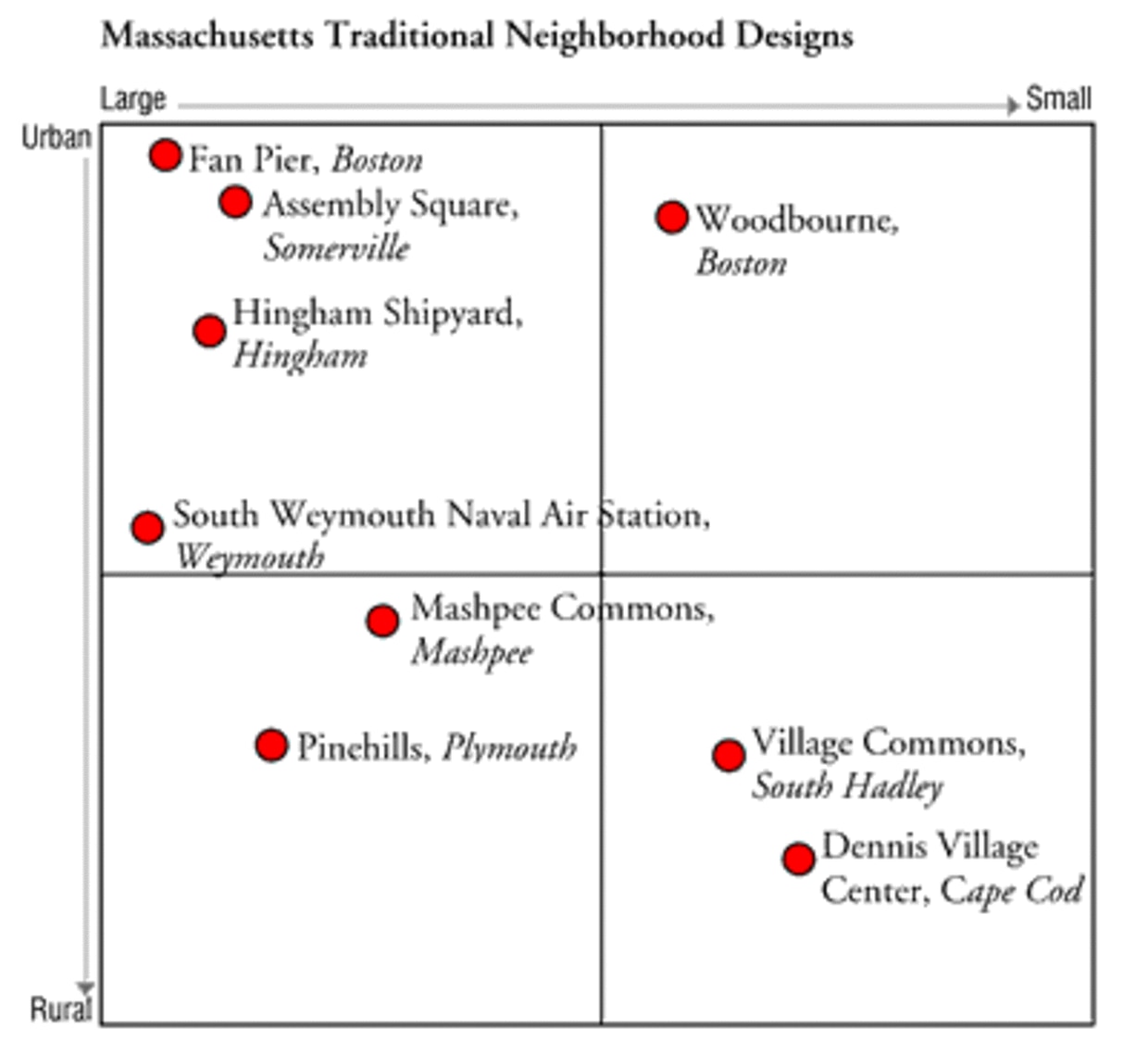 What should your town look for to create a TND project?

Project Sites – TND’s are usually about 10 to 15 acres in size when done on a town scale. However, the incorporation of existing residential or commercial blocks into a TND means a project does not require a wholly undeveloped site, and the projects do not have to be completed by a single entity. The key is designing the new elements to fully connect with the old. Valuable TND projects may be infill development projects within existing downtown or neighborhood areas.

Comprehensive Design Standards – TND neighborhoods are carefully designed to function in ways that provide a high quality of life. It is therefore important that local governments have the authority to regulate many design aspects and aesthetics. TND often involves local regulations govering a wide range of urban design choices – from façade and paving materials, to geometry and dimensions, to specific organization of uses. These should be specific to the community based on local design principles. The local history should be an important consideration in the design of TND projects as the resulting community–oriented design and complementary architecture will then provide for a strong sense of place.

Diversity in Housing - The variety of types of housing units typical of TND gives people and households at all stages of life housing alternatives suited to their needs, thus providing stability to a community. The proper density of housing (typically very high) will also support the commercial and civic functions at the TND.

Accessibility and Mobility – TND’s require local connectivity and access to all areas, but cannot stand alone. Consequently, along with bicycling, walking, and vehicle access, TND’s should provide additional access with choices including public transit. Trains and buses provide transit options, but must be considered along with regional highway access.

Because of the complexity of these projects, the recommendation is to follow three steps in the creation of the TND zoning:

The purpose of a charrette is to solve a design-related problem facing a community. The public is invited to attend and participate and the charrette process is best if facilitated by trained individuals.

The typical agenda of the charrette is to first educate participants on the process, and then incorporate their contributions in order to verify decisions. A charrette usually lasts a few hours or even several days and culminates with the presentation of a final plan, which is a compilation of the best ideas offered during the charrette. The results of this process should then inform the drafting of the bylaws.

Form-based zoning creates the physical context, Design Guidelines allow for more granular control of the built elements, and Performance Standards ensure the best management of the land and built environment.

• Concentrate Development and Mix Uses: TND increases development densities within the village or town center to promote the ability to work, shop, and live in one neighborhood and provides economical opportunities for mixed use redevelopment of existing properties. In addition, TND is compact, encourages reuse and rehabilitation of existing infrastructure, conserves land, integrates uses, and fosters a sense of place.

TND increases the quantity, quality, and accessibility of open space, expands land and water conservation and promotes development that respects and enhances the region's natural resources.

• Use Natural Resources Wisely: TND encourages efficient use of land and promotes buildings and infrastructure that uses land, energy, water and materials efficiently.

• Expand Housing Opportunities: By linking commercial development in the district to the provision of rental and affordable housing opportunities, TND supports the construction and rehabilitation of housing to meet the needs of people of all abilities, income levels and household types. TND coordinates the provision of housing with the location of jobs, transit and services and fosters the development of housing, particularly multifamily, that is compatible with a community's character and vision.

• Provide Transportation Choice: By improving pedestrian facilities in the village and increasing the viability of transit by increasing residential density, TND maintains and expands transportation options, in all communities, including land- and water-based public transit, bicycling, and walking.

• Increase Job and Business Opportunities: By providing for increased intensities of development and encouraging the creation of new jobs in the village center, TND attracts businesses with good jobs to locations near housing, infrastructure, water, and transportation options and supports the growth of new and existing local businesses. TND strengthens the growth of local businesses, in addition to supporting economic development in industry clusters, which are consistent with regional and local character

• Plan Regionally: By implementing recommendations found in the Town's Comprehensive Plan and the Regional Policy Plan, TND supports the development and implementation of local and regional plans that have broad public support and are consistent with sustainability principles. It also fosters development projects; land and water conservation, transportation and housing that have a regional or multi-community benefit.