Wind power is increasingly becoming a viable and cost-effective renewable energy resource available to the Commonwealth. Capitalizing on Massachusetts' wind resources, both land-based and off-shore, will increase our energy reliability, diversify energy supply, provide financial savings to consumers, decrease consumption of fossil fuels, and reduce greenhouse gas emissions as well as other pollutants that contribute to global warming and compromise environmental health. Wind power is a critical, pollution-free, energy resource that is central to the future of our nation's energy economy, security, and local energy independence.

As fossil fuel resources are depleted, cost and demand for energy rises, and the risks of greenhouse gas emissions are increasingly threatening our global health, climate, and economy there is a growing need for development of sustainable energy resources. Among these clean energy resources is wind technology.

While wind generation opportunities are increasing in Massachusetts, there are a number of barriers to further development:

To help address the concerns of residents, protect wildlife and habitat, and facilitate appropriate and efficient siting of wind turbines, the Commonwealth has developed model wind bylaws to aid local municipalities with wind power development. Additionally, the Commonwealth's Office of Geographic and Environmental Information (MassGIS) and the Massachusetts Technology Collaborative (MTC) provide GIS data and community-level maps, which identify general on- and off-shore wind resources in Massachusetts for potential wind power development.

When wind is harnessed by turbines, wind power is created to generate pollution-free electricity or mechanical power. Currently, Massachusetts has five operating wind turbines that produce nearly 5 megawatts of electricity.

Wind technology has advanced significantly over the past two decades, driving down costs and raising efficiency, making wind power a cost-competitive option for energy generation. The core technology for wind power includes the characteristic tower mounted wind turbine, with usually three large blades mounted on a rotor, and an internal generator that produces electrical current. Essentially, the faster the wind speed, the taller the tower, and the larger the blades, the more electricity is generated.  A small difference in wind speeds makes a very large difference in the power available. Low wind speed sites are currently not economical and to achieve maximum output, wind towers are typically between 100 and 300 feet high, with blades extending up to an additional 200 feet to capitalize on more dependable and faster winds. 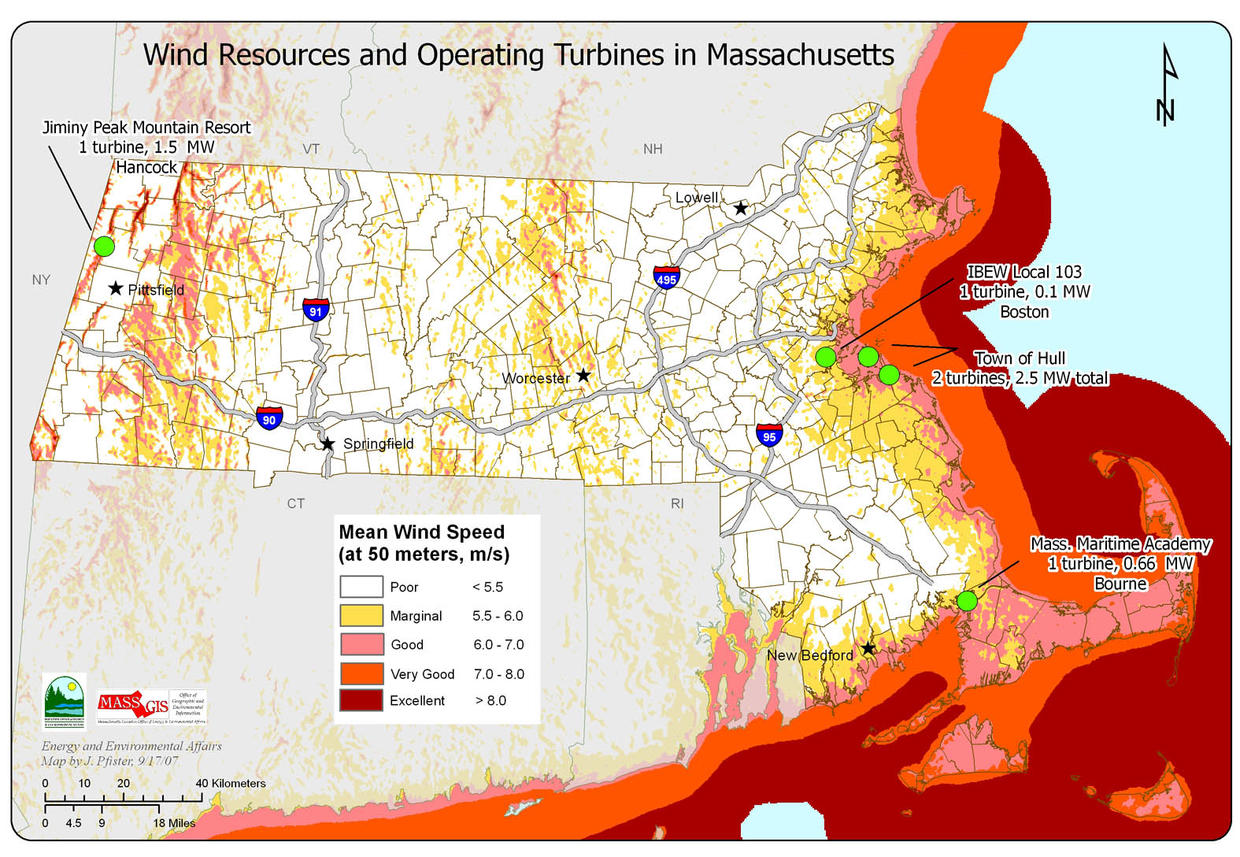 The benefits of wind power are numerous:

Utilizing wind power creates opportunities for on-site, local generation, diversifying our energy supply, increasing reliability and energy independence, and reducing demand on the electric grid. As we begin to address the threats of global warming, wind power is an essential strategy to mitigate the harmful effects of fossil fuel combustion. Additionally, there are no fuel costs associated with wind power generation, providing long-term operational cost savings that ultimately benefit consumers, making electricity more affordable. And with regular maintenance, wind turbines have an expected life of twenty years, after which, new installations or decommissioning is feasible.

Throughout the country, wind energy development is creating local jobs and new revenues for communities. From innovative technology development, manufacturing and installation, to leasing agricultural and ranch lands, wind power is inspiring economic development across many sectors. Integral to our energy future, wind power's benefits go far beyond the electricity produced, enhancing our health, environment, security, and economic prosperity. The main costs associated with wind power are manufacturing, installation, real estate, and financing. According to the American Wind Energy Association, the cost of wind power has fallen 90% over that last two decades. This decline is primarily attributed to improved technology and increased production. As the industry continues to grow, the price for wind power will continue to decline making it an increasingly competitive and reliable source of energy.

There are several factors that currently determine the cost of wind power including:

Unlike conventional energy development and production such as coal, oil, or gas-fired power plants, wind energy's costs are primarily in upfront capital construction, as there is no fuel cost associated with wind power generation.

There are many incentives to help finance wind development. State and federal investments can come in the form of:

The Federal government provides both permanent and temporary tax incentives for wind energy including a production tax credit (PTC) and a five-year accelerated depreciation schedule for wind turbines. The current PTC is a 1.9 cents per kilowatt-hour credit that supports electricity generated from utility-scale wind turbines for the first ten years of operation. In addition, any wind power generated inside the New England power grid establishes eligible Renewable Energy Certificates (RECs), currently valued at 5.4 cents per kilowatt-hour, which can be bought/sold or traded to enable the purchase of renewable energy and offset carbon emissions.

You can visit the following websites for further information about state and federal financing opportunities:

EEA, in collaboration with the state's Division of Energy Resources (DOER), has developed model bylaws to address wind turbine installation. One bylaw, Model Amendment to a Zoning Ordinance or Bylaw Allowing Conditional Use of Wind Energy Facilities, is designed to allow wind systems by special permit. Model As of Right Zoning Ordinance or Bylaw Allowing Use of Wind Energy Facilities, is for by-right permitting of wind turbines.

These bylaws are included in the Toolkit and are also available on the DOER website.

The Commonwealth's first modern, commercial-scale wind turbine began generating electricity along the Boston Harbor in the coastal town of Hull in 2001. Since, residents of Hull have added a second larger wind turbine, installed atop of a closed landfill site in 2006. At 660kW and 1.8 megawatts, "Hull 1" and "Hull 2" respectively, are prominent features on Hull's landscape providing enough energy generation to supply more than 10% of the Town's energy needs. Hull is now working to develop four off-shore turbines in adjacent shallow coastal waters that would move the Town closer to achieving 100 percent of its power from wind. In November 2006, the U.S. Department of Energy selected the Town of Hull to receive its 2006 Wind Power Pioneer Award. The award recognizes Hull's wind program for its leadership, demonstrated success, innovation, and community education and engagement.

The Massachusetts Maritime Academy (MMA) has installed a 660kW wind turbine on a 50 meter tower to provide on-site electricity generation for its campus in Buzzards Bay. In addition to energy cost savings and the environmental benefits of reduced air emissions, locating a wind turbine at the Academy provides MMA with the opportunity to incorporate wind power generation into its educational curriculum; students are trained in the operation and maintenance of wind turbines. The output of the wind turbine is used to power about 25% of the electrical load at MMA, saving taxpayers approximately $200,000 each year (including Renewable Energy Credit sales). You can track the performance of the wind turbine on a daily basis.

In August 2007, the Berkshires' first commercial wind turbine became operational. The $4 million, 1.5-megawatt wind turbine near the summit of Jiminy Peak is now providing electricity for Jiminy Peak, Inc., an 800-acre four-season resort. The 236 ton, 386-foot-high turbine will generate enough energy to reduce 7.11 million pounds of greenhouse gases per year, and save the equivalent of 383,000 gallons of diesel fuel annually. Additionally, the combination of energy conservation at the resort and the energy generated by the turbine will result in a 49% reduction in the use of energy generated elsewhere, with a significant amount of energy flowing back into the grid during times of low usage.