A Virtual Visit to the State Library

If you can't come to the State Library in person, take our web tour!

The State Library has resided in its present location in the Brigham Addition of the State House since 1895 in Room 341, our Main Reading Room, and in Room 442, our Mezzanine Level.

Welcome to the State Library of Massachusetts 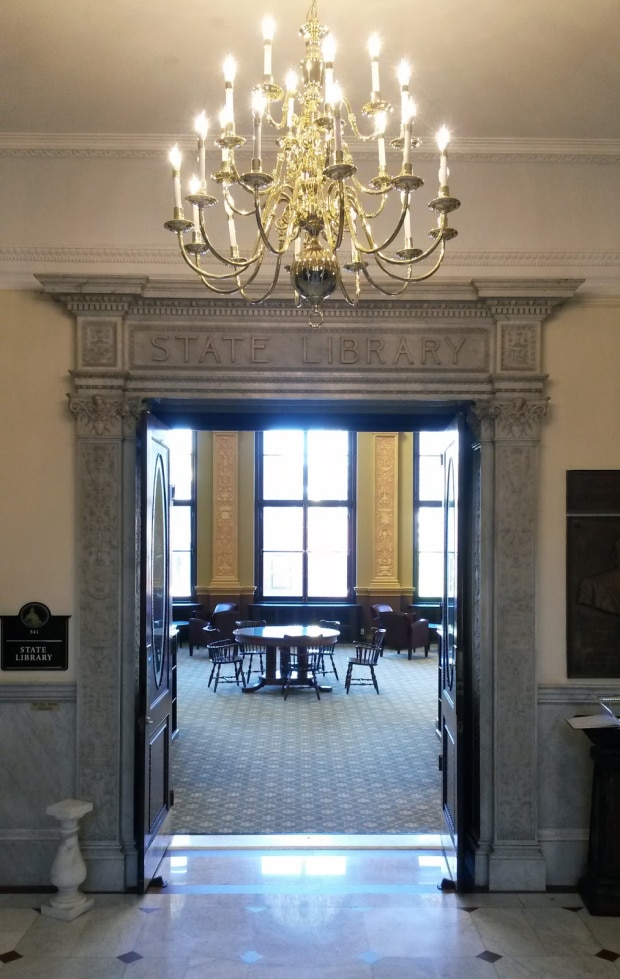 Welcome to our Main Entrance on the third floor of the Massachusetts State House. Before you enter, please view our current exhibit in the display cases that flank the left and right of the entrance. Don't worry--you can view them virtually on our Flickr site. 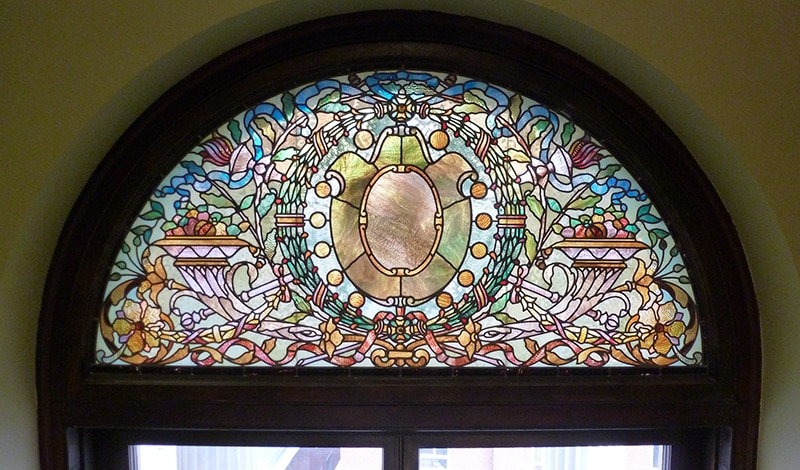 These intricate works of art were designed by architect Charles Brigham and crafted by the Lewis F. Perry Painting & Decorating Firm. The three ceiling windows each measure 15' x 9 ' and commemorate three historically significant dates in U.S. history: 1620 (the landing of the Mayflower), 1775 (the start of the Revolutionary War--pictured in the header section), and 1861 (the start of the Civil War). The stained glass fanlights that decorate the top of the windows in the reading room measure 6' x 3' and were designed to complement the Library’s original paint scheme of greens, ochres, and terra cottas. 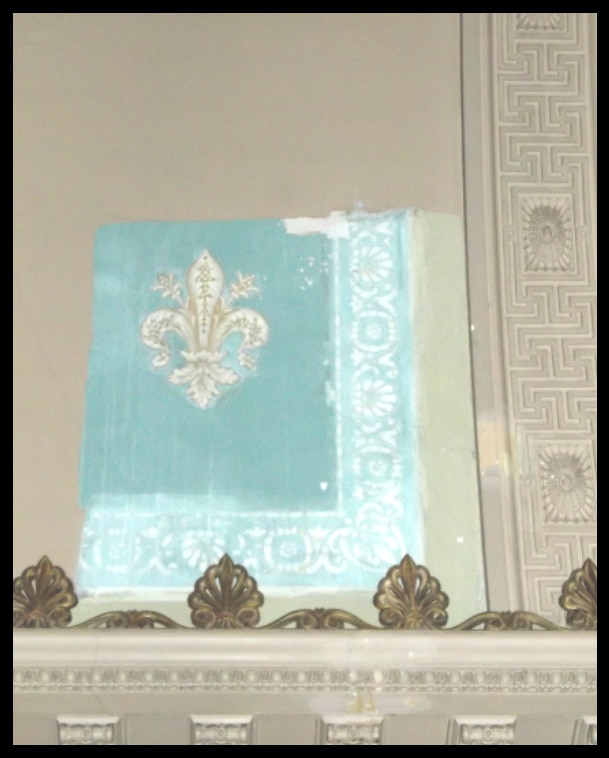 The same painting and decorating firm that created the Library's stained glass windows also painted the original decorative ceiling with a raised fleur-de-lis design. Although the ceiling was painted over in 1964, the original paint colors are still visible in one small section located above the Library's mezzanine level. 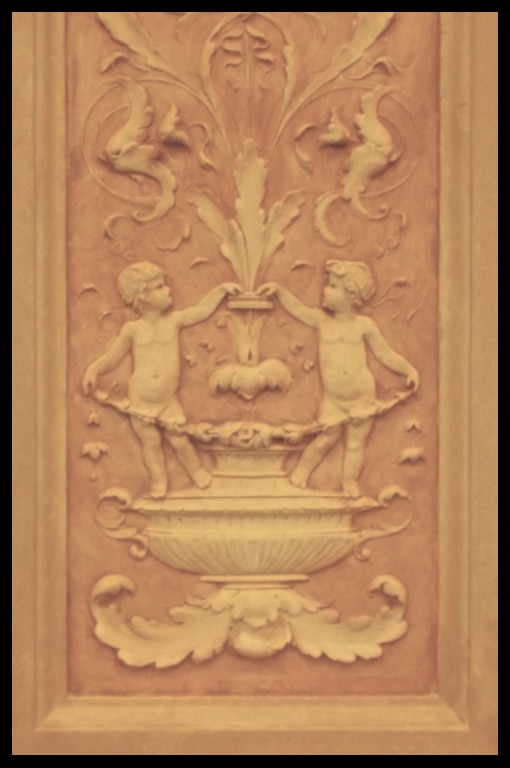 As part of the Library's 2014-2015 renovations, the many beautifully decorated columns in the main reading room were painstakingly restored to their original 1895 color scheme using a hand-painted stippling technique.

Portraits in the State Library 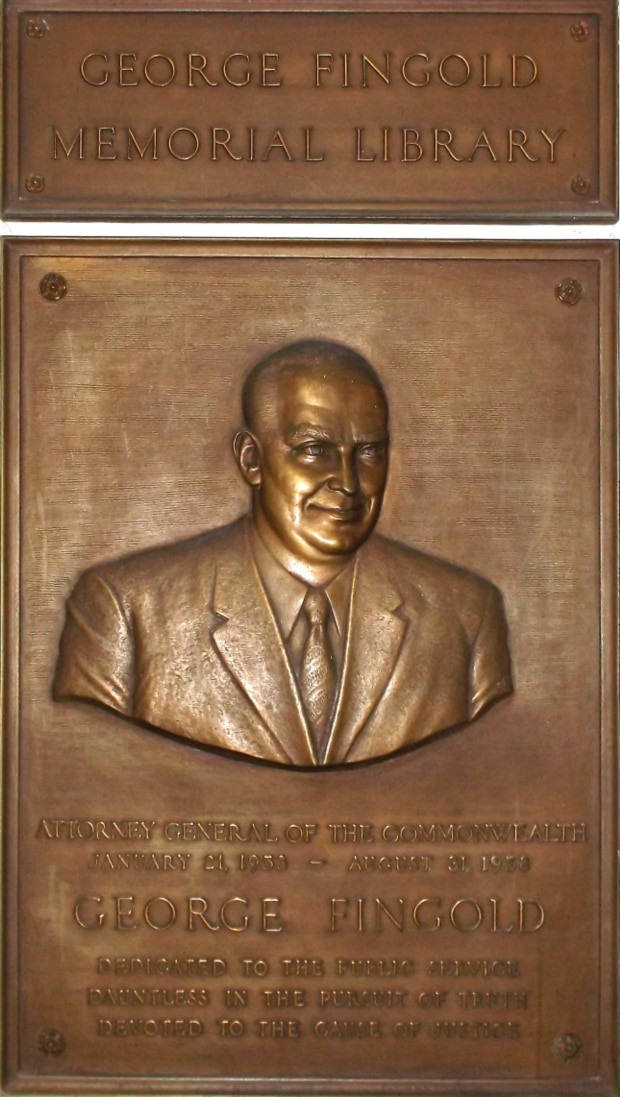 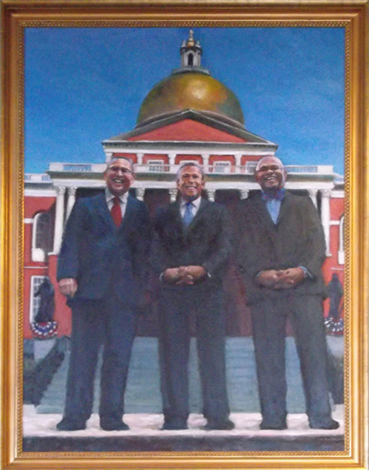 Painted by Sharman Altshuler, this portrait is based on a photograph taken on July 3, 2013, by the Governor’s Office Photographer, Eric Haynes. The photograph was taken to commemorate the first time in Massachusetts’ history that the offices of Governor, U.S. Senator, and Chief Justice of the Supreme Judicial Court were all held at the same time by African American men. The painting, which measures 56" x 40", was unveiled in the State Library on December 15, 2014. 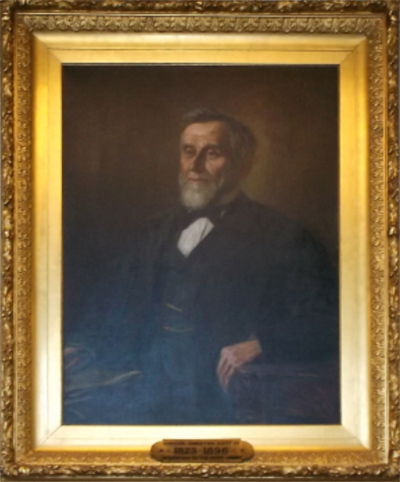 In the State Library’s reading room hangs the portrait of Charles Carleton Coffin (1823-1896). A famous freelance war journalist and correspondent, Coffin covered presidential elections, the inauguration of Abraham Lincoln, and, perhaps most noteworthy, the Civil War through first-hand accounts. The oil-on-canvas portrait was created from life by Frank Hector Tompkins and measures 38¾" x 29". The inscription on the portrait reads, “Charles Carleton Coffin, 1823-1896, bequeathed to the State Library,” which occurred in 1896.

Art in the Main Reading Room 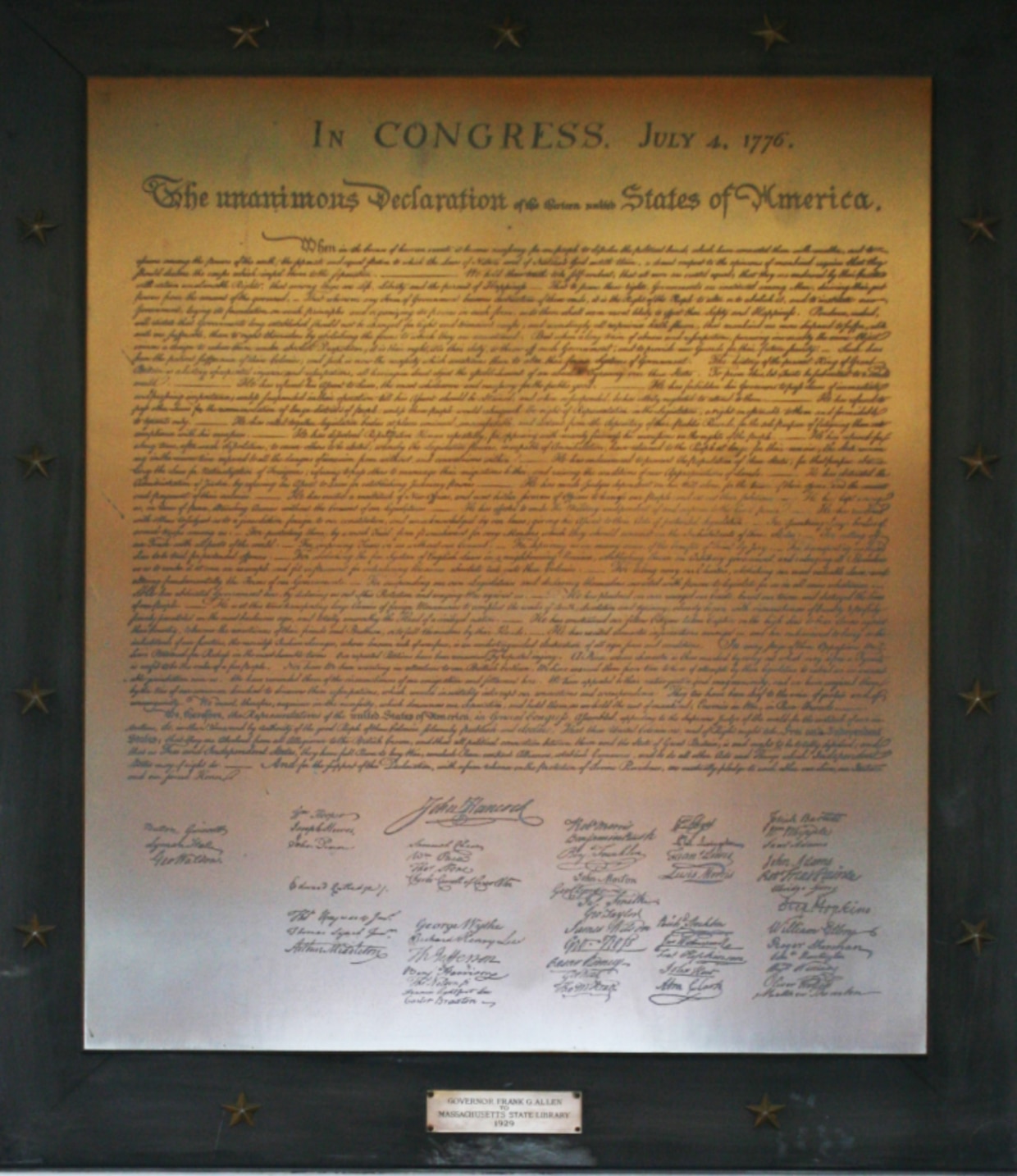 To the right of the library's entrance is a bronze plaque of the Declaration of Independence, which was given to the library in 1929 by Governor Frank Allen. This engraved bronze facsimile was designed and cast in 1928 by the Gorham Company Bronze Division, located in Providence, Rhode Island. It is mounted on wood and measures 33¾" x 27". 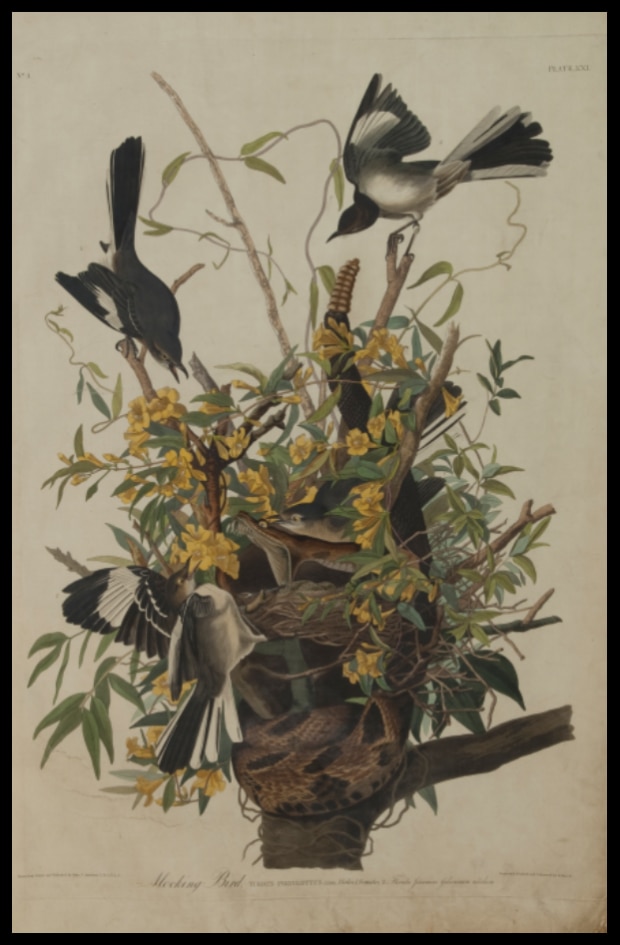 Decorating the walls of the reading room are beautiful print reproductions from the State Library's complete original double elephant folio set of Audubon's The Birds of America, printed between 1827 and 1838. 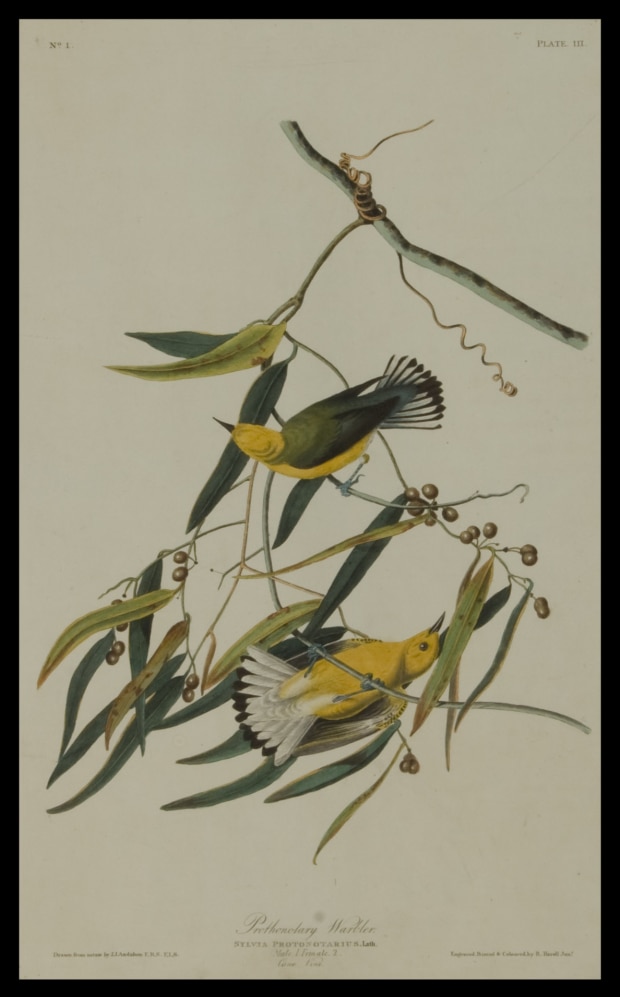 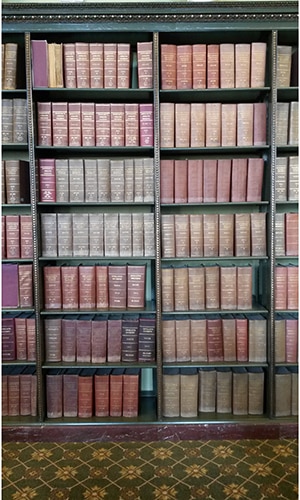 Although not technically "art," hundreds of volumes line the walls of the Main Reading Room in the numerous original metal bookcases that were restored during the Library's renovation in 2014-2015 to their original colors of olive green with bronze trimmings. As the official depository library of Massachusetts state publications, the Library holds such resources as the House and Senate Journals, Acts and Resolves, Legislative Documents, and the Massachusetts General Laws.

Busts in the State Library of Prominent Massachusetts Political Figures 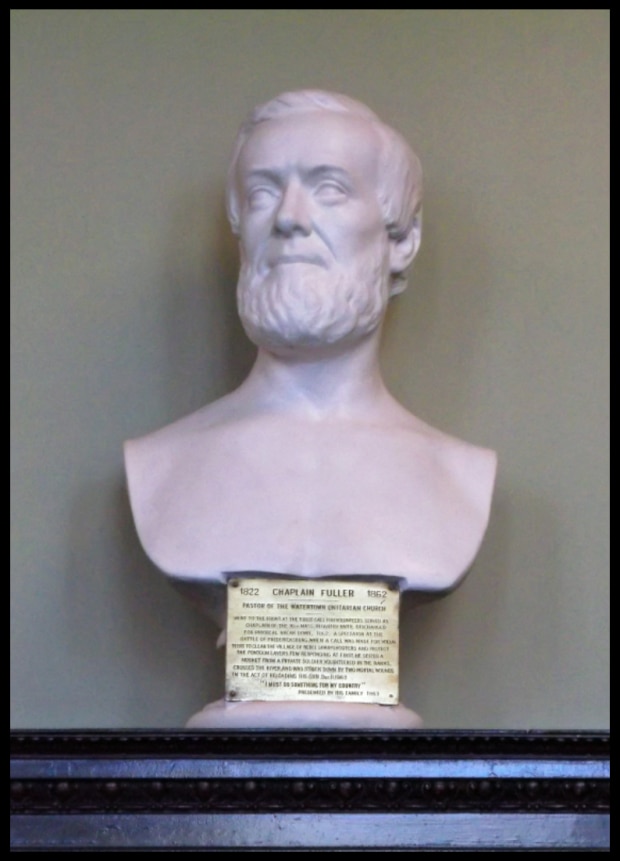 Arthur Buckminster Fuller (1822-1862) was a teacher, missionary, and clergyman. In the 1850s he served as chaplain for the Massachusetts Senate and House of Representatives, and in 1861 he was commissioned as the chaplain of the 16th Massachusetts Regiment during the Civil War. On December 11, 1862, Fuller was killed at the Battle of Fredericksburg, Virginia, after volunteering to accompany the 19th Massachusetts Regiment across the Rappahannock River. Made from plaster, this piece measures 27" x 15" x 12". and is attributed to artist George H. Bartlett, circa 1863. The bust was given the same year to the State Library by Fuller’s family. 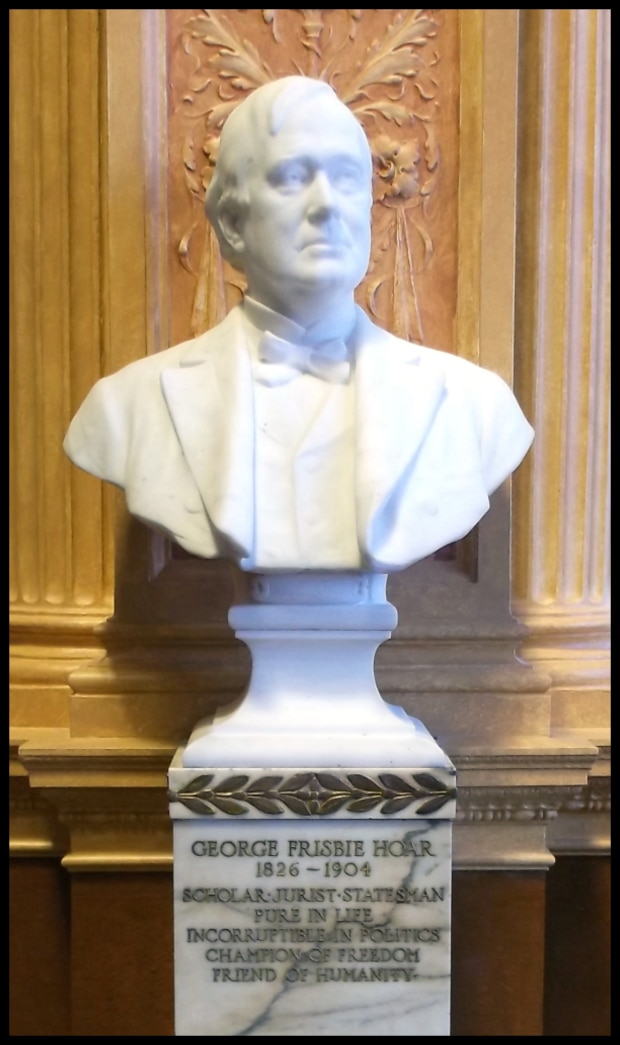 In 1908 the Commonwealth commissioned the creation of a bust depicting United States Senator George Frisbie Hoar (1825-1904) of Massachusetts. Daniel Chester French sculpted the piece from marble, which stands at 31" x 23" x 15". It is signed on the side by the artist. 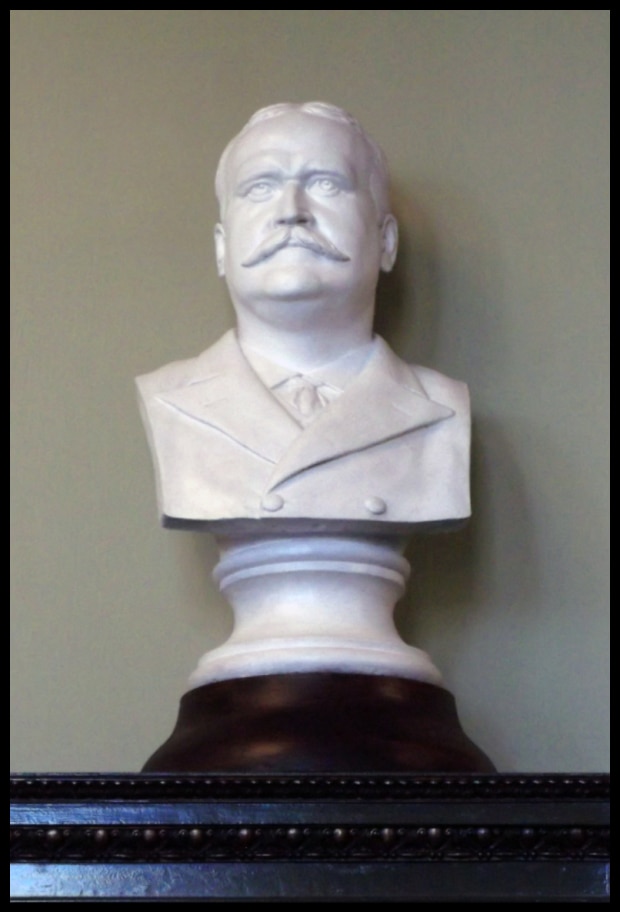 John Davis Long (1838-1915) had an impressive career serving as Massachusetts Governor, U.S. Representative, and Secretary of the Navy. Pierre Millet created the 26" x 13" x 11" bust from plaster, probably at some point between 1880 and 1894, when Millet was active in Boston. It is signed by the artist under the shoulder and was gifted to the Commonwealth by an unknown source.

More Busts in the State Library of Prominent Figures 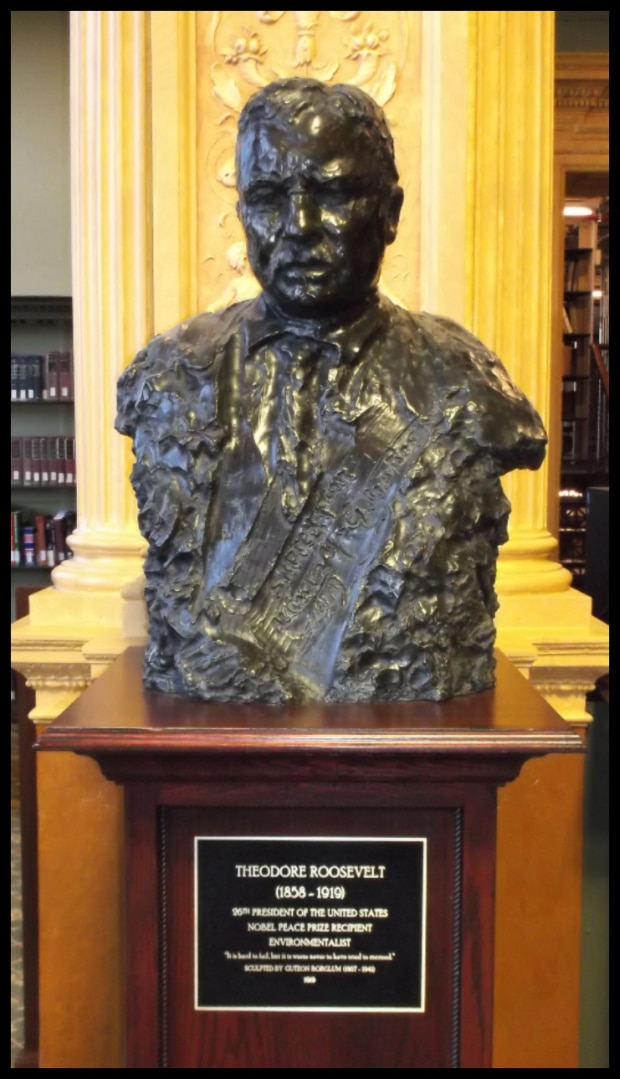 Located to the left of our main reference desk, the bronze bust of Teddy Roosevelt was sculpted in 1919 by John Gutzon Borglum (1867-1941), who also sculpted Mount Rushmore. This piece predates the start of that monumental project by eight years. The bust, which measures 31" x 23" x 16½", is signed by the artist on the front and was given to the State Library in 1945 by the Roosevelt Club of Boston. 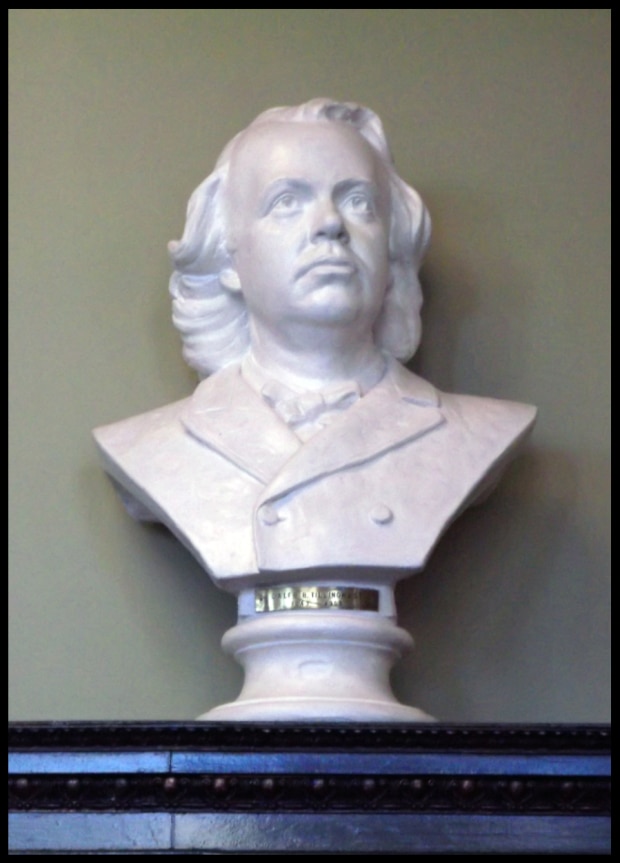 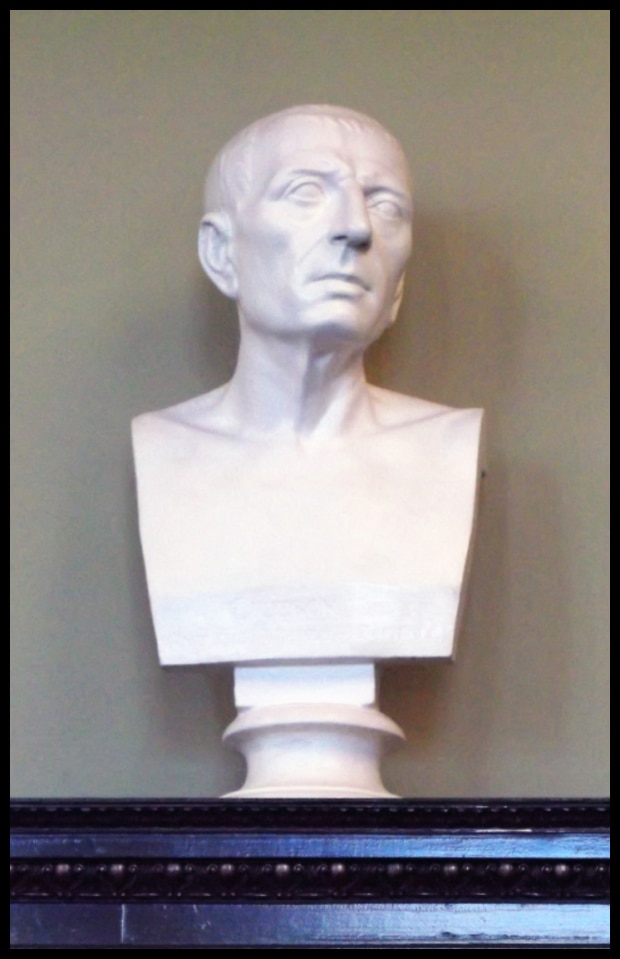 Marcus Tullius Cicero (106-43 B.C) was a Roman statesman and orator and a frequent subject of sculptors in the nineteenth century. The State Library’s plaster bust of Cicero, which measures 24½" x 12" x 10½", was created by an unknown artist and was modeled after a classical bust in the Capitoline Museum in Rome. It is inscribed, “Ciceron Buste/Antique Musee Capitole.” 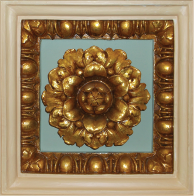 Gold toned rosettes line the interiors of the archways that frame the view to the Main Reading Room below. These rosettes were restored to their original beauty as part of the Library's 2014-2015 renovation, during which time conservators drilled cross-sections from the Library's walls to reveal the fifteen different colors of the Library's original paint scheme. 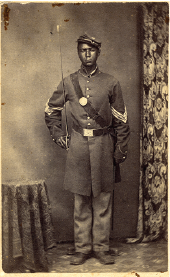 Prints of portraits of Sergeant Andrew Jackson Smith and two other unknown Civil war soldiers to the left and right of the entrance to the mezzanne balcony area are from the State Library's collection of photographs and handwritten documents from the 54th and 55th Massachusetts Volunteer Infantry Regiments. 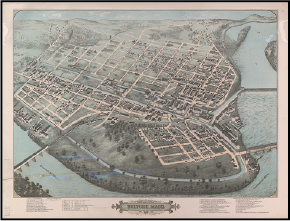 Located on the wall of the balcony are several reproductions of historic bird's-eye view maps from the Library's extensive holdings. Dating from the mid-1800s to the early 1900s, these maps provide a fascinating view into a town's past. They can also be viewed in the Library's digital repository. During the 19th and early 20th centuries, transportation systems and infrastructure emerged in Massachusetts, starting with canals, followed by the development of railroads and harbors and finally the laying out of highways. The State Library of Massachusetts digitized visual materials in its collection related to the development of transportation systems in the state during the 19th and early 20th centuries and you can view them online as well. 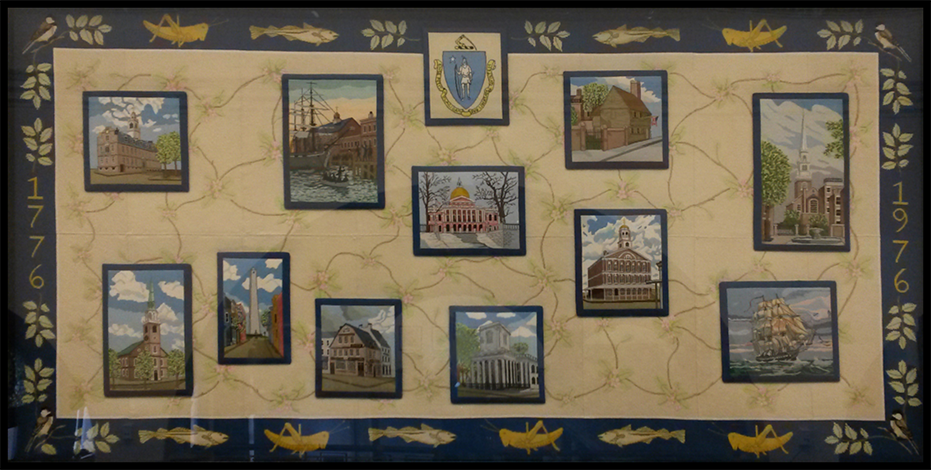 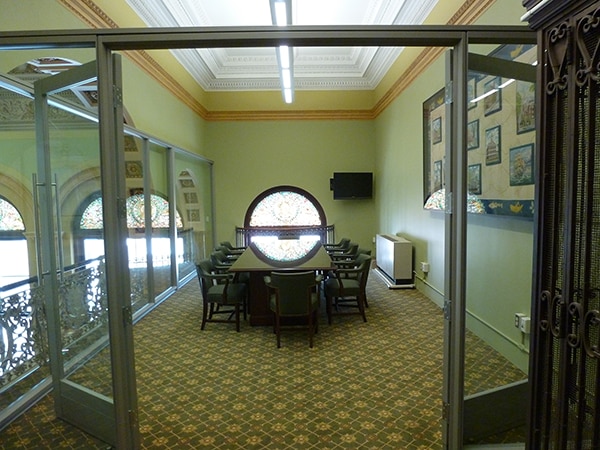 The Library renovation in 2014-2015 included the addition of an attractive and inviting Conference Room space on the mezzanine that is available to reserve for meetings.

Open file for Mission Statement, History, and Vision of the State Library