Download the digitized version of the original "Of Plimoth Plantation"

Brief Chronology of the Manuscript Volume

Introduction to the Bradford Manuscript

The original copy of Of Plimoth Plantation details the travels and everyday lives of a small group of religious Separatists, who set out from England to seek the religious freedom they felt was not available to them back home. Written by William Bradford, a Pilgrim leader in the religious Separatist movement, the book presents in manuscript format the initial authoritative account of the Mayflower voyage and the settling of what would become the first permanent settlement of Europeans in New England, using the newly-signed Mayflower Compact as the colony’s governing document.

Lost for nearly a century and often believed by many to be Bradford’s personal journal in the new land, Of Plimoth Plantation, which is also commonly known as the “Bradford Manuscript,” represents a written retrospection on his experiences and observations, initially written as two books, the second of which was never completed. It has been incorrectly called the "Log of the Mayflower;" however Bradford started writing long after the arrival of the Pilgrims and it cannot be considered an actual daily journal of the Mayflower's voyage.

The Bradford Manuscript gives historical scholars, researchers, and everyday history enthusiasts a first-hand account from the perspective of a European settler of the founding of Plimoth Plantation, or Plymouth Colony, as it is now known. The original settlers were beset by diseases and illnesses that killed nearly half of the original 100 settlers within the first six months of the expedition. They suffered as well from a scarcity of food, harsh and unforgiving weather, and conflicts with the indigenous populations in the area over land and traditions. These colonists, who were originally called “Old Comers,” persevered through their hardships, frequently aided by the area’s original inhabitants, and went on to mark a place for themselves in the annals of American history.

Although it appears Bradford never attempted to publish his manuscript, he made it clear that he wanted it preserved and read by future generations.

Description of the Bradford Manuscript Volume

The Mayflower and her Passengers

The "Mayflower Compact" was signed on November 11, 1620 onboard the Mayflower shortly after coming to anchor off Provincetown Harbor. The Pilgrims had obtained permission from English authorities to settle in Virginia, whose northern border at the time extended up to what is now New York. The Pilgrims had originally intended to settle near the mouth of the Hudson River, but due to dangerous shoals and a near shipwreck on their attempt to head south, they decided instead to settle outside the bounds of the Virginia Company patent--which caused some "mutinous speeches" amongst some of the passengers. The Mayflower Compact was an attempt to establish a temporary, legally-binding form of self-government.

Though the original no longer exists, the text was first published in Mourt's Relation in 1622. The earliest surviving handwritten copy of the text is included in Governor WIlliam Bradford's manuscript (pictured below). Bradford did not list the signers nor did he refer to the document as "Compact" or "Mayflower Compact."  Nathaniel Morton, secretary for Plymouth Colony, published it, along with the earliest known list of the signers, in his history, New England's Memorial in 1669.  A list of signers is also found in Thomas Prince's 1736 book, Chronological History of New England; and Thomas Hutchinson published a list of signers in 1767 as well. It is uncertain if they had access to the original, or were basing their list of signers off Nathaniel Morton's.

In ye name of God Amen· We whose names are vnderwriten,
the loyall subjects of our dread soueraigne Lord King James
by ye grace of God, of great Britaine, franc, & Ireland king,
defender of ye faith, &c

Haueing vndertaken, for ye glorie of God, and aduancemente
of ye christian ^faith and honour of our king & countrie, a voyage to
plant ye first colonie in ye Northerne parts of Virginia· doe
by these presents solemnly & mutualy in ye presence of God, and
one of another, couenant, & combine our selues togeather into a
ciuill body politick; for ye our better ordering, & preseruation & fur=
therance of ye ends aforesaid; and by vertue hearof, to enacte,
constitute, and frame shuch just & equall lawes, ordinances,
Acts, constitutions, & offices, from time to time, as shall be thought
most meete & conuenient for ye generall good of ye colonie:  vnto
which we promise all due submission and obedience.  In witnes
wherof we haue herevnder subscribed our names at Cap=
Codd ye ·11· of Nouember, in ye year of ye raigne of our soueraigne
Lord king James of England, france, & Ireland ye eighteenth
and of Scotland ye fiftie fourth. Ano: Dom ·1620·|

In the name of God, Amen. We whose names are under-written, the loyal subjects of our dread sovereign Lord, King James, by the grace of God, of Great Britain, France, and Ireland King, Defender of the Faith, etc.

Having undertaken, for the glory of God, and advancement of the Christian faith, and honor of our King and Country, a voyage to plant the first colony in the northern parts of Virginia, do by these presents solemnly and mutually, in the presence of God, and one of another, covenant and combine our selves together into a civil body politic, for our better ordering and preservation and furtherance of the ends aforesaid; and by virtue hereof to enact, constitute, and frame such just and equal laws, ordinances, acts, constitutions and offices, from time to time, as shall be thought most meet and convenient for the general good of the Colony, unto which we promise all due submission and obedience. In witness whereof we have hereunder subscribed our names at Cape Cod, the eleventh of November [New Style, November 21], in the year of the reign of our sovereign lord, King James, of England, France, and Ireland, the eighteenth, and of Scotland the fifty-fourth. Anno Dom. 1620. 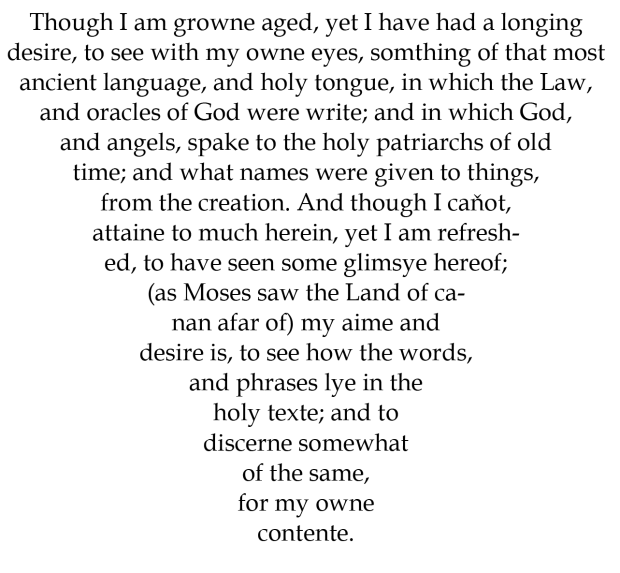 Bradford's History "of Plimoth Plantation" concludes in the year 1647 but he had still some years to live. He may have described himself as "growne aged" but that does not mean that he was not still dedicated to his own enlightenment and education. He may have slowed down in body but not in mind and spent his quiet "retirement" days in Hebrew study whose notes occupy the first pages of his manuscript.

Return of the Manuscript to the Commonwealth of Massachusetts

After a long campaign, the Bradford Manuscript was returned on Wednesday, May 26, 1897, to great ceremony in the General Court as detailed in the Journal of the House of Representatives from 1897:

At eleven o'clock A.M., pursuant to the order previously adopted, the two branches met in joint convention for the purpose of witnessing the exercises of the formal presentation to the Governor of the Commonwealth of the Bradford Manuscript History recently ordered by decree of the Consistorial and Episcopal Court of London to be returned to the Commonwealth of Massachusetts by the hands of the Honorable Thomas F. Bayard, lately ambassador at the court of St. James's.

The President of the Senate being in the chair, a committee consisting of Messrs. Roe, Woodward and Gallivan, of the Senate, and Messrs. Pierce of Milton, Bailey of Plymouth, Brown of Gloucester, Fairbank of Warren, Bailey of Newbury, Sanderson of Lynn, Whittlesey of Pittsfield and Bartlett of Boston, of the House, was appointed to wait upon His Excellency the Governor and inform him that the two branches were in convention for the purpose of witnessing the exercises of the formal presentation to him of the Bradford Manuscript History. Soon afterwards His Excellency the Governor, accompanied by His Honor the Lieutenant-Governor and the Honorable Council, and by the Honorable Thomas F. Bayard, lately ambassador of the United States at the Court of St. James's, the Honorable George F. Hoar, Senator from Massachusetts in the Congress of the United States, and other invited guests, came in. The decree of the Consistorial and Episcopal Court of London, authorizing the return of the manuscript and its delivery to the Governor of this Commonwealth, was read. The President then introduced the Honorable George F. Hoar, who addressed the convention, giving an account of the manuscript and of the many efforts that had been made to secure its return. The Honorable Thomas F. Bayard was then introduced by the President, and he formally presented the manuscript to His Excellency the Governor, who accepted it on behalf of the Commonwealth.

History in the State Library of Massachusetts

In 1898 Governor Roger Wolcott deposited the manuscript into the custody of Caleb B. Tillinghast, State Librarian, for safekeeping and it has remained in the State Library of Massachusetts ever since.

After an extensive project to repair and digitize the Manuscript at the Northeast Document Conservation Center in Andover, Massachusetts, it is now housed in a custom-made box that supports it from all sides, keeping it protected from light and dust under controlled environmental conditions. Visitors to the State Library can view a facsimile volume printed from the high resolution digital images taken after the conservation project was completed.