The STEM (Science, Technology, Engineering, Mathematics) Advisory Council is established by M.G.L. Chapter 6, Section 218 in order to expand access to high-quality STEM education for students across the Commonwealth. 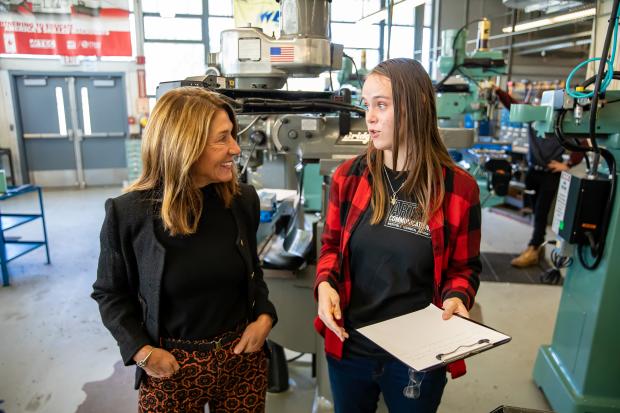 Members of the Council include individuals from academia, business, government and non-profits who believe in the necessity of a STEM-literate and skilled citizenry ready to meet the needs of a 21st Century workforce.

The Council serves as the central coordinating entity to bring together all of the participants from state agencies, the legislature, and members of the public and private sectors involved with STEM planning and programming.

The STEM Advisory Council has three priorities for STEM education in MA:

Between 2009 and 2014, the STEM Advisory Council wrote two STEM plans, which guide the Council’s work and aid STEM advocates across the Commonwealth:

Karyn Polito was inaugurated on January 8th, 2015 as the 72nd Lieutenant Governor of the Commonwealth of Massachusetts.

Elected alongside Governor Charlie Baker in November of 2014 on a platform of making Massachusetts great for everyone, Lieutenant Governor Polito continues her career in public service in the new administration.

Lieutenant Governor Polito began her public service in local government, serving as a member of the Shrewsbury Board of Selectmen. She then expanded her work to the state level, serving as a member of the State Lottery Commission. Then, in 2001, Polito ran for State Representative and won, proudly representing the residents of the 11th Worcester District (Shrewsbury and Westborough) for five terms.

In her time on Beacon Hill, Polito was a leading advocate for the passage of "Jessica's Law," a bill which would establish tough mandatory minimum sentences for child sex offenders. Her advocacy paid off in 2008, when she worked with her Democratic colleagues to pass tougher sentencing legislation and require District Attorneys to file more comprehensive reports about child sex offenses in Massachusetts.

Lieutenant Governor Polito understands the strain on local budgets, and worked relentlessly to secure increases in local aid, Chapter 70 school aid, Special Education aid, and Special Education transportation aid, as well as for local grant funding. Throughout her term in office, Polito advocated for a safer Commonwealth by filing legislation in a number of key areas: cracking down on drunk drivers, requiring defibrillators in public schools, and strengthening the experience requirements for young drivers.

Polito has also worked hard to promote jobs and economic development, especially encouraging young people to explore careers in science and technology. She served on the Robert H. Goddard Council on Science, Technology, Engineering and Mathematics Education, and she hosted the annual “Women in Science” conference in Worcester. She is a board member of the Worcester Area Regional Chamber of Commerce, and the Corridor Nine Area Chamber of Commerce.

Lieutenant Governor Polito also believes strongly in giving back to the community. Her first major legislative initiative in 2003 was to file legislation allowing for the issuance of special license plates with the Red Sox and Jimmy Fund insignias. Since that bill was passed, the Red Sox special-issued license plates have raised more than $7,000,000 to date for the Jimmy Fund of the Dana-Farber Cancer Institute and the Red Sox Foundation.

Lieutenant Governor Polito is a lifelong resident of Shrewsbury, where she owns and operates a commercial real estate development firm and lives with her husband and two young children.

Jake was born and raised in Newton, Massachusetts, the son of a surgeon and scientist. They taught him to be a lifelong learner and to give back to the community. From the moment he could read, Jake loved American history. After graduating from Harvard College, Jake joined the Marines. He commanded infantry in Afghanistan and special operations in Panama. He's now a major in the reserves. When Jake returned home to Newton, he wanted to continue service. He won election to the Newton City Council in 2015 and topped the ticket in 2019. His favorite part of being a city councilor was constituent services and communication. Jake chaired the transportation & public safety committee and was a member of the land use committee. His work at the intersections of (a) housing & racial justice, and (b) transportation & the environment earned him endorsements from Progressive Newton and environmental advocates. Jake was the first city councilor to endorse Ruthanne Fuller, the first woman to be Mayor of Newton. While serving as a city councilor on nights and weekends, Jake managed teams at both a Fortune 100 and a startup. He led product development in cybersecurity and insurance. He has degrees in economics and finance from Harvard College and MIT Sloan. Jake lives in Newtonville with his wife, Michelle; their son, Teddy; and their Labrador Retriever, Donut.

Dr. Leiden is the Chairman, President and CEO of Vertex Pharmaceuticals. He has served as a member of Vertex's board of directors since 2009. Dr. Leiden has more than 20 years of scientific, commercial and financial experience in the pharmaceutical and biotechnology industries as well as clinical and scientific experience in academia as a practicing cardiologist and molecular biologist.

Prior to joining Vertex, Dr. Leiden was a Managing Director for Clarus Ventures, a life sciences venture capital firm he joined in 2006. From 2000 to 2006, he served as President and Chief Operating Officer, and Chief Scientific Officer, at Abbott Laboratories where he had responsibility for running Abbott’s global pharmaceuticals business. While at Abbott, Dr. Leiden helped launch multiple breakthrough medicines, including Humira for rheumatoid arthritis and other autoimmune diseases and Kaletra for HIV infection, among others. He also served as a member of the Board of Directors of Abbott Laboratories and TAP from 2001 to 2006.

Dr. Leiden began his career in academia as a practicing cardiologist and molecular biologist. From 1987 to 2000, Dr. Leiden held several academic and hospital appointments, including roles as Chief of Cardiology at the University of Chicago, the Elkan R. Blout Professor of Biological Sciences at the Harvard School of Public Health and Professor of Medicine at Harvard Medical School. During his academic career, Dr. Leiden was also involved in starting several biotechnology companies including Vical and Cardiogene.