Researching the History of Amendments to the Massachusetts Constitution

Written primarily by John Adams, the Massachusetts Constitution served as the model for the United States Constitution 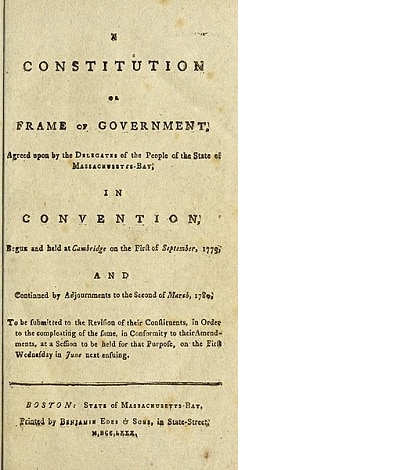 The Massachusetts Constitution, ratified by the legal voters of the Commonwealth in 1780, remains the oldest constitution currently in effect in the world. Written primarily by John Adams, it served as the model for the United States Constitution.

Naturally, many amendments have been made to the Massachusetts Constitution in order to meet the needs of an ever-changing and advancing society: these changes are referred to as the Articles of Amendment. In fact, Article XLVIII, which was adopted in 1918, now governs the amending process.

The Massachusetts General Court continues to hold constitutional conventions, and today they are synonymous with “joint sessions.” (See also Rule 23 of the Joint Rules of the Senate and House of Representatives)

When, why, and how is an Article of Amendment passed?

The State Library often receives questions from researchers interested in understanding when, why, and how an Article of Amendment was passed. These types of amendments go through a different process than amendments to the General Laws of Massachusetts, for example.

In brief, initiative petitions and legislative referrals for constitutional amendments must go through two sessions of the Massachusetts General Court and must also be supported by 25% of the legislature during each of these sessions.  If the proposed amendment receives enough legislative support, it then gets put on the next ballot for Massachusetts citizens to vote on.

Below are some common questions about Articles of Amendment and helpful suggestions on where researchers can find information.

How do I find out when an Article of Amendment passed?

I’m researching an amendment that was proposed/passed prior to 1920. Where should I look?

I’m researching an amendment that was proposed/passed after 1919. Where should I look?

I want to see how the public voted on the proposed amendment. How do I do that?

A constitutional amendment must always be adopted by the people of Massachusetts, and this is done through a ballot question. The Secretary of the Commonwealth’s Elections Division compiles election statistics and voter data in a publication popularly referred to as “PD43” (short for “Public Document 43”).

There are two ways this data can be accessed:

Where else can I find information?