Insurer Will Provide Refunds to More Than 2,100 Massachusetts Homeowners
For immediate release:

Boston — Attorney General Maura Healey announced today that QBE Insurance (QBE) will pay more than $2.4 million in refunds to more than 2,100 Massachusetts homeowners who were improperly charged for property insurance.

The AG’s Office previously reached a settlement with QBE that required the company to undergo an audit regarding force-placed insurance policies. This audit, performed by the AG’s Office, established the total amount of refunds that will be returned.

“QBE charged Massachusetts homeowners for expensive and duplicative coverage that they did not need,” said AG Healey. “This agreement will provide refunds to thousands homeowners.”

Although force-placed insurance is only intended for circumstances in which the borrower has failed to adequately insure the mortgaged property, the Attorney General’s audit of QBE found more than 2,100 of cases of duplicative insurance coverage for Massachusetts homeowners. Borrowers eligible for settlement money were previously required by their mortgage servicer to purchase force-placed insurance from QBE or were overcharged for force-placed insurance because they were mistakenly sold commercial policies rather than less expensive residential policies. The average settlement payment for affected homeowners is approximately $1,100. QBE cooperated fully with the audit, which covered policies from 2008 through 2015. 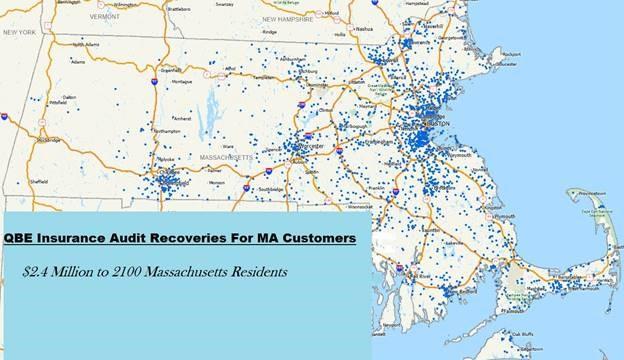 Thanks, your message has been sent to Office of Attorney General Maura Healey!