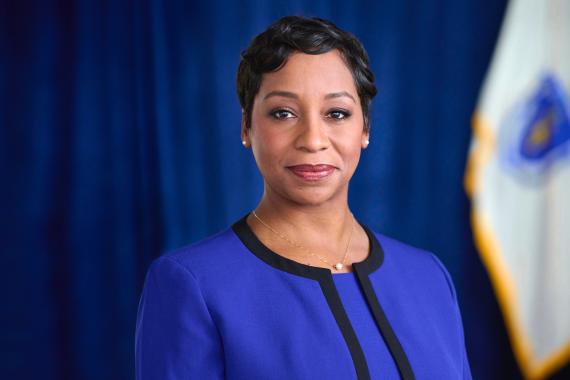 On January 18, 2023, Andrea Joy Campbell was sworn in to be the 45th Attorney General of the Commonwealth of Massachusetts, pledging to build economic prosperity and stability for all residents, prioritize the mental health and well-being of children, stop cycles of incarceration and violence and ensure the people across the state have access to the AG's Office regardless of their zip code, language or ability.

Growing up in Roxbury, Andrea’s life was filled with instability. When Andrea was eight months old, she lost her mother to a car accident while going to visit her father in prison. She and her brothers bounced around – living with relatives and sometimes in foster care – until her father got out of prison when she was eight years old, and she met him for the first time.

Andrea and her family relied on public housing and food assistance while her grandmother struggled with alcoholism. Her two brothers sadly cycled in and out of the prison system. She lost her twin brother Andre, when he passed away while in the custody of the Department of Corrections as a pre-trial detainee.

Through all of this, Andrea persevered. Thanks to loving relatives, community support and a network of teachers who encouraged her, she turned pain into purpose. She graduated from Boston Latin School and then worked her way through college with the help of grants and student loans, graduating from Princeton University and UCLA Law School.

After earning her law degree, she worked as a legal services attorney for the EdLaw project, defending the rights of children and their families — particularly those with disabilities.

Andrea also practiced law at Proskauer LLP as an employment attorney, and ultimately left to serve the public as General Counsel at the Metropolitan Area Planning Commission, working across 101 cities and towns to address regional challenges like health care access, transportation, affordable housing, and climate change.

Andrea served as legal counsel to Governor Deval Patrick, working to improve our education and transportation systems and move forward an agenda of equity across the state.

In 2015, Andrea successfully ran for the Boston City Council becoming the first woman to represent District 4 on the Council. Her first piece of legislation was the Community Preservation Act, which still generates over $20 million annually for new affordable housing, historical preservation, and parks and open space. In 2018, she was unanimously elected City Council President – the first Black woman to hold the title.

Office of the Attorney General

The Attorney General is the chief lawyer and law enforcement officer of the Commonwealth of Massachusetts.
More Information