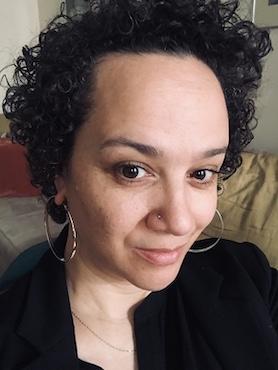 bethany m. allen (she/her) is a writer, educator, and racial and gender equity facilitator living in Roxbury, MA, whose work aims to create radical, deep connections within and across communities to promote healing and transformational social change. She currently serves as the Director of Equitable Pathways in the Office of Strategy and Innovation for the Boston Public Schools’ Division of Equity, Strategy & Opportunity Gaps, and she is the former Boston Program Director at Peer Health Exchange, a national organization that delivers skill-based mental health, sexual health, and substance use education programs in communities that experience health disparities. In a previous role as the first Statewide Initiatives Director for the Boston Alliance of GLBT Youth (BAGLY), one of the nation’s oldest and largest LGBTQ youth organizations, she co-authored two daylong training institutes on the brave space facilitation model for Creating Change, the nation’s largest LGBTQ conference (Brave Space and Beyond: Navigating Anti-Oppression Dialog in LGBTQ Youth Spaces, 2018; Brave Space: Queering Safety in LGBTQ Youth Spaces, 2017) and coordinated the annual Massachusetts Youth Pride festival. She also co-authored the facilitation guide for The Harvest: Brown v. Board, North & South, a statewide community engagement initiative sponsored by Mass Humanities examining the history and consequences of our nation’s efforts to desegregate its public schools. She is a member of the Board of Trustees for the American Repertory Theater (A.R.T.) in Cambridge; prior to joining the Board, she worked as a facilitator/moderator on several productions (The White Card, 2018; The Bitter Game, 2017; Trans Scripts, Part I: The Women, 2017; Notes from the Field: Doing Time in Education, 2016). Most recently, she contributed to the development of A.R.T.'s highly acclaimed Jagged Little Pill, which saw its Broadway premiere in November 2019 and earned 15 Tony Award nominations in 2020. She is currently a Vice Chair of the Massachusetts Commission on LGBTQ Youth and independently organizing a steering committee for a new organization, the Queer and Trans Coalition for Racial and Gender Equity (or QTCRGE, pronounced “QT courage”). While its vision is evolving, QTCRGE seeks to disrupt systems of oppression through a novel approach to coalition building rooted in Black feminist theory. She grew up in Maine and later raised three children (who are now young adults) while attending Harvard, experiences she often wrote about in a biweekly column for Africana.com from 2000-2005, Brown Eyed Girl.