The Importance of STEM Education

Investments in science, technology, engineering, and mathematics education is vital for the success of our students and our economy. 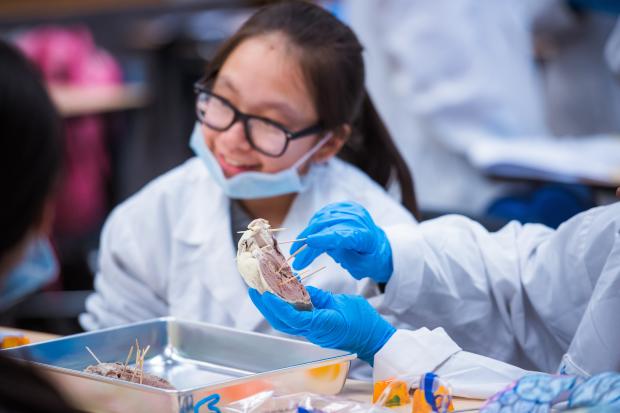 Strengthening STEM education in the Commonwealth’s K-12 schools is a priority of the Baker-Polito Administration.

Despite the abundance of jobs in science, technology, engineering and math, just one in six American high school seniors say they are interested in studying STEM in college.

The need for STEM graduates particularly impacts Massachusetts because more than 40 percent of all employment in the Commonwealth revolves around innovation industries such as clean energy, information technology, defense and advanced manufacturing, according to the Massachusetts’ Plan for Excellence in STEM Education.

Women are particularly underrepresented in STEM fields. Although women account for about 47 percent of the workforce in the United States, they hold only 25 percent of computer and mathematical occupations, and just 15 percent of engineering jobs.

STEM in Massachusetts: STEM workers represent 17% of the total Massachusetts workforce—over 600,000 of a total 3.6 million workers—about one-third higher than the U.S. average of about 13%. Adjusted for population, Massachusetts has more demand for STEM jobs than almost every other state.

Higher paying with entry-level opportunities: Entry-level wages for STEM careers are twice that for all Massachusetts occupations, and 1 out of 5 STEM jobs only require a postsecondary certificate or associate’s degree.

In demand in growing: High-demand STEM occupations in Massachusetts can take as long as 70 days to fill, and the number of those jobs are projected to grow faster than the overall number of jobs in the Commonwealth.

Gender representation: Gender representation in Massachusetts STEM jobs is just about equal (49.5% women, 50.5% men), but this masks large differences within the four occupational categories. Women hold 77% of health care practitioner & technician jobs, but only 26% of computer & mathematical jobs and 15% of architecture & engineering jobs. Fewer women are receiving engineering or computing degrees and then fewer are pursuing computing jobs after attaining such a degree.

Race and ethnicity representation: Overall 76% of STEM workers are white, close to the overall Massachusetts job average of 77%, but like the data around gender, this again masks other differences. Hispanic/Latinx are underrepresented in all STEM occupations, black/African Americans are underrepresented in non-health care occupations, and Asians are overrepresented in the non-health care occupations.As with women, looking at specific STEM degree majors, the overall picture for black/African Americans and Hispanic/Latinx workers is that they tend to have smaller shares of STEM-related degrees and even when they have such degrees, they are less likely to have related STEM jobs.