Guide to Genealogical Resources in the State Library

Find out how the State Library's collections can help you with your genealogical research.

This collection covers most Massachusetts communities and dates from the first Boston directory of 1789 through the last Boston directory published in 1981. Directories contain a list of persons, organized by last name, residing in a town or city. However, some directories do have house guides, which contain listings by address and not by individual. Many contain lists of businesses grouped by type as well as advertisements.

These publications provide details of transactions recorded by town officials. Some towns published the names in recorded births, marriages, and deaths, though some recorded only the statistics of these events. Some reports contain jury lists and taxpayer lists and assessments.

These can help identify residents and land owners during the 17th, 18th and 19th centuries. Valuations lists are particularly useful because they provide a very detailed picture of the property holdings and personal wealth of an individual. Aggregates, or summaries, of valuation data are part of this collection. Lists for Maine are also part of the collection.

Compiled and published in the early 20th century for many municipalities in Massachusetts, these volumes include birth, marriage, and death information transcribed from town and church records, cemeteries, and private sources.

The Library’s collection includes some early probate records for Barnstable, Bristol, Essex, Middlesex, and Plymouth counties, as well as some index volumes for Middlesex (1648-1870), Suffolk (1636-1922), and Worcester (1731-1904) counties. See the Library's online catalog for specific holdings.

The State Library has a large selection of historic newspapers covering the 18th, 19th, and 20th centuries which primarily focuses on newspapers from Massachusetts.

The State Library's collection has many histories of the Commonwealth, including regimental histories and official reports by the Adjutant General of Military Personnel. These include Massachusetts Soldiers and Sailors of the Revolutionary War and Massachusetts Soldiers, Sailors, and Marines in the Civil War, and other series, including a collection of digitized photographs of World War I soldiers from the 101st Field Artillery, 101st Engineers, 102nd Field Artillery, and the 104th Infantry of the 26th (Yankee) Division.

The Library has a historical collection of published family histories. For specific holdings please refer to the online catalog.

The file cards list basic information, such as years of service, political party (when available), education, occupation, birth and death dates, and other relevant information for all members of the Massachusetts General Court and Constitutional offices from 1780 to the present. [on-site at the State Library]

The Library’s collection includes some histories of academic institutions such as Harvard College and Boston University, as well as publications of the Massachusetts Historical Society, the Bostonian Society, and some of the local historical societies. For specific holdings please refer to the online catalog.

In 1892 the Massachusetts legislature passed "An Act to Authorize the Preparation for the State Library of an Index of Current Events" (St. 1892, c.140). Commonly called the "Zimmer Index", it was intended to be a card index to "current events" which would be of use to Massachusetts legislators and to the public.

The main index generally covers the years 1878-1937, although there are selected entries for earlier and later dates. Entries include obituaries, coverage of political events, speeches, dedications, visits of foreign dignitaries and general news events. The Boston Globe, Boston Herald, Boston Journal, and Boston Transcript were indexed most consistently, although there are entries for other newspapers as well. A later index, covering the years 1960 to 1983, includes articles from the Boston Globe and Boston Herald which are primarily political or governmental in nature. 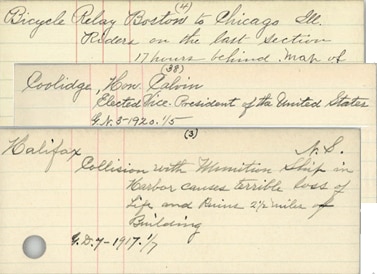 An example of the handwritten cards in the "Zimmer Index"

Outside Resources for Genealogical Research

Official repository for all Massachusetts birth, marriage and death records from 1921 to the present.

The Massachusetts Archives is the repository for Massachusetts vital records (births, marriages and deaths) for the period between 1841 and 1920. A guide to their genealogical resources is available on their website.

A comprehensive collection of governmental records, city and town directories, New England newspapers, family and town histories, and more. A guide to their genealogical resources is available on their website.

Repository of federal records, including population censuses for all states, passenger arrival records for Boston and other New England ports, New England naturalization records, and more resources for genealogy research.