The Civil War Soldiers and Sailors System is a database provided by the National Park Service containing information about the men who served in the Union and Confederate armies during the Civil War. Other information on the site includes histories of Union and Confederate regiments, links to descriptions of significant battles, and selected lists of prisoner-of-war records and cemetery records.

Massachusetts Soldiers, Sailors & Marines of the Revolutionary and Civil Wars

Massachusetts Soldiers and Sailors of the Revolutionary War: a Compilation from the Archives [1896]

Massachusetts Soldiers, Sailors, and Marines in the Civil War [1931]

This resource, provided by the National Archives, includes a variety of military documents that cover conflicts from the Revolutionary through the Vietnam Wars.

This online collection contains nearly 8500 images of New England WWI soldiers, primarily from the 26th “Yankee” Division. This collection was originally donated to the State Library in 1935 by the Boston Globe, and many photographs include biographical and military information. 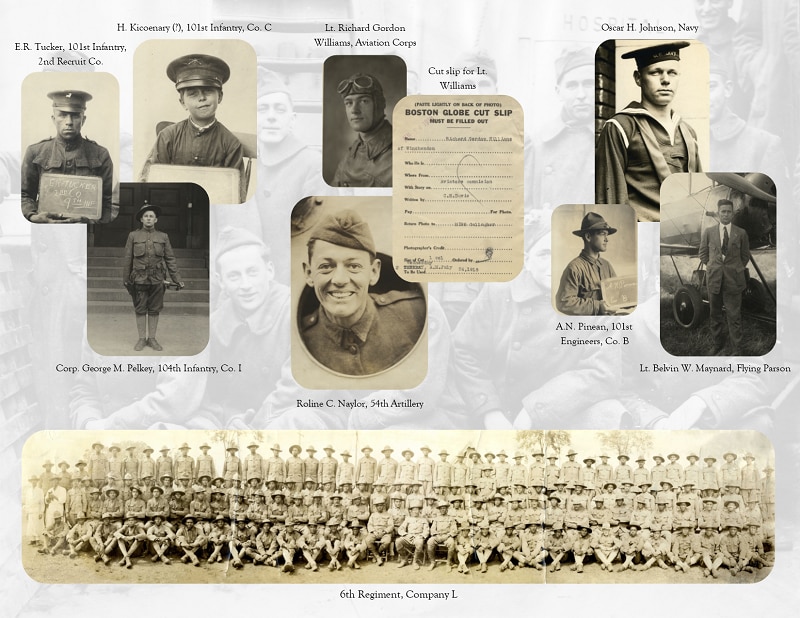 A compiled list of online resources for those wanting to access Massachusetts military documents and published histories, from 1620-1972. This list contains links to both free and subscription databases.

Fold3, part of Ancestry.com, contains military records, stories, photos, and personal documents from soldiers of the Revolutionary War up through recent conflicts. The site also includes non-military and international records. [Subscription to Fold3 required for access]

The BPL also has a large collection of newspapers on microfilm if you can’t find what you need online.

Resources Available in the State Library

Contains over 40,000 index cards with various pieces of biographical and service information on New England WWI soldiers. Some cards include newspaper clippings, such as obituaries.

The Hartwell collection contains numerous photographs of soldiers of the 44th & 55th regiments of the Massachusetts Infantry during the Civil War.  Also includes a roster of the 44th Regiment. The finding aid to this collection is available online.

The State Library’s collections contain many published local and general military histories, especially on the Civil War and WWI. Check out the library’s online catalog for more information.

The State Library also has some archival collections that may not yet be included in the online catalog. If you have any questions about our archival holdings and how they can help you with your research, please contact our Special Collections Department at special.collections@mass.gov

Houses the historical military records of the Massachusetts Adjutant General. This collection is one of the most complete state records of MA servicemen and women from 1775-1940.

Military records prior to 1940 are maintained by the Massachusetts Archives

Various military records from the Revolutionary through the Civil Wars, including military service records and pension files

Your Local Government or Cultural Institutions

Sons and Daughters of the American Revolution