Hunting deer during the rut

Hunting during the rut can be an exciting time. In Massachusetts, peak rut activity takes place between November 6 and November 20 each year. Use the information below to learn more about how you can take advantage of the distinct behaviors of bucks and does during the rut.
Skip table of contents

What is the rut and when is it?

Rut is a term used to describe the behavior of deer during the breeding season when males pursue females that are in estrous and ready to breed. The rut can range from several months in southern states like Florida to a short window of time in the fall in the Northeast. This an important time for many hunters because bucks become more active during daylight hours while pursuing does and are less cautious than usual. This behavior can increase the odds of a hunter harvesting a buck, or even a doe that has been moved from her bedding spot by a buck.

A favorite topic of discussion among hunters is the timing of the rut, but no matter how windy, rainy, hot or cold, the peak of breeding is more predictable than people think. Each fall, breeding occurs around the same time and is not affected by temperatures, rain, snow, moon phase, nor by any other variable. The timing of the rut is related to the period of daylight. As the season progresses and the amount of daylight decreases, hormones in both bucks and does elevate and create the urge to breed. In Massachusetts, the peak breeding period is between November 6 and November 20. This timing ensures that all fawns will be born at an optimal time in spring that will increase their chances of survival. 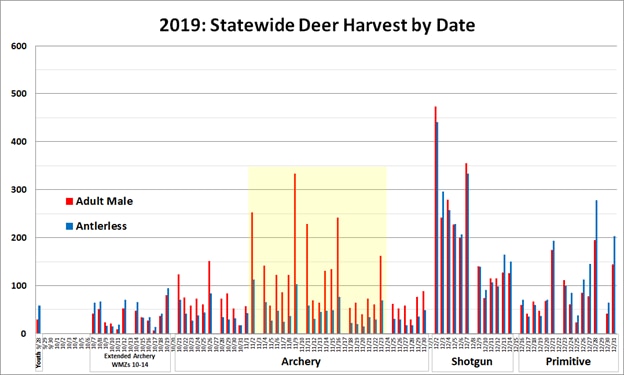 Total harvest by day separated by antlered versus antlerless. The box in yellow is the period of the rut, which you can see the antlered component dramatically increases as bucks become more susceptible to harvest during that time. Please note that the total harvest on a particular day is heavily influenced by hunter effort and how many hunters are out on any given day.

Each phase of the rut causes predictable behavior in deer—especially in bucks.

Pre-rut begins in late September and continues into October. During this time, maternal groups of deer consisting of does with offspring concentrate on feeding to increase their fat supplies for the winter and the demands of future pregnancy. Bucks are also focused on building fat supplies to prepare for the physical exertion of the rut, but they are also limiting their daytime movement during this time. 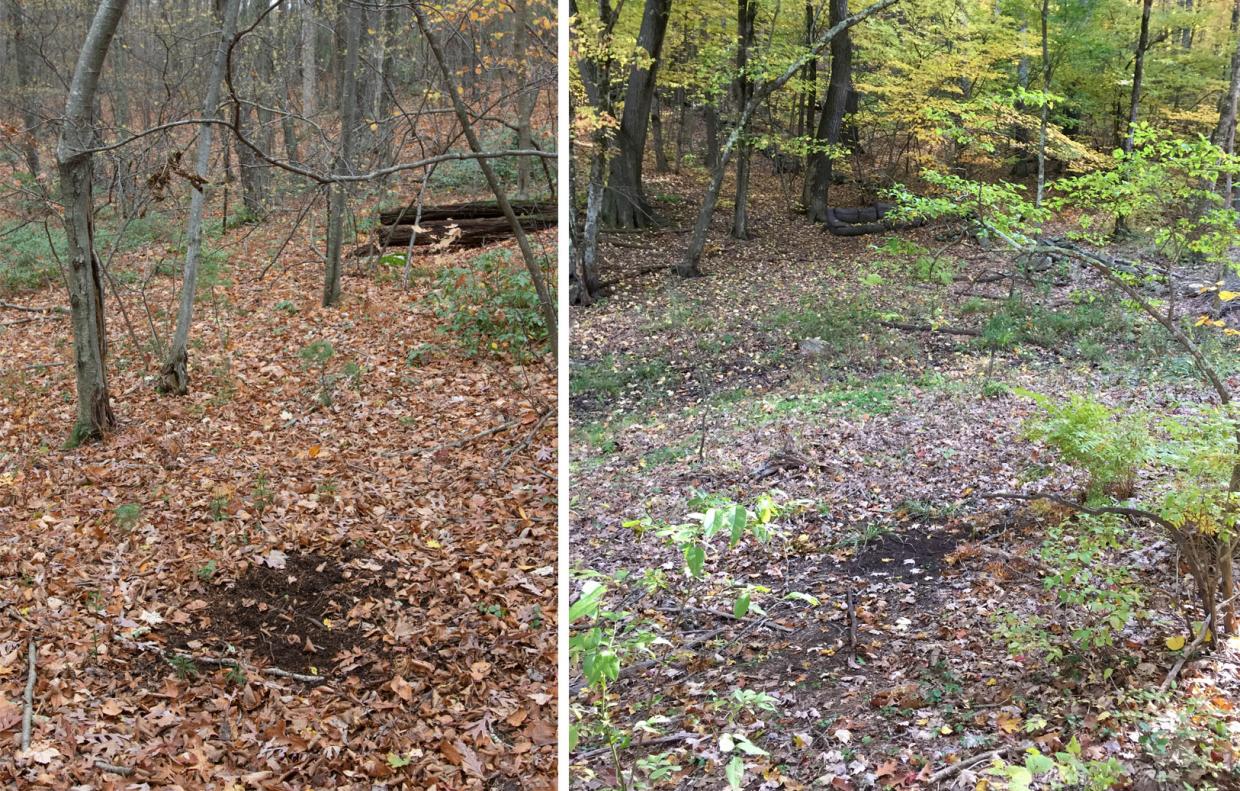 Both scrapes and rubs are often found in a line along a swamp edge, on a ridgetop, on field edges, along stone walls, or on routes to and from food sources. While bucks tend to have a home range of about 1–3 square miles, they spend most of their time in a smaller core area that can be less than 400 acres. These core areas may be heavily marked with rubs and scrapes, especially with more mature bucks. Targeting these core areas and focusing on the locations between bedding areas and food resources can be very rewarding for hunters looking to find a mature buck. However, this can be difficult because during the pre-rut many bucks limit their daytime activity.

Deer are most active close to dusk and dawn. But during the rut, deer often abandon their habit of bedding down during the day and move around more in search of a mate. Deer are also more distracted and less cautious during this time. This is also the cause of the seasonal spike in deer-vehicle collisions.

Bucks spend a lot of time chasing or harassing does, which means that deer of either sex are often on the move during daylight hours. A buck will sometimes chase a doe for hours and even days leading up to the time she is ready to breed. Some bucks can lose up to 20% of their body weight over the course of the breeding season as they are so focused on breeding that they spend little time eating. During the peak rut, some bucks may only sleep a few hours and can cover many miles in a single day.

During the rut, bucks can be found ‘cruising’ from one food source or bedding area to another and scent checking scrapes to see if a nearby doe is in estrous. The best advice for hunters looking for a buck during this time is to find the does. Look for does near bedding spots, at food sources, and on trails in between. When a buck chases a doe from a bedding area, the pair will likely move on well-traveled trails. If you see a doe being chased, stay close to the trail and wait. Often more bucks will be hot on the trail and the doe may circle back.

As the rut begins to taper off, both males and females start to focus more on food. It’s especially important for bucks to regain their weight after their exertion during the rut. Bucks start to decrease their daytime activity once more. During this time, males are still interested in breeding if the opportunity presents itself.

When hunting just after the rut, focus on food sources at dawn and dusk similar to the pre-rut. The best tip for hunters during this time, which can overlap with shotgun season, is to walk and get deer up and moving from bedding areas. Some of the most successful hunters work together in small groups. The human activity gets deer up and moving when they may otherwise have stayed bedded until after shooting hours. You may also try setting up in the woods near a good food source and hoping for movement near dawn or dusk. For a better chance of finding deer moving during shooting hours, you may venture further into the woods to be closer to bedding areas.

Where to hunt during the rut

The best places to harvest deer of either sex during the rut are pinch-points and funnels. Imagine two big beaver ponds with a small strip of land in between them with forested land on either side. Deer cover a lot of ground during the rut, so finding these small pinch points that will funnel deer into a small area as they cross from one woodlot to another can be rewarding. You can search for funnels and pinch points using satellite imagery on Google Earth, Google Maps, or MassWildlife Lands Viewer. Since deer are active throughout the day during the rut, you can hunt at a funnel or pinch-point all day long. Don’t be surprised to witness deer moving through these areas at high noon. 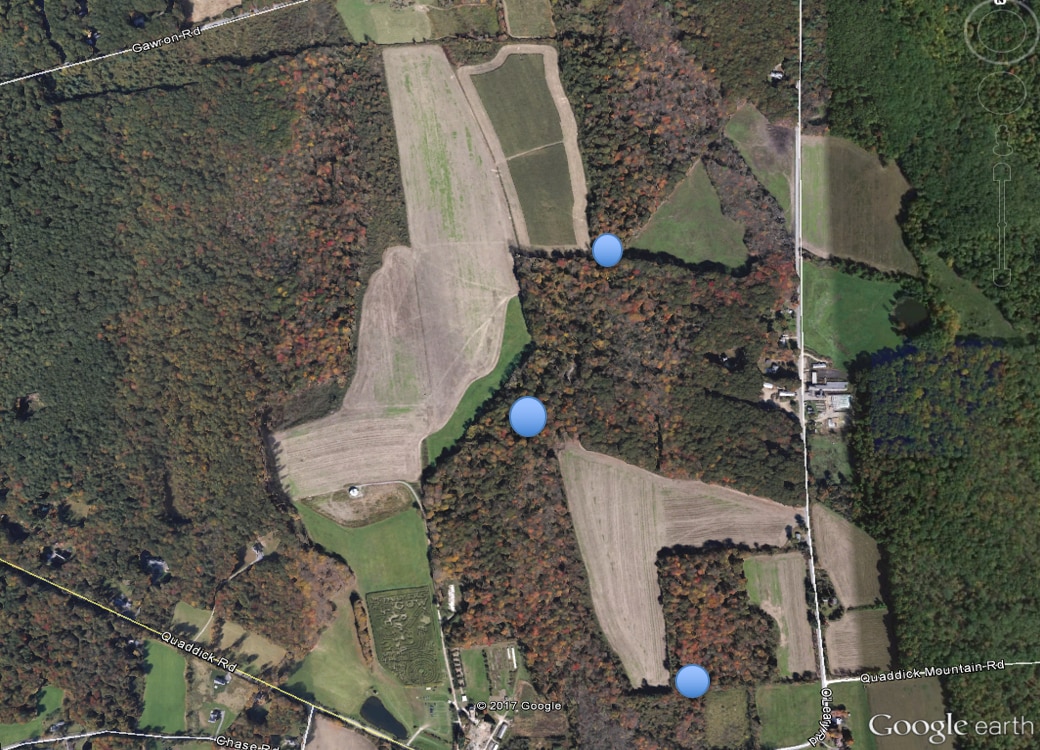 The blue dots on this Google Earth image shows funnels where deer are likely to travel often.

Using calls and scents during the rut

Note about calls: Deer can pinpoint the location of a call and often respond by coming directly toward you on high alert. This reaction can make an ethical broadside shot more difficult. It can also make it extremely difficult draw your bow without being seen. Rattling antlers, grunting, and other deer calls can also attract other hunters. Be sure to identify your target.

Deer scents can be useful when hunting the rut but they can also backfire.

During the rut, hunters often use a “doe in heat” scent. A buck’s drive to breed can lead them to make poor decisions and come running to investigate the scent of a possible mate. The use of scents may also hinder deer from coming into your range.  The new scent of an unrecognized deer can cause other does in the area to steer clear of your area. Alarmed deer can also leave a scent that can alert other animals in the area of potential danger that can linger for hours.

Note: Due to the risk of introducing Chronic Wasting Disease to Massachusetts, MassWildlife recommends using only synthetic deer urine.