Massachusetts’ African American Legislators from 1867 to the Present: Remembering the Past to Build on the Future

A summary of the history of African American state legislators in Massachusetts, highlighting some of these trailblazers, and exploring the State Library's resources and collections on African American history
Skip table of contents

The story of African American legislators on Beacon Hill is largely the story of Boston and its environment--of the 47 Black legislators elected between 1866 and 2007, only 11 were from districts outside of the Boston city limits, and of these 11, most were from Boston suburbs. In point of fact, a large percentage of African Americans living in Boston resided on the north slope of Beacon Hill during the Reconstruction period (1865-1877).

History of the First African American Legislators in Massachusetts

Walker was elected in a district that had only three Black voters, while Mitchell's district was the wealthiest ward in the state and had a large number of Black voters. Both men served concurrent one-year terms in the General Court.

Shortly after, John James Smith served in the House of Representatives in 1868, 1869, and 1872, making him the first Black legislator to be elected to more than one term in Massachusetts. While these men paved the way to help other African Americans get elected, they faced many obstacles.

During the post-Reconstruction era white legislators throughout the United States undertook steps to reduce the rights of African Americans. Likewise, the United States Supreme Court decided in Plessy versus Ferguson (1896) that “separate but equal” facilities were not unconstitutional, thus giving legal sanction to Jim Crow segregation laws.

From 1902 until 1947, there was no African American representation in the General Court due to gerrymandering, demographic shifts, and racism.  During this time the African American community had strong community leaders that advocated for voter registration, jobs, housing, and political participation for Blacks when there were no elected African American officials in the state.

After a 45 year gap in representation, Laurence H. Banks was elected to serve in the Massachusetts House of Representatives in 1947. Sources show that his political activism started much earlier in his career and his intellect and determination helped him fight for the right to be in office. In the mid-1900s African American legislators and activists worked to bring racial inequity to the forefront in Massachusetts, targeting specific issues like busing, education inequality, redlining, and labor laws that protected domestic workers, many of whom were immigrants or people of color. Throughout the 1960s and 1970s, more African Americans ran for public office and served in the Massachusetts Legislature. 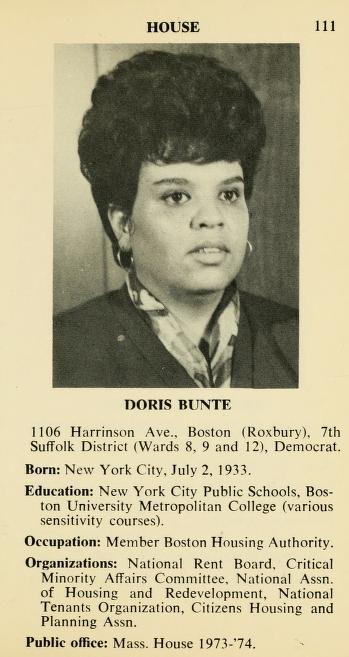 While in office, Representative Bunte helped form the Massachusetts Black Legislative Caucus (MBLC) and the Massachusetts Caucus of Women Legislators. After spending 12 years as a representative, Doris left the legislature to become the first African American director of the Boston Housing Authority, where she spearheaded efforts to integrate public housing in Boston.

The MBLC took the lessons of history and developed a power base which would make the political and legislative process accountable and accessible to the Black community. Their priority legislation included employment opportunities, Affirmative Action programs, housing, human services, and economic development in the inner cities of Massachusetts. In 2009 the MBLC changed its name to the Massachusetts Black and Latino Legislative Caucus and continues to highlight and analyze those issues and concerns affecting all people of color in the Commonwealth of Massachusetts. 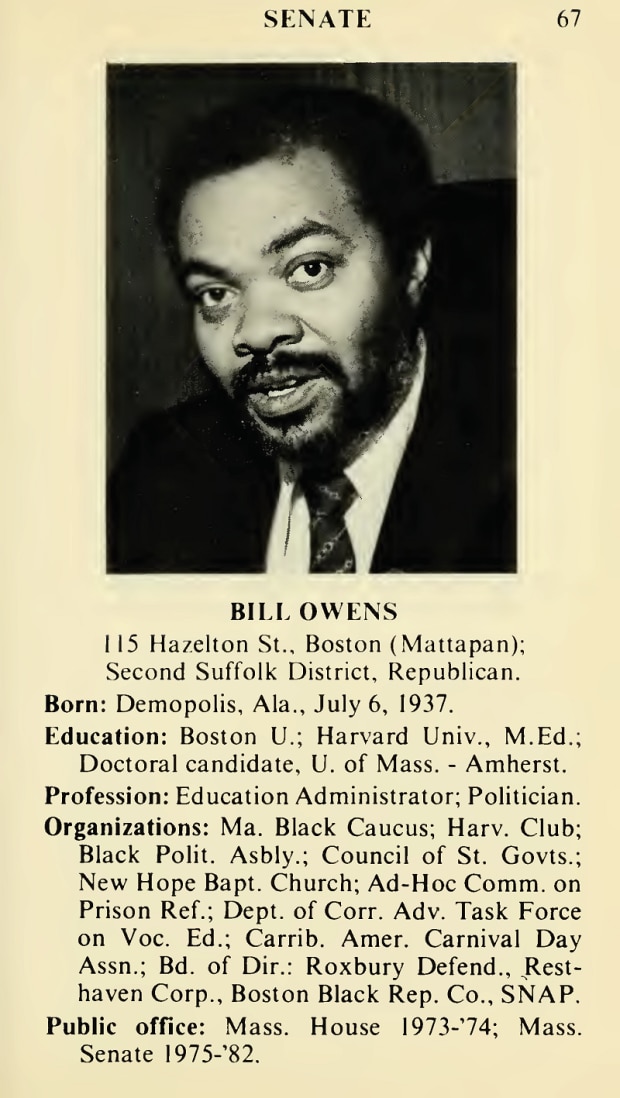 In 1975 another early member of the Black caucus, Bill Owens, was the first African American man elected to the Massachusetts Senate. Senator Owens’s achievements include the creation of the State Office of Minority Business Assistance, Summer Youth Jobs Program, securement of the appropriation for construction of Roxbury Community College, and passage of the Assault Weapons Ban.

While the history of Black legislators in the Commonwealth continues to evolve, there is simply not enough room on this web page to highlight each official and their remarkable stories and achievements, so we hope that this web page offers a portal into the history of African Americans on Beacon Hill with the help of the State Library’s resources.

The State Library’s Special Collections department has various collections relating to the history of African Americans in Massachusetts.  This department contains newspapers, manuscripts, city directories, photographs and other materials that are very helpful to researchers. For more information, please contact special.collections@mass.gov. As time moves forward and as we identify more holdings that are relevant, they will be added to this page.

Treasure of the State Library for February 2011- April 22, 1965 Address by the Reverend Martin Luther King, Jr. to the General Court