This page, Five MassWildlife staff recognized for assisting with western wildfires, is offered by
News

Interagency wildfire crews from the Northeast joined together to battle western blazes this summer. The crews returned safely with new skills to use on the job back home.

This summer, five members of MassWildlife’s prescribed fire crew joined other wildland firefighters from across Massachusetts and the Northeast to battle wildfires in Minnesota, Montana, Idaho, and California. Interagency cooperation is key to quick wildfire response and successful containment of wildfires, especially during a busy wildfire season where resources are stretched to the limit. Aaron Best and Connor Fleming of MassWildlife’s Southeast District, Chris Connors of MassWildlife’s Connecticut Valley District, Dan Bove of MassWildlife’s Natural Heritage and Endangered Species Program, and Ben Mazzei of MassWildlife’s Habitat Program served on three respective interagency assignments. We appreciate their willingness to serve working long hours away from family and friends. Caren Caljouw, MassWildlife’s Prescribed Fire Program Manager, reports, “This work provides a great service within the beleaguered communities affected by the fires. It’s also an opportunity for our staff to work within different fuel types, learn new skills on the fireline, and work closely with different agencies and organizations at a variety of levels. This experience helps staff build strong communication and technical skills which are directly transferrable to our prescribed fire program back home.”

As of October 4, the National Interagency Fire Center’s situation report listed a total of 46,518 wildfires across the country that have burned nearly 6 million acres. There are still 52 active large fires nationally and the west coast is on the cusp of the fall fire season. We are seeing a trend where fire seasons start sooner, end later, and are more severe. The smoke impacts from these fires have been widespread across the western U.S. and Canada and have on occasion been observed here on the east coast.

Aaron Best, Connor Fleming, and Dan Bove went on assignment in August with the Massachusetts Wildfire Crew (MAS#1)—an interagency Type 2 IA hand crew led by Mass DCR crew boss, Roy Liard and composed of individuals from Mass DCR, MassWildlife, and Massachusetts Municipal Firefighters. This 20-person crew was assigned to wildfires in Montana and Idaho and worked on three separate fires, spending 14 days on the fireline. MAS#1 worked on the Richard Spring Fire and the Pine Grove Fire in Montana and the Trestle Creek Fire in the Idaho Panhandle. They completed miles of patrol and mop-up to help bring these fires to a close, worked remote uncontained fire perimeter in rugged terrain, and coordinated with heavy equipment and helicopter bucket drops to complete objectives for wildfire containment. “It was a great experience to go out to Montana and Idaho to fight fire and learn new skills. A cooperative effort of states helping other states is what makes the U.S. a special place to live—I can't wait to offer my service again,” said Connor Fleming.

Dan Bove adds, “While the terrain and natural communities are very different from Massachusetts, we learn so much from these experiences and bring home skills to aid in our prescribed and wild fire events.”

Chris Connors was assigned in late August to a suppression module called New England Module #4 led by Tony Davis, a retired National Park Service zone fire management officer. Staff from the US Fish and Wildlife Service, Department of Interior, Bureau of Indian Affairs, and state agency staff from Massachusetts and New York worked together on this 9-person crew. NE Module #4 worked in a remote region of Minnesota west of Lake Superior on the John Eck and Greenwood Fires. They conducted fuel reduction around important structures and valuable areas at risk in the Boundary Water Canoe Area Wilderness. Then patrolled and scouted the head of the Greenwood Fire looking for and suppressing hot spots. They cut miles of saw line through boreal swamp and forest to establish a patrol trail around hot spots and the advancing fingers of the wildfire.

Chris Connors reports, “Being assigned with NE#4 gave me the opportunity to develop fireline leadership skills that can only be gained on an assignment like this working with multiple agencies at different levels of command to achieve common goals. While the terrain was challenging, we used GIS mapping tools merged with infra-red flight data to ground truth hot spots on the leading edge of the fire, establish priorities with incident command, and effectively secure sensitive areas.”

Ben Mazzei and Dan Bove returned home just a week ago with the Noreast #1 Interagency Type 2 Hand Crew having worked on the Dixie Fire in Northeastern California. The crew was led by David Crary, Jr., fire management officer with the National Park Service’s Cape Cod National Seashore. This 20-person crew was made up of staff from the National Park Service, US Fish and Wildlife Service, and Bureau of Indian Affairs from Maine, Massachusetts, Maryland, and Virginia as well as state agency staff from MassWildlife and Mass DCR. Noreast #1 worked alongside other state, federal, and municipal fire resources from around the country to help contain this year’s largest U.S. wildfire, at close to one million acres. The crew’s work included direct attack on multiple areas where the fire had escaped the fireline perimeter, setting up hose lays to move water to remote areas, and patrolling the fireline scouting for and putting out hot spots. The crew worked long days and gained great experience working as a team, implementing fire suppression techniques, practicing safety measures, and enhancing leadership and communication skills.

“Getting to assist on an interagency wildland fire crew led by NPS and composed of federal, state, and tribal partners was a unique opportunity to learn new skills from crew members with different backgrounds and work collaboratively. Not only are we getting important training and experience on the fireline, but we’re helping people in rural communities and towns, protecting areas at risk on private lands and within our national forests, parks, and other public lands. These communities are strapped for resources during an unprecedented drought,” said Ben Mazzei.

Please join us in welcoming these dedicated individuals back from their rugged assignments. We are very proud of the assistance they provided to our western neighbors and know the experience they gained will translate directly to improving MassWildlife’s prescribed fire program and working as a collaborative and cohesive team with DCR, NPS, USFWS, and our local fire management partners. Special thanks to all of our wildland fire partners, the Northeastern Forest Fire Protection Compact (NFFPC), and the Northeast Interagency Coordination Center (NECC) for their tireless work and logistical skill in making these national mobilizations possible. 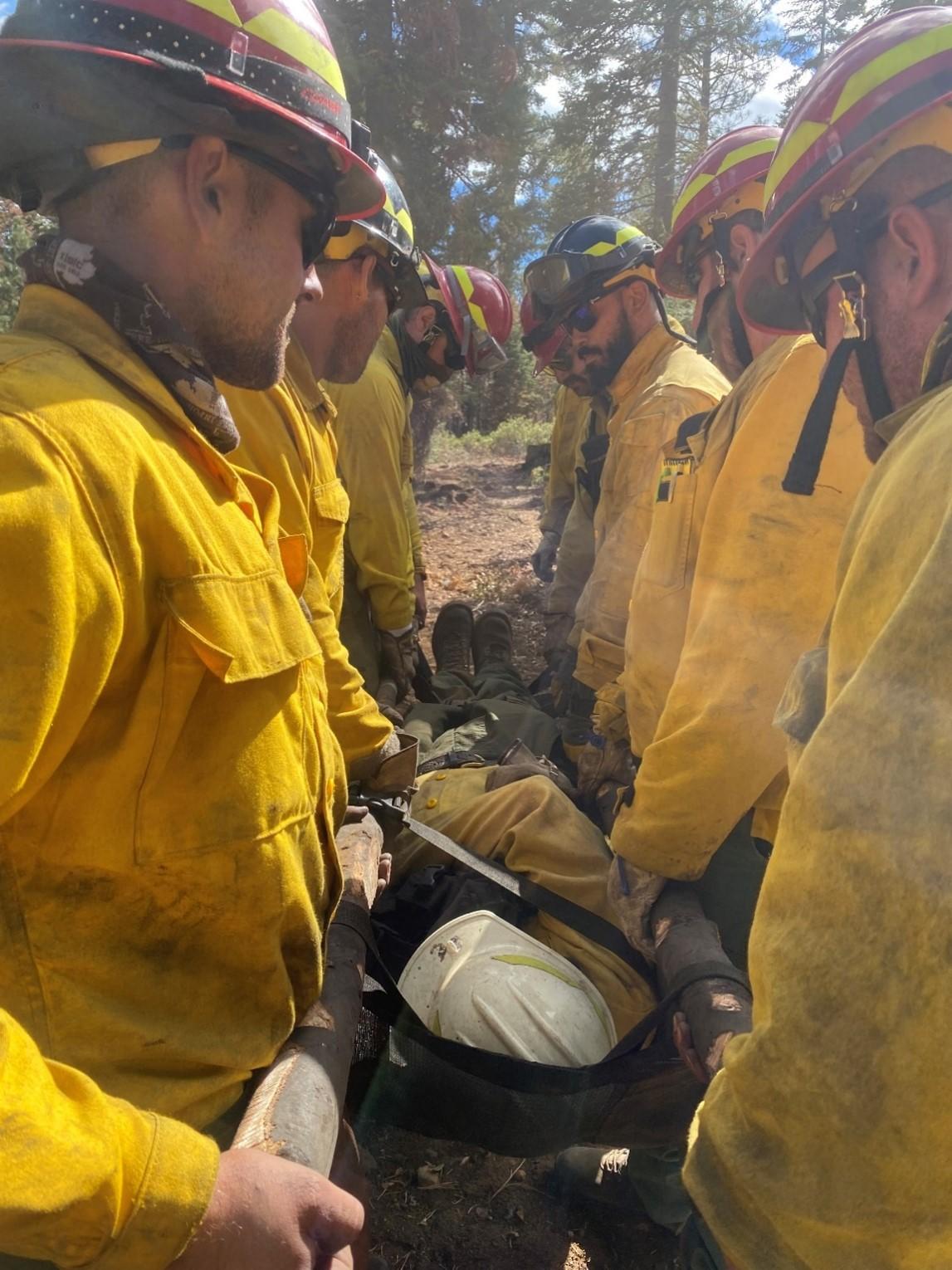 NorEast #1 practice a medical extraction during their break on the Dixie Fire, California. Photo: B. Mazzei, MassWildlife