Deirdre Kennedy, affectionately known as “Dee,” passed away on March 17, following a courageous battle with pancreatic cancer. Dee’s generous spirit, quiet optimism, tenacity, strong work ethic, and compassion for her staff, colleagues and community are among the memories many who knew her cherish. 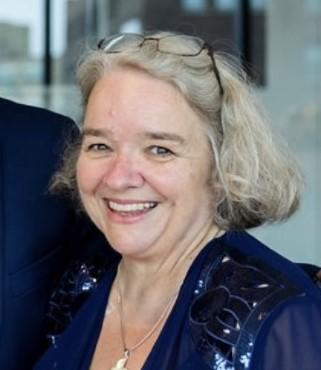 Chief Probation Officer at the Dorchester Municipal Court, Dee first joined the service as a Probation Officer at the court in September 1991. She was fluent in Spanish having spent time in Madrid, Spain to perfect her skills after graduating from Wellesley College in 1981 where she majored in Psychology and Spanish. Dee later earned two master’s degrees: one from the University of Massachusetts-Boston where she studied English as a Second Language (ESL) Instruction and UMASS-Lowell where she earned a degree in Criminal Justice. Dee started her professional career as an ESL teacher and volunteered in the community as an instructor and tutor throughout her career.

Dee found her passion working in Probation and as a domestic violence expert. She served on the Judicial Oversight Demonstration Initiative at Dorchester Court and managed the Domestic Violence Court in Dorchester from 2000-2005. She took a leave of absence from the court to lend her expertise in domestic violence at the Family Justice Center of Boston, a collaborative effort of the Suffolk County District Attorney’s Office, City of Boston, and 19 on-site criminal justice state and community-based partner organizations, including the Boston Police and Dorchester Court. She also performed this work at the national level.

As a Probation employee, she was known to hold perpetrators accountable. Dee was promoted to the rank of Chief Probation Officer in 2013. In 2014, she served as a peer reviewer for the Office on Violence Against Women.

Those who worked with Dee remember her good nature, wit, and feistiness. She was known to work well into the evening hours and it was not uncommon for her to still be at her desk at 10 pm. Many of her colleagues have individual recollections of their attempts to coax her to leave and go home.

Dee often rallied in support of those who appeared to have no voice and limited power. She fought for the air conditioning to remain on at night at the court during the summer so that the cleaning staff would not have to work in uncomfortable conditions.

If you met Dee once, one Probation employee noted, you automatically became a better person.

The following are remembrances of her and her impact on the courts and community which were shared by some of her staff, colleagues, and those in the community.

“When Dee was first appointed to her position and she wanted to make sense of it all, she would work endless hours in trying to accomplish this. I would occasionally leave work around 7 o'clock, peek in on Dee and ask her to not stay much longer. Her response would be  ‘just another half hour.’ Around 10:30 that night, and out of curiosity, I would call her office to see if in fact she had gone home, only to hear ‘Hello’. We finally agreed that the latest we were going to stay after work would be 7 pm. She is greatly missed.”

“Dee was a very special woman, someone I've had the pleasure of knowing and working with for 21 years. There was a great article in the Boston Globe about her and her service the day of her funeral. It is a huge loss for the entire Dorchester Court, Community at large, and Probation Department. Our loss is still very raw and emotional.”

“She was one of the greatest persons I've had the pleasure of meeting. I enjoyed being part of the strong leadership role she held at the Dorchester Division. When I used to see Ms. Kennedy walking around the Courthouse or inside her office, I used to ask her ‘How are you?’ or ‘How's your day?’ and she always said, ‘I'm chugging along.’ She never complained about work or providing our team with the support we needed to complete our daily tasks.”

“Deirdre Kennedy was a good person in and outside of the Dorchester Division of the Boston Municipal Court. Not only did she work tirelessly as the Chief Probation Officer at one of the busiest courts in the Commonwealth, but she also found time to help those less fortunate.”

“Dee gave to the homeless and notified probationers where they could go to get a bag of groceries for $1. Dee had an open-door policy and you could talk to her about anything. She was a bargain shopper who didn't like to cook, but would put together the best Caesar salads and fruit platters you could imagine. I remember years ago when she first told me about the bargains she got at the store Job Lot. She was so excited, I also became excited to go to the store.”

“Dee was small in stature, but she had a huge presence. She inspired you to step your game up and do even more. I enjoyed having her as a Chief. She was well-respected by her staff and the community she served. She will surely be missed. May she rest in peace.”

“I was a friend of Dee Kennedy and one of her biggest fans. She exemplified all of the qualities of a great Probation Officer. She was kind, thoughtful, and smart. She was brilliant. I really appreciated Dee because she leaned more towards the side of justice. She believed you should respect your probationers and the community but also be about the work of effecting change.”

“Dee would always greet you with her warm smile and Irish wit. Dee's energy, kindness, brilliance and generosity were second to none. If anyone needed help Dee was willing and able. She tutored so many, in math, science, languages, job/union applications, college applications, and countless other kind deeds. Dee lived life as a spiritually-guided individual, her thoughtfulness had no price, no expectation other than to pass on the kindness. If you met Dee once, you are a better person.”

“Dee was a positive force in the world and she profoundly impacted the lives of so many, from her family and friends to her colleagues, victims and clients.”

“Dee was kind, brilliant, and committed. A huge loss for the court and community, she was simply the best.”

"Dee had an open door policy that made me feel comfortable in consulting with her at any point in my learning as new incoming APO. She would inspire by taking on extra work such as supplying employee meetings with healthy snacks or being part of the Green Recycling Committee. I observed her as a woman leader, college-educated and bilingual and viewed her as an example to identify with. RIP".

“The things that I remember most about Dee Kennedy are her power, presence, and optimism. During Cultural Awareness Week last year, she wore a beautiful African Dashiki from Botswana or Southern Africa. She also celebrated her court and community in the most unique way. She protected them by organizing a flu clinic. I thought that is someone who really loves her community.”

“CPO Kennedy worked hard for Dorchester Court they knew it and honored her for it.”

“Dee was the epitome of excellence on all fronts and she will be greatly missed. As many of you are aware, Dee would have turned 60 years old on August 1 of this year. She departed much too early from us.”

"We look forward to continuing to celebrate Dee's wonderful life with a moving tribute to her memory on Thursday, May 9, at the Chief Probation Officer's, Inc. annual spring conference in Dedham.“

“Dee Kennedy was an amazing person and colleague. She epitomized what Probation is all about. She was deeply committed to her community and her staff. Her work made a real difference and she will be sorely missed.”

“You couldn’t have found a nicer person. She was committed to Dorchester Court, the staff and the surrounding community. She worked hard. On several occasions she and I were emailing each other after 10 pm and I would tell her to go home when I realized she was still in her office.”

“I had the great opportunity of working with Dee Kennedy and I too echo all of the accolades that people have said about her. She truly was special.”

"A few years ago, one of the programs I work with in Drug Court, Wyman Re-entry, was forced to move off Long Island because the state closed the Long Island bridge. Wyman and the other programs were forced to move with very little notice and had to scramble to find alternative sites to house their recovery programs. One of the consequences of that rushed move was that Wyman didn't have the time or ability to take its athletic equipment, baseball gloves, bats, footballs, etc., with them. So now Wyman was left without the equipment to get the men in their program out in the fresh air playing games and getting exercise, which is important to trying to get the men in recovery re-connecting with the world and their physical health. I was on a visit to Wyman, with Probation Officer Helen Coyne, in their new facility when we were told this story."

"Well we came back here to the Dorchester Court and PO Coyne let Dee know about what had happened. Dee then told us that a local sporting company, Franklin Sports, had a periodic sale of low cost sporting equipment and a sale was coming up.  She offered to take the money that we had contributed in Drug Court to buy some items for the men there, which, in and of itself, was generous. But she went further."

"Whatever money we contributed, Dee matched and contributed even more. She came back to the court with so many balls, bats, bases, gloves and equipment that it filled two counsel tables in our 6th session. I knew she spent a lot of her personal money on it and when I offered to contribute more from the Drug Court, she politely declined. She was just so happy to help."

"We invited Barbara Miller and Leigha Earl of Wyman to the Court to receive the items. They were overwhelmed with the support and generous spirit they were being shown. I received a wonderful note from Barbara Miller thanking us for our kindness, but I called her and spoke to her and cleared the record - it was Dee. It was Dee Kennedy that was behind it, not me. It was all her."

"There is a Hillel saying that "If I am for myself only, then who am I?"  For the short time that I was honored to know Dee it was clear that it was never about her. She wasn't about herself. She didn't have a selfish bone in her body. It was always about other and never can she help - if she could, she would. People loved her for that."

Note: It is not too late to submit a quote on your memories of Dee Kennedy. They will be featured in MPS' annual "In Memoriam," a special edition of the MPS Business Bulletin which memorializes Probation employees who have passed. This issue is scheduled for publication in May. Please forward to coria.holland@jud.state.ma.us and call 617-624-9319 to confirm your submission.