This invasive fish was most likely illegally released by a pet owner. This is only the fifth confirmed snakehead recorded in the Commonwealth since 2002.

On August 27, an angler caught a northern snakehead from Reservoir Pond in Canton. After obtaining and analyzing the specimen, MassWildlife confirmed this fish was a snakehead, an invasive species in Massachusetts. This fish was most likely released by a pet owner when it grew too large for its aquarium. Possession and liberation of snakeheads are both illegal in Massachusetts. Transferring exotic fish into local waterways can cause a host of problems, including competition with native species and spread of disease.

This recent catch is the fifth confirmed snakehead documented in Massachusetts since 2002. All snakeheads found in Massachusetts were adults, and MassWildlife has found no evidence of reproduction at any of the locations where the snakeheads were caught. During its routine fisheries sampling work, MassWildlife has visited over 7,900 locations statewide, documenting over 950,000 fish records since 1998 and has not captured any other snakeheads.

“While we are fortunate that snakeheads have not taken hold here in Massachusetts, this recent discovery highlights the need to focus on monitoring, education, and enforcement efforts to prevent the introductions of exotic species,” said Todd Richards, MassWildlife Assistant Director of Fisheries. Live fish may not be transported in Massachusetts without a permit, and liberation of all fish, including aquarium trade fish, into the wild in Massachusetts is prohibited without a permit from MassWildlife. Resource managers are concerned about the potential for snakeheads to reproduce and become established as a significant component of the fish community as a top predator, as they have in other states such as Maryland.

Massachusetts anglers have played an important role in reporting snakeheads and other non-native species like piranha, pacu, and other escapees of the aquarium trade and illegal exotic introductions. Snakeheads will go after bait and lures, and with nearly 200,000 anglers out on the water, the fact that so few have been caught in the Commonwealth is reassuring.

Anglers may confuse snakeheads with other native species like bowfin (see image below for identification details). Anyone who captures a fish that can be confidently identified as a snakehead should keep the fish, kill it, and report it to MassWildlife by emailing mass.wildlife@mass.gov or calling (508) 389-6300. MassWildlife encourages anglers who are less certain about the species of fish they have caught to send photos showing various angles of the fish. Under no circumstance should a suspected snakehead be transported to another location until identification is confirmed. 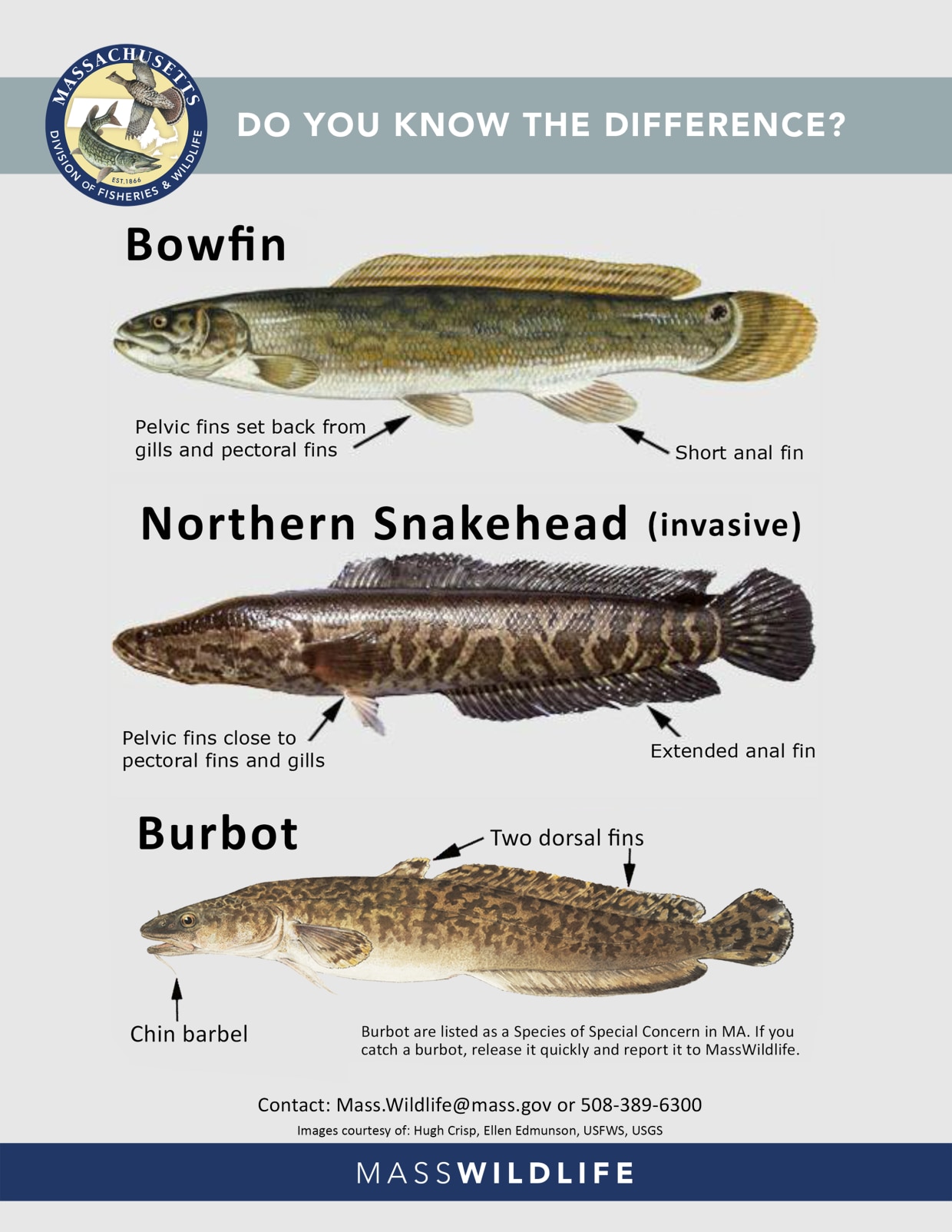 Click here for a printable version of the snakehead identification poster.