Thanks to years of focused habitat management, an array of wildlife is thriving at this unique public property.

The Massachusetts Division of Fisheries and Wildlife (MassWildlife) manages over 200 Wildlife Management Areas (WMAs) across Massachusetts. All WMAs are open to hunting, fishing, hiking, bird watching, and many other ways to enjoy nature. Every WMA is unique, but some stand out as particularly special. The Frances A. Crane WMA on Cape Cod, in Falmouth and Bourne, is both a popular hunting destination and an area managed to provide habitat for a wide variety of common and rare wildlife. The sandplain grassland and pitch pine-scrub oak woodland found at Crane WMA are inhabited by more than 20 species listed as endangered, threatened, or of special concern under the Massachusetts Endangered Species Act, ranging from grassland birds to less familiar creatures such as butterflies and moths, tiger beetles, and plants.

The bulk of Crane WMA was purchased by the state in the late 1950s, with additions since, bringing the current size to 2,466 acres. Before the initial purchase, the grassland at the center of the property was an airfield. Much of the land adjacent to the airfield consisted of agricultural fields used to grow tomatoes and other crops. Since the 1950s, MassWildlife has mowed the airfield, which has kept it open by excluding trees and other woody plants. However, mowing without prescribed fire allowed spread of non-native grasses and invasive shrubs. In addition, much of the adjacent agricultural land was not managed, and trees took over. By 2000, the land east and west of the large grassland consisted primarily of oak and pine woodland, unfortunately much of it also infested with non-native, invasive plants.

In response, MassWildlife enlarged the main grassland at Crane WMA between 2014 and 2017 by cutting adjacent woodland, followed by removing stumps, grading, and planting of native little bluestem grass. The grassland is now nearly 400 acres in size, making it one of the largest warm season grasslands in coastal New England. During the same years, MassWildlife aggressively thinned the woodland to the east and west of the grassland, and left scattered trees to promote future growth of open oak woodland with pitch pine, scrub oak, lowbush blueberries, and other native vegetation. Since 2017, MassWildlife has conducted additional habitat restoration with a combination of mowing, prescribed burning, and control of non-native, invasive plants. Current goals are maintenance of the enlarged sandplain grassland, and to the east and west, restoration and maintenance of a mosaic of oak woodland, pitch pine-scrub oak shrubland, and smaller grassy openings. Such a variety of native vegetation across the WMA will provide food and cover for a diversity of wildlife, including game species, rare and endangered species, and all the other animals and plants that are part of a healthy natural landscape.

The habitat restoration that began in 2014 has resulted in steady progress toward MassWildlife’s goals at Crane WMA. Some of the goals have been more immediate and obvious, for example better hunting after thinning of dense vegetation. Other goals, such as increasing populations of rare and endangered species, have taken more time—but in recent years have become a reality. For example, the number of breeding pairs of grasshopper sparrow has more than quadrupled in recent years. The purple tiger beetle formerly occurred in low numbers in a few small areas of the WMA; it is now found in greater numbers across a significantly larger portion of the WMA. Another example is the sandplain gerardia, an endangered plant that has been thriving as a result of habitat management efforts.

While habitat management is a never-ending process in disturbance-dependent natural communities such as sandplain grassland, pitch pine-scrub oak shrubland, and open oak woodland, at Crane WMA the future looks bright for these habitats and the wildlife that lives there. And if you’re not already among the outdoor enthusiasts that enjoy spending time at Crane WMA, you may want to visit! For more information about Crane or any other WMA, please visit the MassWildlife Lands Viewer. 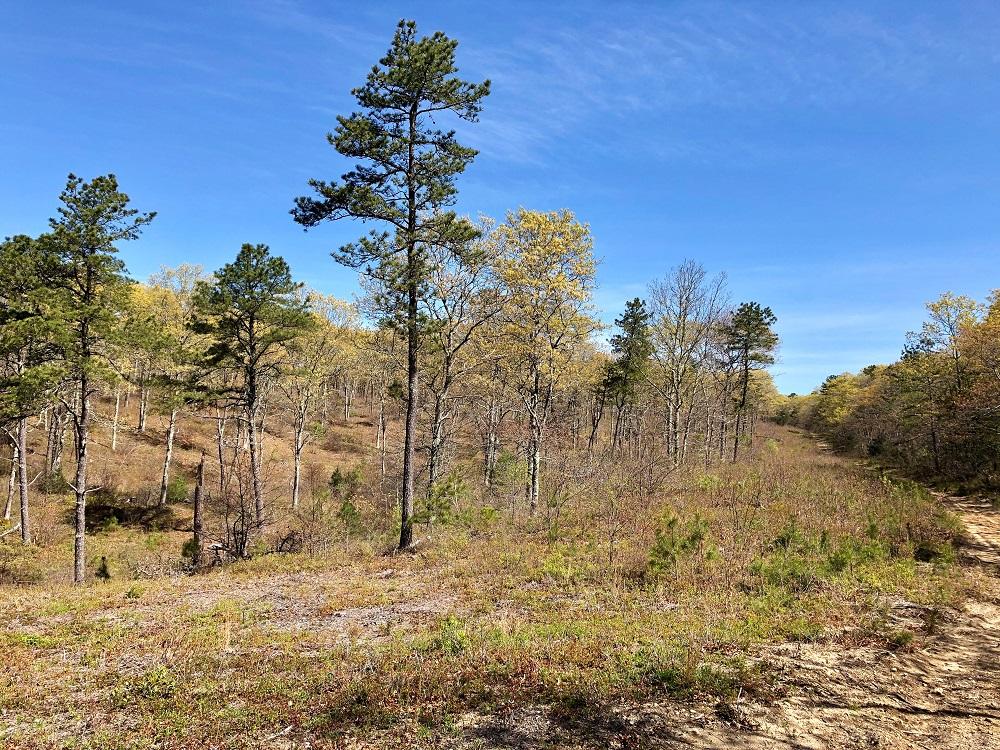 Related to MassWildlife Lands: A Focus on Frances A. Crane Wildlife Management Area