The five Drug Courts are among the 26 Drug Courts and one of the 45 Specialty Courts across the state which provide court-supervised probation and mandated treatment. Ten new Drug Courts are being planned for this year as well as one new Veterans Court and a new Mental Health Court.

“The Drug Courts are essential in the treatment of those we supervise with chronic substance abuse issues. With this in mind, Probation has moved from monitoring and compliance to an increasingly sophisticated model of recovery with all of the complexity and challenges that brings but with far greater evidence of hope and long-term desistence and reduced crime and better outcomes for those we work with, their families and our communities,” said Commissioner Edward J. Dolan.

Greenfield District hosted a January 2 graduation for Kimberly Silliman of Greenfield. The ceremony featured congratulatory remarks by Probation Officers to Silliman who completed the program after 14 months. First Justice William F. Mazanec, III presided. Mazanec celebrated his 10th anniversary as a member of the GDC’s Drug Court team in December. In addition to graduating Drug Court, Silliman also completed the Greenfield Womanhood Program. Greenfield’s Drug Court graduation is the fourth in the 2019 fiscal year. The Greenfield Drug Court was launched in 1998 and is one of the oldest, continually operating Drug Courts in the Commonwealth, according to Chief Probation Officer Antoinetta “Tonie” DeAngelis.

The Charlestown Substance Abuse Coalition (CHART) Drug Court at BMC-Charlestown celebrated the graduation of two participants David Couto and Orlando Ambert, on December 19. Similar to most Drug Court participants, Cuoto and Orlando had their challenges and experienced triumphs, according to Probation Chief Michelle C. Williams. Cuoto prevailed after four years of trying to complete it. Orlando did not violate once during the course of the program which Williams described as “remarkable.”

First Justice Lawrence E. McCormick presided over the ceremony and Williams served as the Master of Ceremonies. The event featured keynote speaker Superintendent Yolanda Smith of the Suffolk County Sheriff’s Department. This was the court’s 8th graduation since the Drug Court launched in Fall 2012. A total of 17 participants have graduated from the program to date. Of those 17, three are working as recovery coaches and are pursuing long-term careers in the treatment field, according to Chief Williams.

"They have taken the mantra to Chart a new course in their life of sobriety by indulging themselves in the field to give back to those still in dire need as they once were," Willliams said.

Springfield District Drug Court hosted its graduation on December 19 for two participants—27-year-old Nicolas Cuddemi and a 36-year-old woman who does not want to be identified. Cuddemi first entered the program in September 2017. During his time in Drug Court, Cuddemi welcomed his first child, a daughter, and has not only maintained his sobriety for more than a year but has held a full-time job in the restaurant industry.

The other graduate is a 36-year-old woman who has suffered with a substance use disorder for more than half her life. In addition to graduating from Drug Court, she has also successfully completed a residential treatment facility and is now gainfully employed and lives independently. Both individuals represent the Drug Court’s third graduation class. Springfield District Court Judge Charles Groce III presided. Groce commented, “It’s not about how many chances you’ve had. It’s about what you’re going to do with this chance, right here, right now.”

Springfield District Chief Probation Officer Terence S. O’Neil said of the graduates, “I believe the two current graduates really reveal the uniquely collaborative, supportive and redemptive nature of our specialty courts. They have both experienced some ups and downs in the program but have really pulled through the tough times in order to complete all requirements and attain graduation.”

Taunton District Drug Court hosted its first graduation on November 15 during which Drug Court participants, court personnel, and members of the community paid homage to Taunton Police Officer John Munise, a member of the Drug Court team, who passed away following a battle with cancer. Five participants graduated from the program, according Chief Probation Officer Kelly Hamilton-Welzel. The graduates were also faced with tragedy early on when two Drug Court participants were killed in a car accident in Rehoboth. The deceased, Joshua Troufield and Elizabeth Resendes, were a couple and parents of several children.

“It was very powerful and emotional for everyone,” said Hamilton-Welzel.

The somber recollection of all that the participants had endured turned into a jubilant graduation celebration which was presided by Judge Edmund "Chuck" Mathers. The five graduates, who spent 18 months in the program, include Chris Brooks, 50-years-old; Luke DaSilva, 32; Ignatia Jewers, 29; Nicholas Bickel, 33; and Paul, who did not want his surname or age published.

Dudley District Drug Court held its sixth graduation since the program first launched in the Spring of 2014. The October 10 event featured two participants—Matthew Nugent, 34-years-old Elise Elia, also 34, who completed the program. Nugent and Elia bring the total number of graduates to 50 since the Drug Court was established. Nugent was invited to share his story at a local school and continues to remain involved in the court’s Peer Support group run by the court, according to Dudley District Chief Probation Officer Nilza Sylvestre. Elia was unified with her three children and is now living independently, and sober, Sylvestre said. 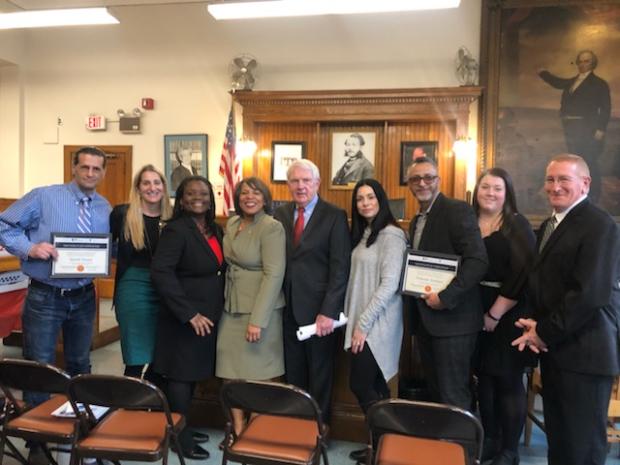