From a young age, we're taught planting trees is good for the environment, so alternatively, cutting down trees is bad—right? Well, it's not that simple.

Earth Day was last month, bringing attention to our planet’s most pressing environmental threats and inspiring calls for action like tree planting. From a young age, we're taught planting trees is good for the environment, so alternatively, cutting down trees is bad—right? Well, it's not that simple.

Forest carbon is a hot topic these days and with good reason. Trees remove carbon from the atmosphere and store it as wood, which helps mitigate the negative impacts of climate change. While some people believe the best use for a tree is to leave it alone to keep taking more carbon out of the atmosphere, this blanket “do-nothing" approach is an oversimplification of a complex issue. Forest carbon and climate change need to be addressed within a framework of the numerous benefits trees and forests provide including clean water and air, wildlife habitat, renewable wood products, aesthetics, and recreational opportunity—as well as carbon sequestration and storage. And in our inhabited landscape we never really “do nothing.” As a modern society, we don’t let wildfires burn, we don’t let beavers flood housing developments, and we don’t leave behind the “mess” of blown-down trees in our streets after a tornado or hurricane. We value human lives and the safety of our homes more than we value letting nature take its own course.

According to a recent report, we are losing 13 acres of forestland to development in Massachusetts every day. Without question, the most important action to take relative to forests and climate change is to keep forests from being cleared for development. MassWildlife and its conservation partners are doing their part by permanently protecting thousands of acres of forest each year and ensuring they will continue to remove carbon from the atmosphere and keep it stored. But it’s important to remember: climate change mitigation isn’t the only environmental goal, and land protection alone isn’t enough to conserve wildlife and their habitats. 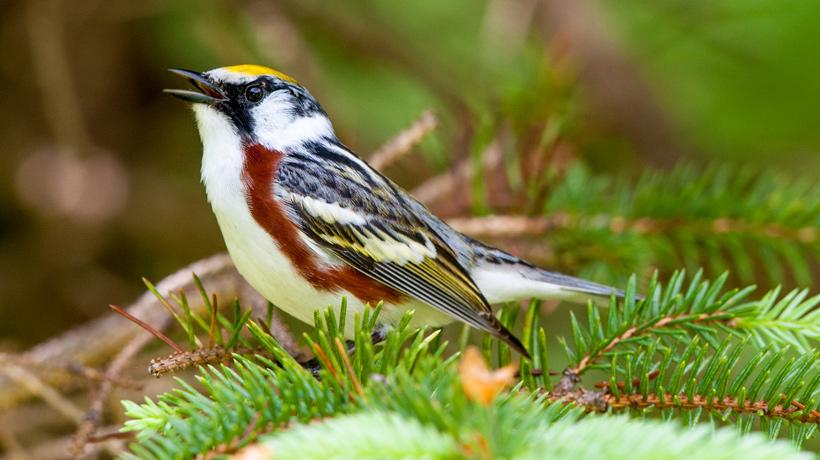 The chestnut-sided warbler is a habitat specialist and gathers insects in brushy areas. Photo by Bill Byrne/MassWildlife.

At some point in their life cycle, many types of wildlife rely on open habitats that just wouldn't exist with a “do-nothing” approach. Examples include ruffed grouse, American woodcock, New England cottontail, buck moth, and wood turtle, white-tailed deer, wild turkeys, and a variety of songbirds. Over time, changes in human land use have fundamentally altered natural disturbance processes like flooding and fire that historically created a diversity of wildlife and vibrant open habitats. Some of these open habitats, such as shrublands, grasslands, and young forests, are now rare in Massachusetts due to development, forest maturation, and fire and flood suppression. Without habitat restoration and management, we would lose a number of native wildlife, tree, and plant communities. In fact, over 40% of the 427 plants and animals currently listed under the Massachusetts Endangered Species Act depend on habitats needing active management during at least part of their life cycle. If you’re wondering what we mean by “active habitat management”, this can include strategically cutting trees, mowing, invasive plant removal, and prescribed fire.

As the state agency responsible for the conservation of freshwater fish and wildlife, it is MassWildlife’s core mission to address the effects of human activity on wildlife and their habitats, including over 226,000 acres of conserved lands under MassWildlife’s care and control. Using information from scientific literature, biological monitoring, and private conservation organizations, MassWildlife’s staff of professional biologists and foresters set habitat goals for these lands designed to conserve a wide variety of wildlife and plants. MassWildlife’s habitat management goals offer a balanced approach by seeking a diverse portfolio of habitat composition, from passively managed forest reserves with no tree cutting to the other end of the spectrum of open canopy grasslands, shrublands, and young forests which require active forestry activities like tree cutting and mulching. 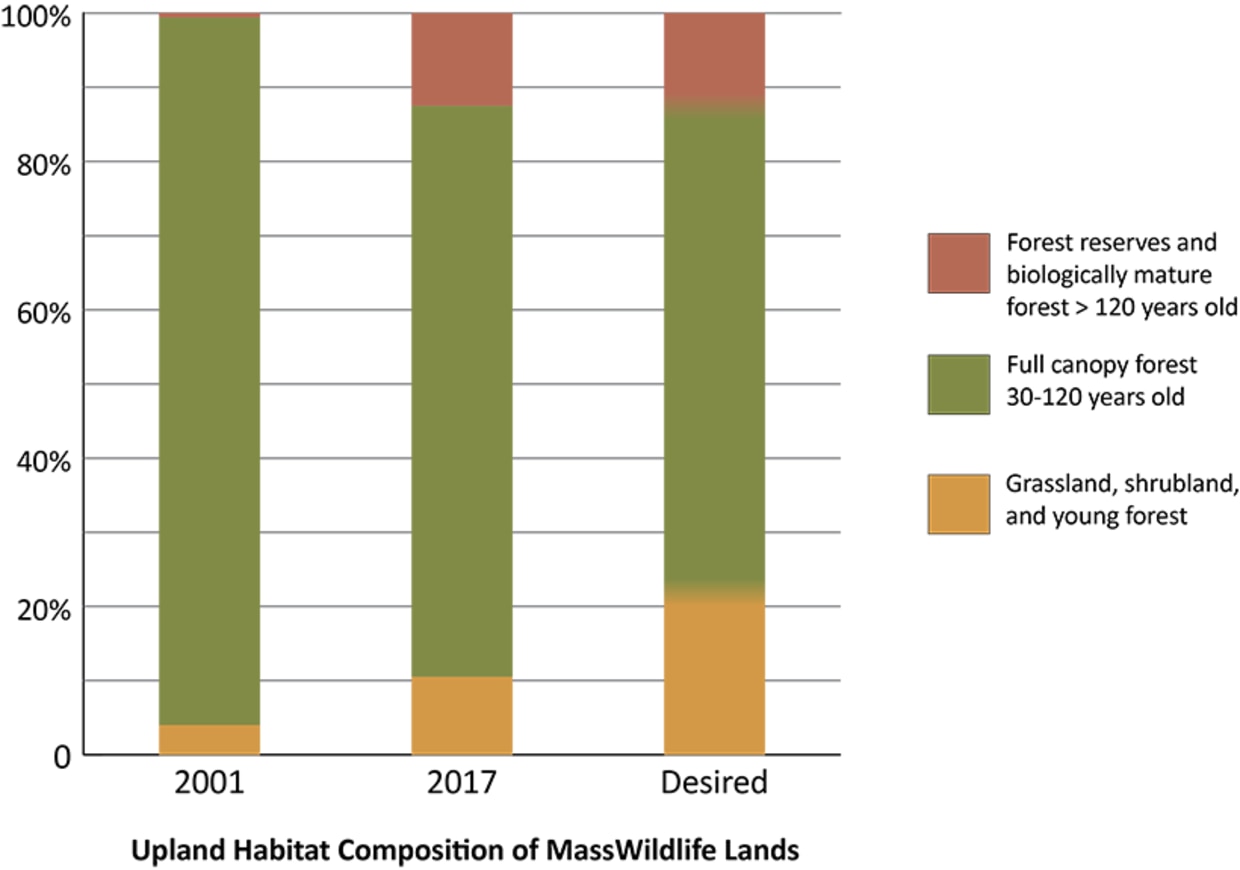 In keeping with the agency’s science-based habitat goals, the majority of MassWildlife’s forestlands will continue to be managed as forests. Because of this commitment and continuing forest growth, carbon accounting for MassWildlife-managed lands shows a net annual increase in carbon storage even after factoring in carbon release associated with active habitat management required for open habitats. In fact, the amount of additional carbon that could be stored by eliminating tree cutting on MassWildlife lands is less than 2% of the amount of carbon that our forests are already removing from the atmosphere each year. In exchange for that small amount of carbon, MassWildlife maintains the benefits of clean air and water, restores habitat for wildlife, provides people with a variety of nature-based recreational opportunities, and also increases the diversity and resiliency of the landscape to climate change impacts, reducing the likelihood of catastrophic carbon releases in the future.

While it might make for an easy slogan to say “Never cut down trees,” that’s not the best call-to-action if you care about wildlife conservation. Environmental problems are often complex, and require complex solutions. It’s not always as easy as a simple “either-or”. The ultimatum doesn’t need to be climate change mitigation OR wildlife conservation. With MassWildlife’s balanced habitat goals, we can have both. In the last 5 years, MassWildlife's Wildlife Management Areas are estimated to have stored over 2 million tons of carbon, and MassWildlife staff restored important wildlife habitat on nearly 12 thousand acres. MassWildlife remains committed to fulfilling our mandates of protecting all of the Commonwealth’s biodiversity AND reducing greenhouse gases.

Related to Why cutting trees isn't always a bad thing

Why is habitat restoration & management needed on MassWildlife lands?