This page, Benjamin Franklin Thomas , is offered by 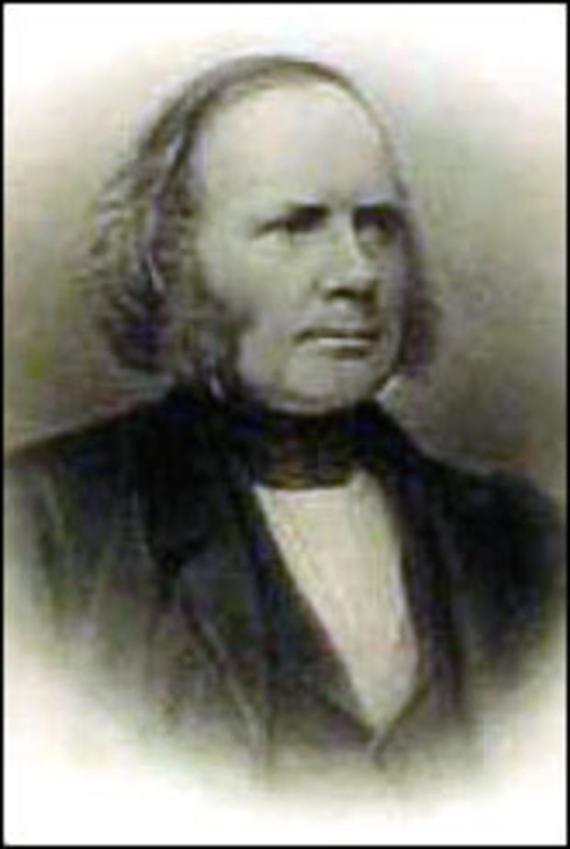 The Honorable Benjamin Franklin Thomas, a justice of this court from the twenty-eighth day of January, 1853, to the first day of January, 1859, died at his summer residence in Beverly on the twenty-seventh day of September, 1878. A meeting of the members of the bar of Suffolk County was held in Boston on the fifth day of October following, at which resolutions were passed, which were presented by the Attorney General to the full court on the seventeenth. Before presenting them, the Attorney General addressed the court as follows:

May it please your Honors, -- The Honorable Benjamin Franklin Thomas, formerly one of the justices of this court, died at Beverly on the twenty-seventh day of September last. He died suddenly, but surrounded by his family and friends, realizing the Spanish benediction which he so much admired, "May you die among your kindred."

Born in Boston on the thirteenth day of February, 1813, he entered the freshman class in Brown University in 1826, being a little more than thirteen years of age. His classmate and friend, the Honorable Ellis Ames, of Canton, in a brief note addressed to me a few days since, thus writes of him: "On my entering college, at the commencement of the sophomore year in 1827, my principal attraction was to my classmate, Benjamin F. Thomas, then fourteen years old the February preceding. More than three years younger than myself, I looked upon him as a mere boy. How handsome he was, with bright eyes, plump cheeks, and overflowing with vivacity! He was a good scholar in every department of study, punctual and faithful in the performance of every duty required of him as a college student, and exemplary in his moral character. In due time we found that in intellectual power he was no boy. In reciting from Homer in the original Greek, he was not only critical in literal construction and in applying the rules of grammar, but he read the whole of the Iliad in English as a great epic poem, viewed the relation of parts to the whole, distinguishing the brilliant passages, and taking great delight in repeating them from memory. Our class, during the junior and senior years, made their recitations both forenoon and afternoon to Dr. Wayland, then in the height of his zeal as a teacher, himself only thirty-three and thirty-four years of age. No book was allowed to be carried into the recitation room. Our subjects were Moral Philosophy, Rhetoric, Criticism, Political Economy and Intellectual Philosophy. In all these subjects Thomas was well versed. I remember his discussions on points in Intellectual Philosophy with Dr. Wayland, which proved him, as we of his classmates thought, to be possessed of extraordinary intellectual powers." I have quoted these words from a loving and honest classmate, because they best give us the characteristics of the boyhood and youth of Judge Thomas. How well in after years he redeemed the promises of his youth, I need not repeat in this presence.

With his merits as a lawyer, a judge and a statesman, we are all familiar; and very high rank has been accorded to him by those the best qualified to judge. His acquaintance for many years, and, for the last eighteen years of his life, enjoying his friendship, I prefer to dwell on his personal gifts and qualities. His heart went out to every kindly sentiment and every humane influence. That class of persons in our community (happily so large) who devote themselves to the ministrations of our holy religion, not only as the ministers of the gospel of Christ, but as laymen in the administration of beneficent charities, unknown to the outside world, constantly sought of him that aid and advice which his experience as a lawyer and a judge, and his knowledge of affairs, rendered of infinite value, and they never sought his aid in vain. He found his compensation in the benedictions of the poor and the distressed, the widow and the fatherless, who have lost in him a benefactor whom they alone could appreciate.

To the young members of the profession, he was a kind adviser and sympathetic friend; and many a young lawyer, upon presenting to the court his first brief and argument, has been restored to consciousness and self-possession by the kindly attentions of Judge Thomas, when disconcerted by the more abrupt manners of a no less kindly, but less thoughtful, associate. He loved his profession as one of the highest and noblest in its purposes and achievements; and every worthy member of it was to him a brother. He was steadfast in every movement for its elevation, exerting to that end all his influence, both in public and in private. As president of the Bar Association, in the success of which he was deeply interested, he never failed to attend its meetings, and no one who was present at the dinner of the Association in January last will ever forget the felicitous address with which he opened the intellectual exercises of the occasion, and the entire abandonment to enjoyment with which he threw himself into its festivities.

He was such an advocate as is described by Lord Chancellor Campbell in his memoir of Erskine, -- an advocate inspired by a generous love of fame, and desirous of honorably assisting in the administration of justice by obtaining redress for the injured and defending the innocent; one who has studied liberally the science of jurisprudence, and stored his mind and refined his taste by a generous acquaintance with elegant literature; one who had an intuitive insight into human character, and into the workings of human passion; one who was able, by his power of persuasion, to give the best chances of success to every client whom he represented in every variety of public causes; and one who, by the victories which he gained and the principles which he established, has helped to place the free constitution of his countrymen on an imperishable basis.

If the court please, I am requested by my brethren of the bar to present the following resolutions to the court, and to ask that they may be entered on its records as an enduring testimonial to his merits by those who knew him best.

Resolved, That the members of the Bar of Suffolk County desire to record their sense of the great loss which the legal profession and the people of the Commonwealth have sustained in the death of Benjamin Franklin Thomas, formerly Associate Justice of the Supreme Judicial Court; a wise counsellor, an eloquent advocate, a patriotic citizen, an upright man. As a judge, he was remarkable for his sound learning, vigorous intellect, strict impartiality, and for his uniform courtesy and kindness to all. As an advocate, his efforts were characterized by clearness of statement, methodical arrangement, logical reasoning and fervid eloquence. His public career illustrated his love of country, his devotion to duty, and his personal independence. The purity of his life, his nice sense of honor, the warmth and steadfastness of his affections, endeared him to all who enjoyed the privilege of his friendship.

Resolved, That we ask that these resolutions be presented by the Attorney General to the Supreme Judicial Court, with the respectful request that they may be entered on its records as an enduring testimonial to the merits of the deceased by those who knew him best.

Resolved, That we deeply sympathize with the family of our departed brother, and that a copy of these resolutions be transmitted to them by the chairman and secretary.

Brethren of the Bar: The court heartily concurs in your testimony of respect and affection to the late Judge Thomas.

When comparatively a young man, he was conspicuous in the front rank of a very able bar; before he was forty years old, he was appointed, with the general approval of the profession and of the public, to a seat upon this bench, where, in a service of less than six years, he gained a lasting judicial fame, such as has hardly ever been acquired in so short a time; and for the twenty years since his resignation he has been known and honored as one of the first lawyers and best citizens of the Commonwealth.

Warm-hearted, sincere, courageous, independent, high-minded and public-spirited; remarkable, throughout his career at the bar, alike for the enthusiasm with which he threw himself into a cause, and for his prudent and thorough preparation of it; he was a beloved leader, and a valued and trusted colleague. He looked upon precedents not as masters, but as aids, and hesitated to follow them, unless satisfied that they were founded in principle. He was an ardent student of the history of constitutions, law and government in England and America. He had that characteristic of the greatest lawyers of both countries, an inborn love of freedom and of justice, and a profound conviction that freedom is best assured, and justice best attained, by having both sides of every question fully and fairly argued. In the discharge of every public trust, and in the performance of every professional duty, he acted upon the motto of Selden, "Περίπαv_ςτ_vv_λευθερ_αv" -- "Above all things, liberty."

In private life, he was domestic, companionable, hospitable, generous. He partook of the opinion of Bacon, that a garden is the purest of human pleasures, and the greatest refreshment to the spirits of man. As often as he changed his dwelling-place from one part of the State to another, he thought it essential to the completeness and comfort of his home to plant and cultivate an orchard, in which he might gather recreation for himself and gifts for his friends. Few professional men in active practice have been greater readers of poetry and philosophy. He was a special admirer of the lofty sentiments and majestic rhythm of Milton. He was familiar with the chief works of the foremost thinkers of our own time. But no subtlety of logic, no brilliancy of theory, could shake his hold upon that hope which is as an anchor of the soul, both sure and steadfast, and which entereth into that within the vail.

In accordance with the request of the bar, their resolutions, together with a memorandum of these proceedings, will be entered upon the records of the court.

The court then adjourned.