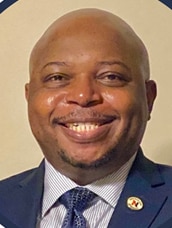 In Missouri, he was involved in drafting and passage of over twenty pieces of legislation – some of which have established hearing aid distribution programs for low-income individuals, establishment of a statewide support service program for DeafBlind individuals to live a more independent life, a Commercial Driver License law that paved the way for Deaf people to obtain licenses, 911 service legislation that repositioned the Missouri 911 Service for Next-Generation 911 service, overhauling the Missouri state Interpreter Certification System, and collecting statewide data to identify the Deaf and Hard of Hearing population in Missouri. He held two Missouri gubernatorial appointments as a board member of the 911 Service Board and the Governor’s Council on Disability. He was a member of the Relay Missouri Advisory Committee, Missouri Department of Mental Health Deaf Advisory Council, and Missouri DeafBlind Technical Assistance Project Advisory Committee.

Dr. Sotonwa has played key roles within and outside Deaf communities in the United States and African countries. He was formerly the Vice President of National Black Deaf Advocates (NBDA), the nation’s foremost civil rights organization serving Black Deaf community and was also the Chair of the NBDA Board of Directors. Dr. Sotonwa is currently a board member of the Telecommunications for the Deaf and Hard of Hearing, Inc. (TDI) as well as several think-tank organizations that focus on disability rights advocacy around the world. He recently served as the technical lead member of a consortium of African disability rights law experts that drafted the Nigerian Disability Rights Law modules funded by the Open Society Initiative for West Africa (OSIWA).

Dr., Sotonwa holds a Master of Laws (LLM) degree from Howard University School of Law in Washington, D.C. He also holds a Doctor of Law and Policy (LPD) Degree from Northeastern University in Boston Massachusetts, where he conducted his doctoral dissertation on “The Lived Experiences of Deaf Suspects during Police Interrogations: An Interpretative Phenomenological Analysis.”

A consummate advocate Dr. Sotonwa brings a lot of passion and a community-centered leadership approach to MCDHH. A recipient of numerous awards; He was most recently honored as the recipient of 2020 Judge Arnold Krekel Trailblazer Award for Human Rights.

Massachusetts Commission for the Deaf and Hard of Hearing

MCDHH provides accessible communication, education, and advocacy to consumers and private and public entities so that programs, services, and opportunities throughout Massachusetts are fully accessible to persons who are deaf and hard of hearing.

MCDHH staff are returning to work using a hybrid work model: staff will be working remotely and in-office. In person appointments should be scheduled in advance and directly with the staff member.

Interpreter/CART requests are being processed online, visit https://www.mass.gov/how-to/how-to-request-an-asl-interpreter-or-cart-provider to submit your request.

For current information regarding the Coronavirus (COVID-19) pandemic visit: http://www.mass.gov/covid19 or call 2-1-1