This page, Waldo Colburn, is offered by 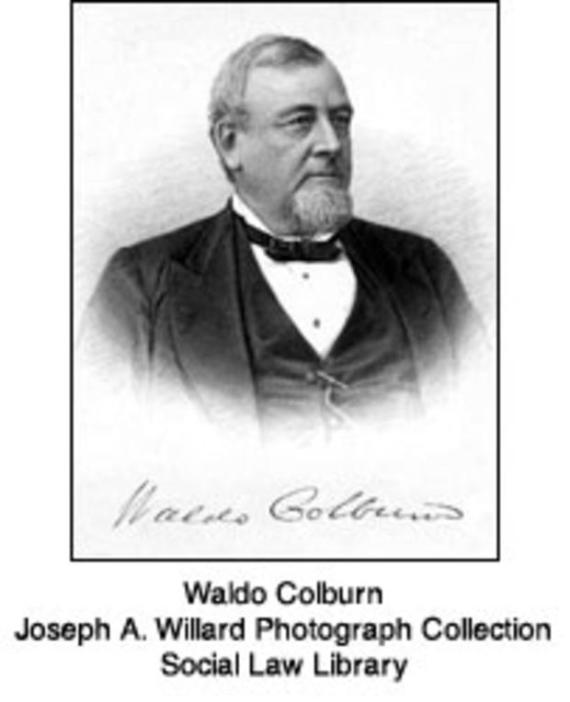 The Honorable Waldo Colburn, a Justice of this Court from the tenth day of November, 1882, died at his residence in Dedham on the twenty-sixth day of September, 1885. A meeting of the members of the Suffolk Bar was held in Boston on the twentieth day of the following October, at which resolutions were passed, which were presented to the full court on the same day. Before presenting them, the Attorney General addressed the court as follows:

May it please your Honors: It is entrusted to me by my brethren of the bar to call the attention of the court to the decease of the Honorable Waldo Colburn, an Associate Justice of this Court, which occurred at his home in Dedham on the twenty-sixth day of September, after a painful illness of many months; and although the sad event was anticipated, its announcement occasioned profound sorrow to all who knew him.

In considering his career, we observe a noble type of New England character. He was born in Dedham on November 13, 1824, and attended the public schools there until fifteen years of age, when he went to Phillips Academy, Andover, where he remained nearly six years. Subsequently, he studied civil engineering and surveying. In May, 1847, he commenced the study of law, which he pursued in the office of an attorney and at the Harvard Law School, and was admitted to the bar in May, 1860. He continued the practice of law until May 27, 1875.

He was chairman of the board of selectmen, assessors, and overseers of the poor of his native town for nine consecutive years. He represented Dedham in the Massachusetts Legislature three years, in the House of Representatives in 1853 and 1854, and in the Senate in 1870. He was president of the Dedham Institution for Savings, and a director of the Dedham National Bank. In 1875, Governor Gaston appointed him an Associate Justice of the Superior Court, and in 1882 Governor Long promoted him to a position upon this Bench, which he held to the time of his death.

On the farm, Mr. Colburn necessarily formed habits of industry and economy; in the district school and academy, he laid the foundation for education and culture; in the town, by service and association, he became familiar with its government and necessities; and in the Legislature, in the practice of his profession, and in other responsible positions, he was, by experience, study, and observation, acquiring that thorough and practical knowledge of our government and of men and things which is indispensable to the great office of judge of this court.

Judge Colburn was a plain man, of broad common sense, faithful to every trust and in every position. He was thoroughly appreciated by his neighbors and townsmen, and greatly beloved by the bar of the Commonwealth.

When attacked by the distressing disease which finally caused his death, he was in the midst of his judicial usefulness, happy in his home and with his work, enjoying the confidence of his associates and the public. Those who visited his bedside in the early summer, while he retained full possession of his intellectual faculties, although emaciated and wasting away physically, will never forget the patient courage which he exhibited.

His physician and friends spoke words of encouragement when there was little or no hope, but the judge was not to be misled; he had been a careful observer of his own gradual decline, enduring great suffering without a murmur, and with judicial calmness he discerned the final end, and prepared for it.

Each day brought him nearer the grave, -- face to face with death. Weak and weary, he was preparing to give up his lifework; he had faithfully served in and retired from many places of trust and responsibility, and was about to retire from life itself.

His calmness and composure under such circumstances would indicate similar feelings with those of Edward Everett as expressed in a letter to Governor Clifford, as follows: "I have never filled an office which I did not quit more cheerfully than I entered. I am not sure that it is not so, in most cases, with the last great act of retirement, not from the offices and duties of life, but from life itself."

May it please your Honors, in compliance with the request of my associates, I move that the resolutions now presented may be entered of record.

The members of the Suffolk Bar desire to record their sense of the loss which the Commonwealth has sustained in the death of Mr. Justice Colburn.

He was in the best sense of the word an excellent magistrate. Sprung from old New England stock, his qualities were characteristic of his race. He had the quiet independence, the native simplicity, the freedom from self-assertion or pretence, the contempt for artificial distinctions, the reserve of manner, the genuine manliness, and, in a remarkable degree, the strong common sense, which distinguish the New England character. His own sense of propriety, and not the opinion of others, was his guide through a life which from youth to age was stained by no mean or dishonorable act. Such qualities inevitably commanded the confidence and respect of the community in which he lived, and, united with a mind of great strength and clearness, made him easily the leader of the bar in his native county for many years.

After long and widely varied practice had added a firm grasp of legal principles, an unusual familiarity with their daily application, and an intimate knowledge of men, he was promoted to the bench, where he won at once the confidence of the bar and the public. A strong judicial instinct, a high sense of duty which forced him, even when his powers were weakened by approaching death, to finish all the work which had been assigned to him, an unvarying courtesy, a singular patience, a quiet dignity, an indifference to every consideration except the merits of the case before him, combined with long experience to make him an admirable judge. His death at an age when, with his strong constitution, a long and useful career seemed open before him, is a loss to the public service which we sincerely deplore.

Resolved, That the Attorney General be requested to present these resolutions to the Supreme Judicial Court, and to ask that they be entered on its records.

Brethren of the Bar: The death of Mr. Justice Colburn, which has called forth your expressions of respect and grief, is felt with a double weight of sadness by us, his associates, who by our intimate connection with him have learned to value very highly his ability and usefulness as a magistrate, and the many endearing traits of his personal character. He was stricken down by disease in the maturity of his powers, at a time when it seemed reasonable to expect that he might give to the public many years of useful and honorable labor.

He presented a striking example of strong, sturdy New England character. His remote ancestor came to this country from England in 1637, and soon received a grant of land in Dedham, which he improved as a farm, and which has remained in the family, from generation to generation, to this day.

Judge Colburn inherited a sound mind in a sound body, and both were developed and strengthened under the healthy influences of New England rural life.

He had not the advantages of a collegiate training, but received his education at the public schools and at Phillips Academy in Andover. How well he overcame this disadvantage by the faithful and patient industry of his subsequent life, his eminent success in his chosen profession fully attests.

After leaving Phillips Academy, he pursued the study of civil engineering, a profession in which he always retained a lively interest. He soon, however, resolved to make the profession of law his life-work, and was admitted to practice in 1850. His natural ability, his patient industry, his fidelity to his duties, his simple and manly character, his plain and blunt, but courteous and genial manners, at once commanded the respect of the people, and soon placed him in the front rank of the bar of Norfolk County; and when, in 1875, he was appointed a Justice of the Superior Court, the wisdom of the selection was universally conceded.

In the midst of all his duties at the bar and upon the bench, he always found time to devote to other public duties and interests. A firm believer in New England institutions, he took an active part in the public and prudential affairs of his town, as well as in the private charities and interests of his townsmen. He mingled largely with men of all pursuits, and thus gained a wide experience of affairs and of men, which was of great benefit in the discharge of his judicial duties.

The most marked feature of his character was his strong, robust common sense. His method of study seems to have been not to load his memory with a mass of isolated decisions, but to extract from each case the principle upon which it turned, and, by process of assimilation, to make it a part of his mental structure. His mind thus became a well-filled storehouse of the great rules and principles which lie at the foundation of the law, and he possessed a marked aptitude in applying them to new cases arising under the changing conditions of modern life.

When called upon to decide a case, the tendency of his mind was to inquire, not what have others decided, but what is just and right according to the eternal fitness of things. He had a clear perception of the right, an anxious desire to mete out justice without regard to persons, a sound and reliable judgment, and never failing promptness and industry in his work. Such qualities of character assured his success as a Justice of the Superior Court and of this Court.

We feel that by his death the community has lost a conscientious and useful judge, upon whom the people could safely rely to administer justice, -- a magistrate of whom all felt that "life, liberty, and property were safe in his hands."

We have lost more, -- a valued assistant, and a courteous and genial friend, whose companionship was always a pleasure.

Concurring in the sentiments of your memorial and resolution, we shall order that they, together with a memorandum of these proceedings, be entered upon the records of the Court.

The Court then adjourned.