The Massachusetts State Wildlife Action Plan, as required by Congress, presents the 570 Species of Greatest Conservation Need in the Commonwealth, the 24 types of habitat that support these species, and the actions necessary to conserve them.

The Massachusetts Division of Fisheries and Wildlife is pleased to present the 2015 update to the Massachusetts State Wildlife Action Plan, as required by Congress. This Plan presents the 570 Species of Greatest Conservation Need in the Commonwealth, the 24 types of habitat that support these species, and the actions necessary to conserve them. 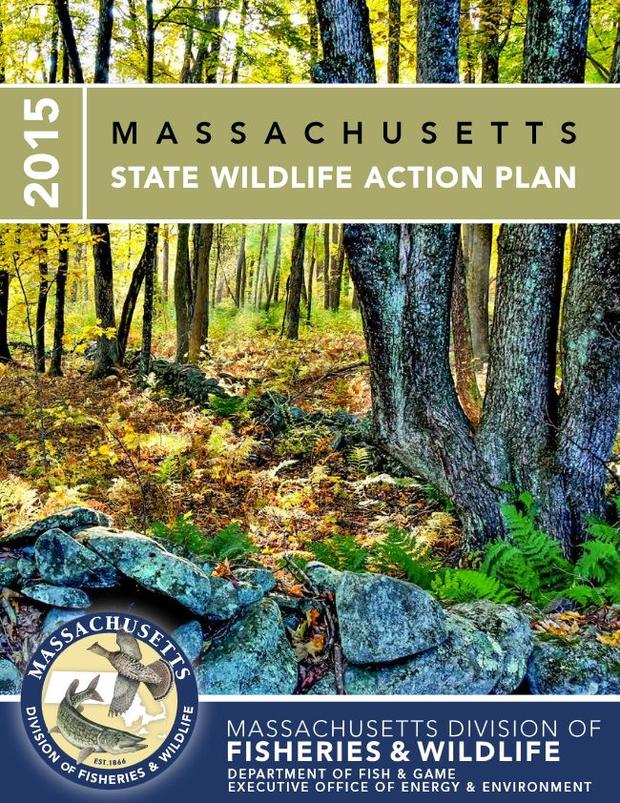 The citizens of Massachusetts have a long history of working together to conserve our state’s biodiversity. The state Fisheries Commission, the predecessor to the current Division, was permanently established almost 150 years ago, in 1886. The first land trust in the country was The Trustees of Reservations, still a highly successful force in Massachusetts conservation today. The Massachusetts Endangered Species Act, one of the strongest in the country, was enacted a quarter-century ago. Today, more than 25 % of the state’s acreage is protected from development, an astounding achievement in such a densely populated state.

With so much land protected, our focus going forward now moves to an equal emphasis on land acquisition and the management of these conserved lands. The Division itself has made a strong commitment to habitat management on our own 200,000 acres, particularly on the areas – the Key Sites – with the highest and best concentrations of rare species and other elements of biodiversity. As well, we intend to assist our dedicated conservation partners in determining appropriate habitat management on their own lands.

It is the continued, strong dedication of the Commonwealth’s citizens to our natural resources that has made these accomplishments possible, and it is in concert with our many conservation partners that we intend to move forward with the goals of this Plan.  We would like to thank everyone who submitted comments on the draft SWAP; your recommendations and suggestions were considered carefully and added considerably to the final version we submitted.

The Massachusetts Division of Fisheries and Wildlife submitted its State Wildlife Action Plan to the U.S. Fish and Wildlife Service on October 1, 2015. Below you will find the final, federally-approved Plan for Massachusetts.

The complete SWAP is close to 500 pages long; for ease in downloading, it is broken into chapters, as follows: