About the Bureau of Special Investigations - Fiscal Year 2019 Second Quarter

An overview of the responsibilities and activities of BSI in the second quarter of Fiscal Year 2019.
Skip table of contents

About the Bureau of Special Investigations

As a part of the Office of the State Auditor, the Bureau of Special Investigations (BSI) is charged with investigating allegations of public assistance fraud throughout the Commonwealth in order to make government work better. The diligent work of BSI fraud examiners ensures taxpayer dollars used to fund Massachusetts’ public benefits programs are managed effectively so that programs are available to residents who truly need them.

Under state law, BSI’s investigative authority extends to any assistance program administered by the Department of Transitional Assistance (DTA); the Department of Children and Families (DCF);1 and the Division of Medical Assistance, which administers MassHealth (the state’s Medicaid program). Although the Department of Early Education and Care (EEC) is not included in the BSI statute, BSI also works with EEC through a Memorandum of Understanding. As a result of BSI’s investigations, public assistance fraud cases are adjudicated in the following ways: cases are referred to agencies for administrative action, fraudulent overpayments are recovered through civil agreements, individuals are disqualified from programs for specified periods of time, and cases are prosecuted in state district or superior courts and the United States District Court for the District of Massachusetts. BSI recommends cases for prosecution based on the severity of fraud, the intent of the perpetrator, and the possibility for the case to serve as a deterrent to future fraud.

Working under Section 17 of Chapter 11 of the Massachusetts General Laws, BSI fraud examiners operate from five offices across the Commonwealth. BSI consists of four separate investigative units: the Central Processing Unit, the MassHealth Unit, the DTA Unit, and the Data Analytics Unit (DAU). An Assistant Director, who reports to the Director of BSI, heads each unit. While each unit has its own specific concentration, there is extensive cross-unit collaboration, and investigations often involve overlap. BSI also participates in joint investigations and task forces with other state and federal agencies that focus on combating fraudulent activities throughout the Commonwealth.

This report, as statutorily required, summarizes BSI’s work in the 2nd quarter of fiscal year 2019, during which BSI identified $2,940,235.34 in fraud. 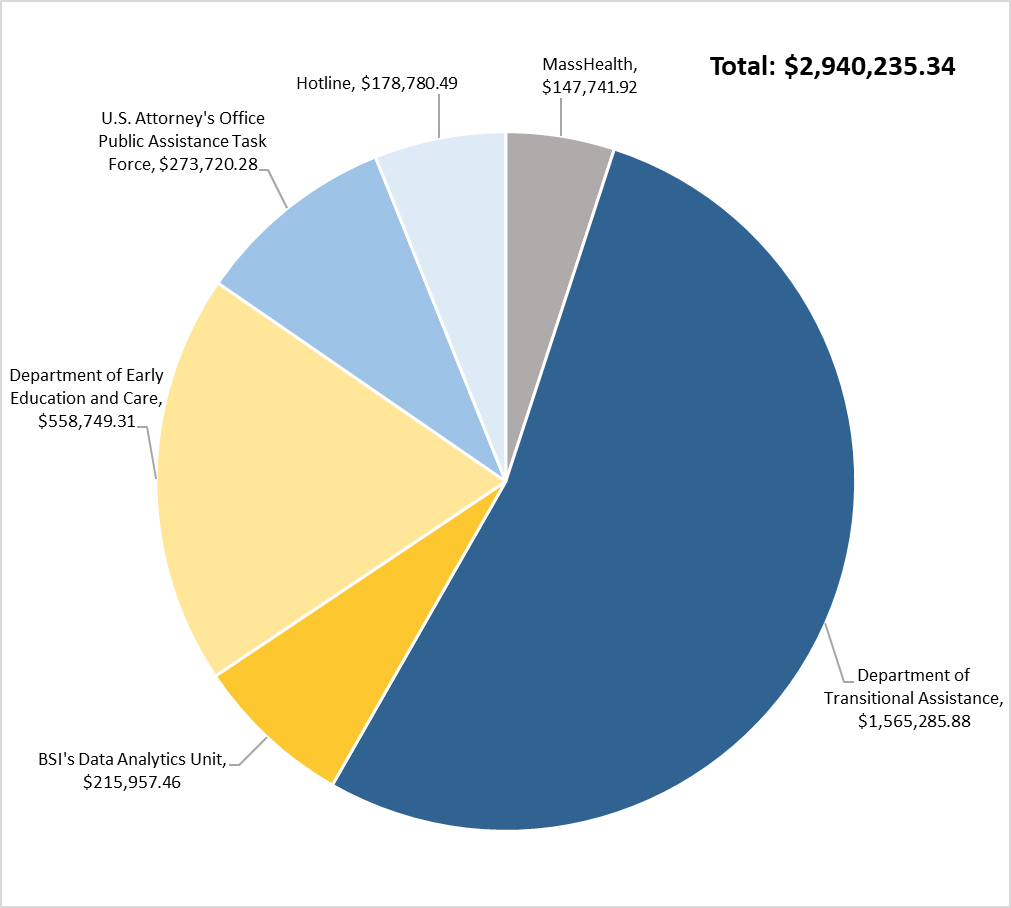 1. DCF does not administer public assistance funding and therefore does not fall within the scope of BSI’s investigative work.