This page, Arthur Sullivan, is offered by 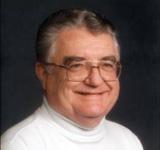 Arthur J.F. Sullivan, 79, was a husband, brother, son, soldier, father and teacher. He earned a living as an Industrial Engineer, but also taught at Northeastern University at night.

Arthur was also a devout Catholic, who practiced what the church preaches. Sharing his boisterous voice while reading scripture and also sharing that voice in praise in the church choir.

The oldest of 3 brothers, the father of 5 daughters and the grandfather of 7, he was an example of what the church preaches. He stood by and helped his wife of over 25 years, Helen through a fight against cancer, which she unfortunately lost in 1989.

Arthur went out of his way to help those in need and never gave up faith that he would be able to help those who have lost faith in themselves. When he remarried, he took in his stepson and then his 3 step granddaughters from Ecuador when their mother died of cancer and helped raise them along with his second wife Olga. He learned Spanish to communicate with the girls and make them feel at ease in a foreign country. The girls grew up to be fine women and move on with their education, lives and one to serve in the American Armed Forces.

Perhaps this is what led to his demise that fateful day the morning of February 26, 2007, his faith in people, when the person he was trying the most to help, his stepson, allegedly stabbed him to death as he slept in his bedroom in Arlington, MA.

Still we will not lose faith in the goodness of people, even in times of great darkness. There is a light in every person, sometimes it goes dim, but sometimes it shines as bright at the sun. We must foster that light; foster its growth by our own actions.

Dad, I carry your heart, I carry it in my heart.