Strategies for autumn turkey hunting are very different from hunting techniques used in the spring. Use the tips listed below to boost your chances for success this fall.

Whether you're a seasoned hunter or just getting started hunting turkeys, review turkey hunting safety information before each season.

Roosting a bird: Look for turkeys in agricultural fields, powerlines, and other open near the end of the day. Stay far enough away so you’re not spotted and watch where the turkeys enter the woods or fly into a tree just before dark. The next morning, set up at that location well before sunrise and use soft yelps or an adult hen assembly call once you hear or see the turkeys fly out of the trees for the day. (See calling section below for more about calls.)

“Busting” a fall flock: A method for fall turkey hunting is to “bust” a flock and scatter the birds. Anything that surprises the flock, including running towards them, will work to split up the group. Once the turkeys scatter, choose a location near where the flock split up, wait a few minutes and then begin to call. The turkeys will naturally start to regroup once they feel that danger has passed. Most hunters use a mouth call to make a “kee-kee” call. You can also try the assembly yelp of an adult hen. Once you get a response from a turkey, try to imitate the sound the bird is making.

Bowhunting for deer and turkey: Since archery turkey and deer hunting seasons overlap in the fall, deer hunters with a turkey permit and an archery stamp can pursue both species. Pursuing turkeys from a tree stand is quite different from traditional hunting methods, keep the following tips in mind while hunting from a stand in the fall.

During the fall, male turkeys form groups and separate groups of hens and their poults form as well. By this time of year, the poults may be just as large as the adult hens, so identification in the field can be difficult. However, all licensed hunters with a turkey permit may harvest one bird of either sex during the fall season.

Adult male turkeys are black or blackish-bronze with white wing bars, blackish-brown tail feathers, and a blueish-gray to red head. These “gobblers” weigh about 15–25 pounds. They typically sport a 6–10 inch hair-like “beard” which protrudes from the upper chest.

Females, or hens, are about 9–12 pounds, and are generally less conspicuous. Their heads are typically dull brown or blueish-gray. Although rare, female turkeys can have beard.

Identifying young turkeys born early in the spring can be tricky, as they will be about the same size as the adult hens, and mostly appear similar. Once harvested, sex can easily be identified by pulling a few feathers from the around the area of the breast. Hens will have a brown/buff colored tip while males will have a black lined tip. The wing tips of these juveniles will be very pointed and will not have complete barring on the end of the feather, compared to adult hens and gobblers that are worn down more and squared off, with barring that extends all the way to the end of the feather.

Wild turkeys are habitat generalists and thrive in a variety of environments in Massachusetts. They can be found in agricultural lands, in forests, but also in suburban and urban areas. Places with a mix of habitat types are the most productive for turkeys because they provide abundant food and cover throughout the year.

When looking for a place to hunt, focus your attention on areas with a combination of forested and open habitats like:

Tip: Ask your friends and family where they see turkeys while driving or walking. This can save countless hours of scouting! If you are tipped off to an area with turkeys, a quick look at an aerial map (using tools like the MassWildlife Lands Viewer, OnX, OLIVER, or Massachusetts Interactive Property Map) can reveal an adjacent woodlot, farm, or forest where you can hunt.

When you find an area to hunt, make sure to:

Once you have identified potential hunting locations, the next step is to scout those areas for turkey sign. Some locations attract turkeys year after year, but others are less predictable. Fall turkey hunting is a lot different than the spring season since the turkeys are not mating and therefor do not respond as well to the classic turkey calls. Successful fall hunting often requires more scouting to locate turkeys and pattern their movements. Read below for more tips for pre-season scouting.

Look: Bring binoculars when scouting and look carefully. This can often be done from your vehicle—taking a few Sunday drives can pay dividends when looking for turkeys. If possible, drive through some prospective areas on your way into work prior to the season, especially on rainy days when turkeys are likely be out in the open.

Find the roosting area: Once you locate a group of turkeys, try and find their roosting areas. On autumn mornings, once they fly down from their roost, turkeys gather and spend their day in large flocks. Many hunters will try to roost birds the evening before their hunt and then try to call them in when they come off roost. Turkeys are quite active in the early morning so it’s important to get close to a roost, but not too close when setting up to hunt. In the fall, toms and jakes don’t gobble much in the evening and hens call very softly, if at all, so hunters must rely on sight rather than sound to locate the birds.

Look for different turkey sign including scat, feathers, scratching in the leaf litter, dust bowls or turkey tracks in the mud or sand.

Sighting in your firearm and shot placement

Patterning your shotgun before the season is critical to determine which brand of ammunition and which shot size will work best for your firearm at various ranges. Different combinations of ammunition, firearms, and chokes will produce different patterns. Identify the maximum distance/range from which you can shoot that produces a clean pattern to ethically harvest a turkey. Click here for a complete guide on patterning your shotgun.

Note: To ethically harvest a turkey, aim for the head and neck. This ensures a quick clean kill and helps keep any pellets out of the meat. Sighting in your bow and shot placement

You must be proficient with your bow to ethically harvest an animal—this is especially true for turkeys whose vital area is small. Make sure you know your effective shooting range with the broadhead you plan to use. Some broadheads are designed for aiming/shooting at the turkey’s neck and head. These broadheads have a very limited range in which they fly accurately and are not meant for aiming at the body. Other fixed blade and mechanical broadheads can be used to aim at the neck/head or the vitals located in the body. These pictures depict the ideal shot placement locations. Get tips for bowhunting turkeys. 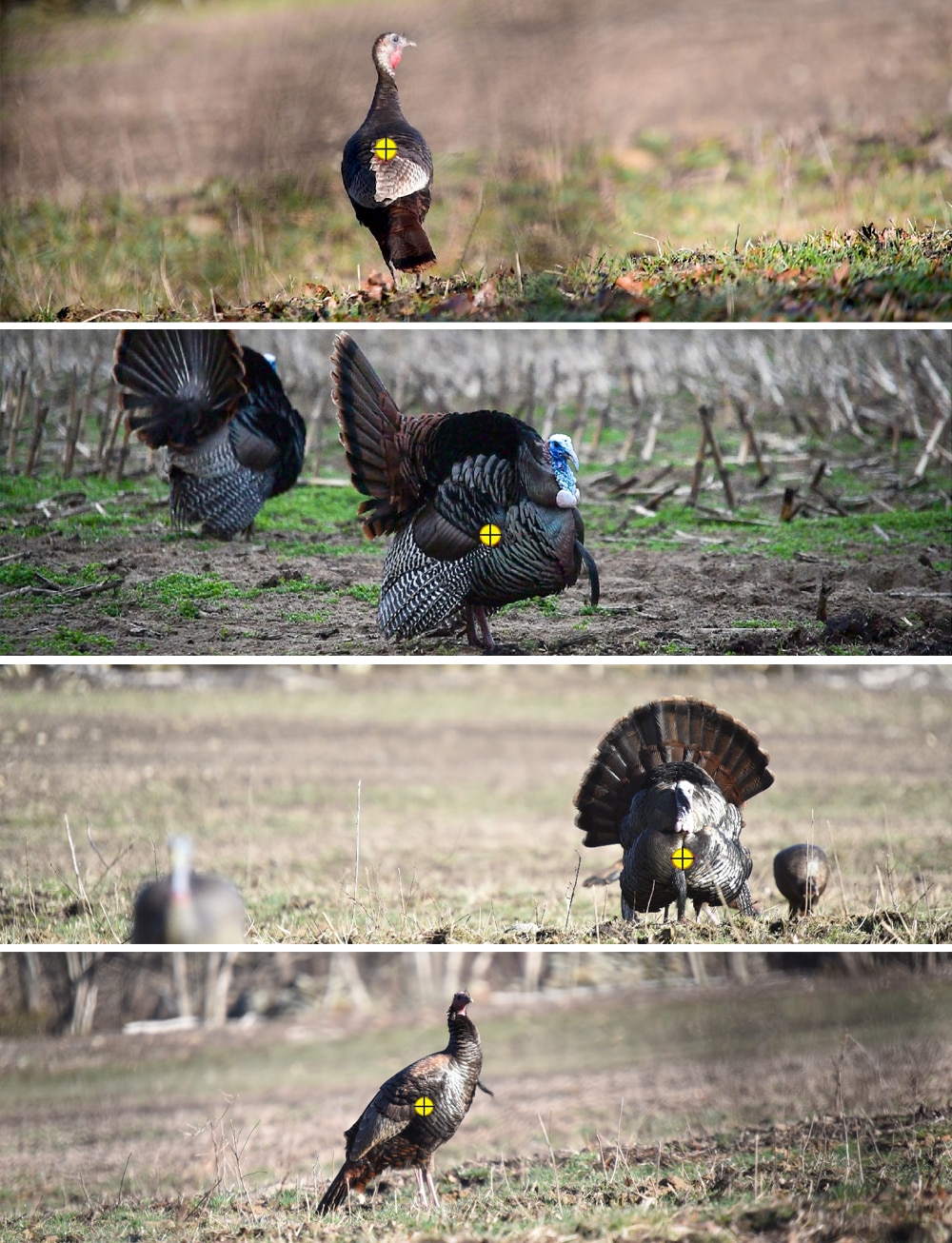 Turkey sounds and types of calls

In the fall, turkey hunters commonly break up a flock and then create turkey noises to reassemble the group. Below are the most common types of calls and sounds.