MWCC’s financial reports do not include the full cost of operating the Green Street Cafe and Mount Fitness Center.

Fringe benefits and indirect costs like maintenance were missing from MWCC's financial reports and do not provide a complete picture of the operations of these programs.
Skip table of contents

MWCC’s financial reports did not include fringe benefit costs3 or indirect costs, such as general operations, maintenance, depreciation, and administration expenditures, for the Green Street Cafe (GSC) and Mount Fitness Center (MFC). When we requested financial reports for these auxiliary services, MWCC provided quarterly trust fund reports, which do not include such costs.

The cafe and fitness center require MWCC to pay for their operations. Without financial reports that include all the costs associated with operating these auxiliary services, management cannot accurately assess the financial effect of these services on limited college financial resources and make fully informed management decisions, as discussed in Finding 3.

According to fourth-quarter trust fund reports provided to the board of trustees, GSC generated operating deficits of $48,393 and $32,163 and MFC generated operating deficits of $106,063 and $84,713 in fiscal years 2017 and 2018, respectively. However, these reports did not include fringe benefit costs for GSC and MFC employees. Using transaction activity reports from MWCC’s general ledger, we prepared income statements that included fringe benefit costs paid for GSC and MFC employees. The results for GSC and MFC are shown in the following graphs. 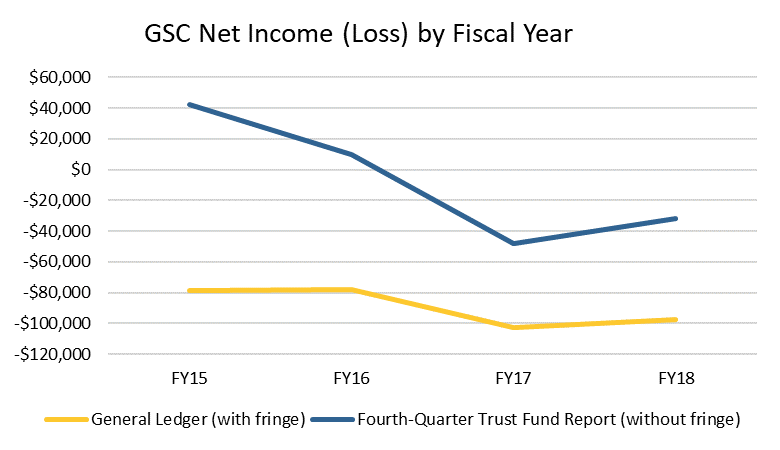 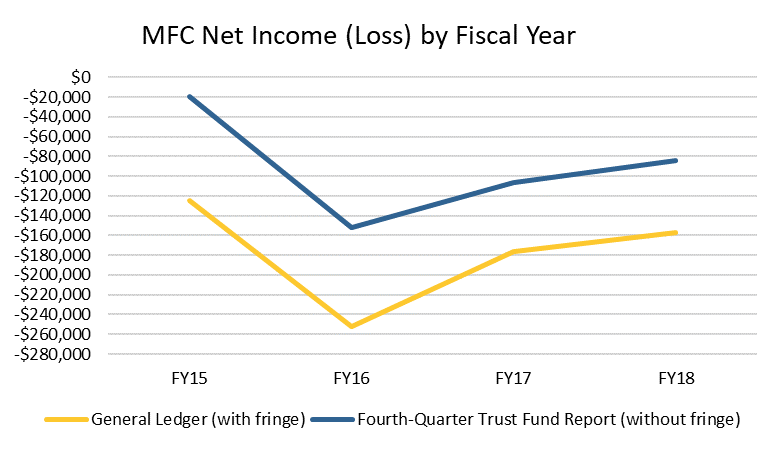 Neither the general ledger nor the quarterly trust fund reports include indirect costs. If MWCC had allocated indirect expenditures (i.e., performed full costing4 for GSC and MFC as well, net operating losses would be even higher.

According to the National Association of College and University Business Officers’ (NACUBO’s)5 Financial Accounting and Reporting Manual,

The distinguishing characteristic of an auxiliary enterprise is that it is managed as an essentially self-supporting activity. . . .

The auxiliary enterprise category [in financial statements] includes all expenses relating to the operation of auxiliary enterprises, including expenses for operation and maintenance . . ., depreciation (if allocated to functional expense categories) and administration. Also included are other direct and indirect costs, whether charged directly as expenses or allocated as a proportionate share of costs of other departments or units. To ensure that data regarding individual auxiliary enterprises are complete and adequate for management decisions, cost data should be prepared using full costing methods.

Although MWCC is not required to follow NACUBO standards, we consider them best practices for higher-education institutions.

MWCC management presents the board of trustees with quarterly trust fund reports that include a breakdown of the financial performance of both GSC and MFC. Only expenses paid with MWCC trust funds are included in these reports. Fringe benefit costs associated with GSC and MFC employees are excluded. Although periodic departmental financial performance reports that include all expenditures recorded by MWCC are available at the request of members of the board of trustees, these reports are not distributed to the board.

Furthermore, MWCC indicated that peer institutions in the Commonwealth do not allocate indirect costs for similar services.

The quarterly trust fund reports provided to the Board of Trustees have been designed (based on feedback from the Trustees) to provide a summary level of reporting which is appropriate to their oversight needs. The College has various other reports and reporting tools available that are used to assess the performance of the GSC and MFC. These reports would include a full costing for those activities.

Because the report produced for the Trustees is a report of trust fund activity, it would not be appropriate to include non–trust fund expenditures within the individual trust funds. In an effort to comply with the Auditors’ recommendation and present the Board with a clearer understanding of the impact of these operations, the College will add information regarding salaries and fringe related to these operations within the notes.

When we asked for operating performance reports for GSC and MFC, MWCC provided us with quarterly trust fund reports. As noted above, these reports omit fringe benefit costs attributed to employees working at these facilities. To gain an accurate understanding of the operating performance of these auxiliary services, those charged with governance (the board of trustees) must understand the full cost of operating the services to make strategic decisions that protect the college’s limited resources.

3. Salaries paid to Commonwealth employees who receive benefits are subject to a payroll fringe rate to cover health insurance, retirement, and terminal leave costs, which are considered fringe benefits. For fiscal years 2018 and 2019, the Commonwealth’s fringe rates were 34.86% and 34.89% of employees’ salaries, respectively.

5. NACUBO is a membership organization that includes more than 1,900 colleges and universities in the United States and works to promote and support economically sound business practices for higher-education institutions.