This section describes the makeup and responsibilities of the Office of Medicaid (MassHealth)—Review of Counseling Provided to MassHealth Members Receiving Medication-Assisted Treatment for Opioid Use Disorders.
Skip table of contents

Under Chapter 118E of the Massachusetts General Laws, the Executive Office of Health and Human Services is responsible for administering the state’s Medicaid program, known as MassHealth. Through its behavioral health programs, MassHealth provides treatment and medications to help members recover from opioid use disorders. The services provided include, among other things, coverage for medications; inpatient and outpatient treatment programs; and opioid use disorder counseling in individual, group, and family/couple settings.

The table below provides details of all buprenorphine prescriptions provided to MassHealth members from January 1, 2011 through August 16, 2017.

Opioids and Opioid Use Disorders

The term “opioid” refers to a family of natural and synthetic substances that includes heroin, morphine, codeine, fentanyl, and oxycodone. Many opioids are prescribed for legitimate medical uses, such as relieving pain, but they are also misused for recreation. The mass.gov webpage “The Massachusetts Opioid Epidemic: A Data Visualization of Findings from the Chapter 55 Report”2states that ingesting opioids, for legitimate reasons or recreationally, can lead to opioid use disorders. It also states,

Addiction to opioids can put people at greater risk for infectious diseases like HIV or hepatitis, deteriorating conditions like cirrhosis or cognitive decline, family disruption like domestic violence or child abuse, job loss, exposure to criminal behavior, overdose, and death.

According to some medical professionals, society also stigmatizes opioid use disorders. For example, the 2016 report Facing Addiction in America: The [US] Surgeon General’s Report on Alcohol, Drugs, and Health states,

We also need a cultural shift in how we think about addiction. For far too long, too many in our country have viewed addiction as a moral failing. This unfortunate stigma has created an added burden of shame that has made people with substance use disorders less likely to come forward and seek help. It has also made it more challenging to marshal the necessary investments in prevention and treatment. 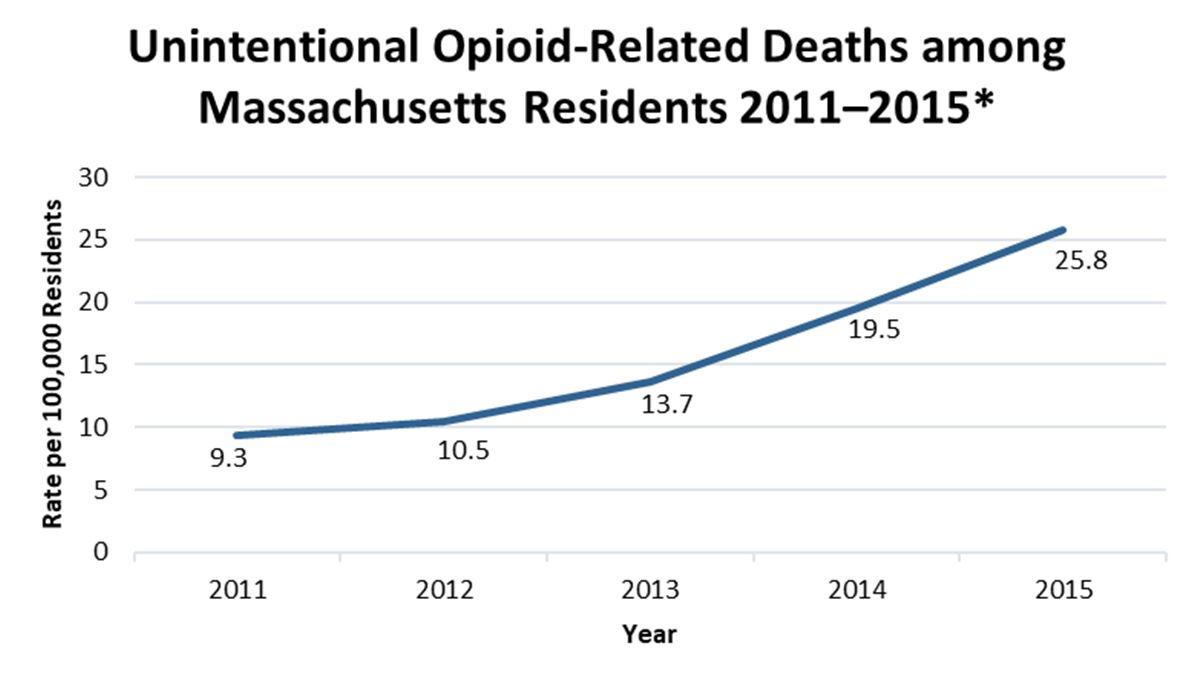 *     Figures include deaths, excluding suicides, that are confirmed or suspected to be related to opioids. Source: DPH data brief Opioid-Related Overdose Deaths among Massachusetts Residents.

According to the federal Substance Abuse and Mental Health Services Administration (SAMHSA), medication-assisted treatment (MAT) for opioid use disorders consists of a combination of prescription medication and outpatient opioid use disorder counseling to provide patients with behavioral coping skills to treat their disorders. Treatment strategies can vary widely depending on the patient. According to SAMHSA’s website, programs, and campaigns, as well as the Chapter 55 report, some patients require long-term monitoring and intervention in a formal healthcare setting, and others may be able to achieve stability on their own or through self-help groups.

According to SAMHSA, the American Society of Addiction Medicine (ASAM), the National Institute of Drug Addiction, and healthcare professionals with whom we spoke who have been trained in treating opioid use disorders, patients who require medication to treat such disorders usually receive either buprenorphine or methadone. Patients who receive methadone typically obtain daily doses along with mandatory counseling on site at a federally regulated opioid treatment program, frequently referred to as a methadone clinic. Patients receiving buprenorphine obtain a prescription for buprenorphine and ingest the medication at home. New patients visit buprenorphine prescribers frequently, but visits become less frequent (typically once per month) as the patients stabilize. Buprenorphine patients can receive prescriptions from a variety of healthcare providers, ranging from individual family practitioners to healthcare providers in clinics or large academic hospitals who have been specifically trained in treating opioid use disorders. SAMHSA encourages buprenorphine prescribers to ensure that patients also receive opioid use disorder counseling as a best practice.

The primary goal of opioid use disorder treatment is to counteract the disruptive effects of these disorders. Successful treatment enables patients to reestablish productive living situations in their families, workplaces, and communities.

Two major authorities on treating opioid use disorders, ASAM and SAMHSA, recommend counseling in conjunction with any pharmacological treatment of opioid use disorders and believe that the combination of medication and counseling is the most effective approach to treating patients. Additionally, various SAMHSA Treatment Improvement Protocols5 and a study by the US Surgeon General have reported the effectiveness of individual opioid use disorder counseling and generally support its use as an effective intervention for patients with such disorders. In fact, Section 823 of Title 21 of the US Code requires physicians to be able to refer patients to appropriate counseling before they are allowed to prescribe buprenorphine.

Opioid use disorder counseling may be delivered in many different forms depending on a person’s needs. For example, it may consist of individual or group sessions, self-help programs, or meetings with peer recovery coaches. Opioid use disorder counseling is delivered by a wide range of professionals, including physicians, clinical psychologists, clinical social workers, nurse practitioners, clinical nurse specialists, and physician assistants. It may include cognitive behavioral therapy, motivational enhancement therapy, patient education, and/or prevention education.

Approved by the federal Food and Drug Administration in 2002 for opioid use disorder treatment, buprenorphine is a partial opioid agonist that can activate the various opioid receptors in the brain to allow for some opioid effect, but less of an effect than a full agonist, such as heroin, has. This helps reduce symptoms of opioid withdrawal and cravings. Sometimes buprenorphine is combined with naloxone, which binds to opioid receptors and can fully block the effect of other opioids, to prevent misuse of buprenorphine. Buprenorphine is available in both tablet and sublingual (under the tongue) film form.

Practitioners must be certified by the federal Drug Enforcement Agency before they can prescribe buprenorphine to MassHealth members.

2.   Chapter 55 of the Acts of 2015 was passed by the Legislature and signed into law in August 2015. This law permits the use of data to perform trend analysis and issue a report, referred to as the Chapter 55 report, on opioid use in the Commonwealth. The report is a compilation of information provided by 29 Massachusetts entities, including academic institutions, private institutions, and governmental units, providing information on trends and issues related to the opioid epidemic in the Commonwealth.

3.    Massachusetts established the Health Policy Commission as part of Chapter 224 of the Acts of 2012. The commission is responsible for monitoring healthcare spending growth of both public and private insurers and healthcare organizations in Massachusetts and for promoting transparency, accountability, and ways to control increases in healthcare costs.

4.    Figures include deaths that are confirmed or suspected to be related to opioids.