The Big Dig: tunnels and bridges

The Central Artery/Tunnel Project opened three major highway tunnels and an innovative river crossing. Descriptions of the major underground features of the highway system and the crossings are below.
Skip table of contents

The Ted Williams Tunnel (TWT) beneath Boston Harbor was the first completed milestone of the Central Artery/Tunnel Project. It opened on schedule and within its $1.3 billion budget on December 15, 1995.

The .75-mile underwater part of the 1.6 mile tunnel used a dozen steel tube sections, each longer than a football field. These were placed into a trench on the Boston Harbor floor and were then connected.

The Massachusetts Turnpike (I-90) Extension opened to traffic on January 18, 2003. Now, I-90 runs from Seattle, Washington to Logan International Airport in East Boston. In Massachusetts, the MassPike now runs 138 miles from the New York border to Route 1A in East Boston.

As a result of the extension completion, the MassPike now runs through to the Ted Williams Tunnel. Motorists from south and west of Boston now have direct access to Logan Airport and Massachusetts' North Shore via I-90 eastbound.

This direct, 3.5 mile route to the airport saves drivers as much as 45 minutes off the previous route.

The new I-90 interchange in South Boston also provides direct access to the center of a vital new development area, the Boston seaport. This area features the new Massachusetts Convention Center.

The construction of the I-90 Extension involved some of the most complicated engineering. It required tunnel jacking, constructing a casting basin for immersed tube tunneling, and cut-and-cover tunnel construction. 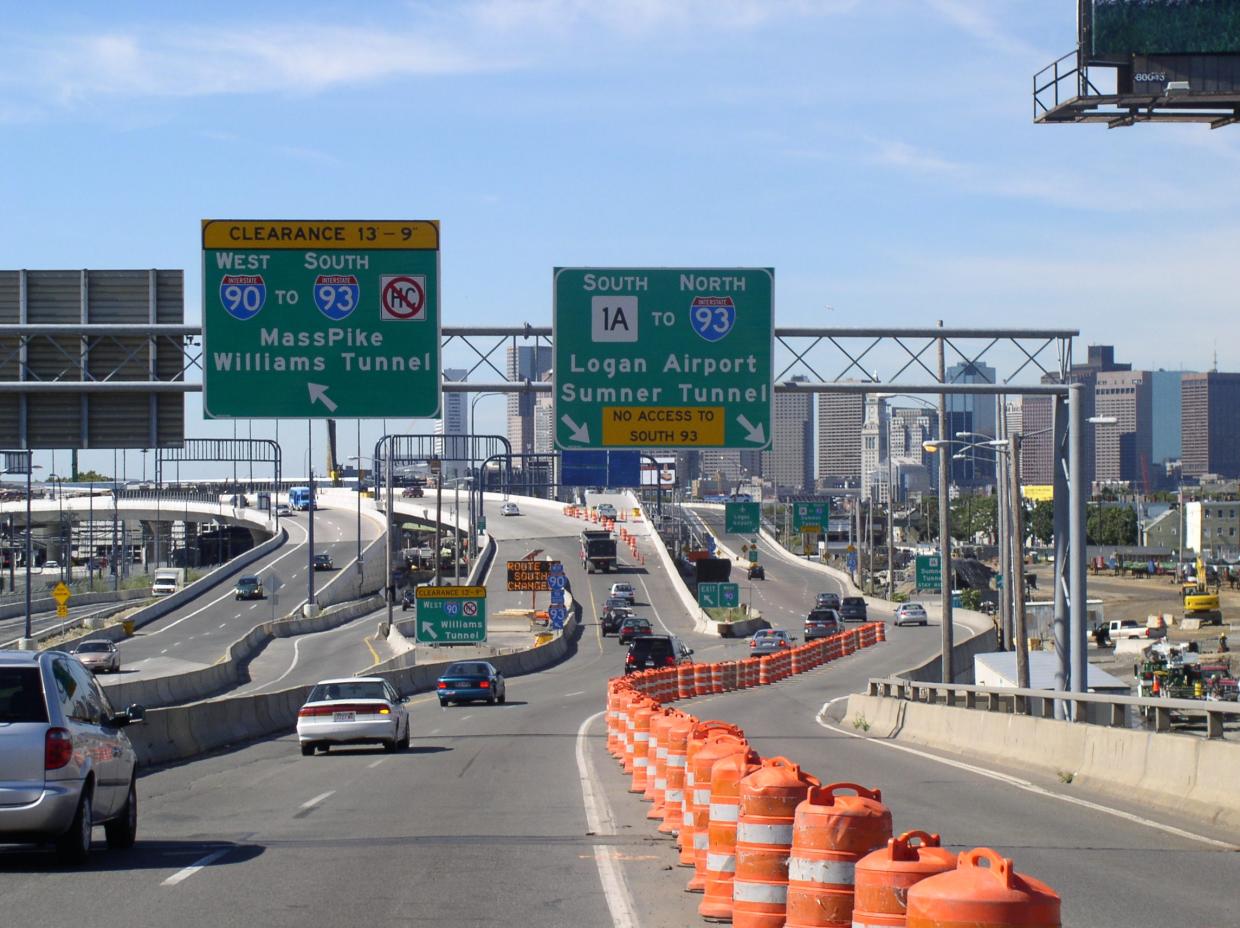 The Thomas P. O'Neill, Jr. Tunnel (I-93 tunnels) is 1.5 miles of underground roadway. From Kneeland Street to Causeway Street it connects to the Leonard P. Zakim Bunker Hill Bridge. This tunnel opened in 2003. The northbound side opened to traffic on March 29 and the southbound side opened on December 20.

The reconstruction of I-93 through downtown Boston was very complex. Before heavy construction began, utility relocation and mitigation measures were undertaken. Slurry wall construction began in the mid-1990s. This required underpinning of the existing elevated Central Artery before excavation.

Once I-93 North opened under the old Central Artery, Big Dig crews began demolishing the aging elevated highway. That work finished in 2004 when all traffic shifted underground and the Artery became devoid of vehicles for the first time in 50 years.

The Thomas P. O'Neill, Jr. Tunnel surfaces near the TD Garden at Causeway Street. It then crosses the Charles River on an elegant 10-lane, cable-stayed bridge. The bridge, called the Leonard P. Zakim Bunker Hill Bridge, is the widest cable-stayed bridge in the world. It is the first in the United States with an asymmetrical, hybrid design. The bridge opened in stages. Four lanes of I-93 Northbound opened to traffic in March 2003. Four lanes of I-93 Southbound opened in December 2003. The remaining two lanes opened in early 2005. Even before it opened, the bridge became known as a spectacular new landmark gateway to downtown Boston.

The Leonard P. Zakim Bunker Hill Bridge replaced a deteriorating six lane double-deck bridge demolished in spring 2004. The CA/T Project also constructed a parallel four-lane bridge. The Leverett Circle Connector Bridge carries traffic to and from Storrow Drive and Leverett Circle. This opened to traffic in October 1999. Together, these bridges more than doubled the cross-river capacity to 14 lanes.

As part of the bridge construction, the CA/T Project developed 40 acres of new park land on the riverbanks below. This helped revive an area long abandoned under the shadow of the upper and lower deck.

The Leonard P. Zakim Bunker Hill Bridge fuses Boston's future with its historic past. Swiss bridge designer Christian Menn conceived the bridge with inverted Y-shaped towers. This is in reference to the shape of the Bunker Hill Monument in neighboring Charlestown. Along with the Battle of Bunker Hill, the bridge is also dedicated to the life of civil rights activist Lenny Zakim. It serves as a permanent memorial to a man who bridged many gaps. The bridge's cables -- which suggest a ship in full sail -- also evoke the history of East Boston as a center of shipbuilding. (Learn more about Leonard P. Zakim and The Battle of Bunker Hill.)

The bridge, at 1,432 feet long, emerges from the underground Central Artery near the TD Garden at Causeway Street. It then crosses the river to make connections with both I-93 and Route 1. The bridge carries 10 lanes of traffic; eight lanes passing through the legs of the twin towers and two cantilevered on the east side. The cantilevered part accommodates northbound traffic from the Sumner Tunnel and the North End. It also provides the bridge's unique, asymmetrical design.

Girders, floor beams, and two planes of cables support the bridge's 745-foot-long, 183-foot-wide main span. Steel floor beams, which support the main span, are extended out to support the cantilevered lanes. The back spans on the land side of the towers measure 267 feet on the downtown side, and 420 feet on the Charlestown side. Single planes of cables support these spans. Using this design on the back span allowed southbound traffic to use the existing connection to Leverett Circle during construction. 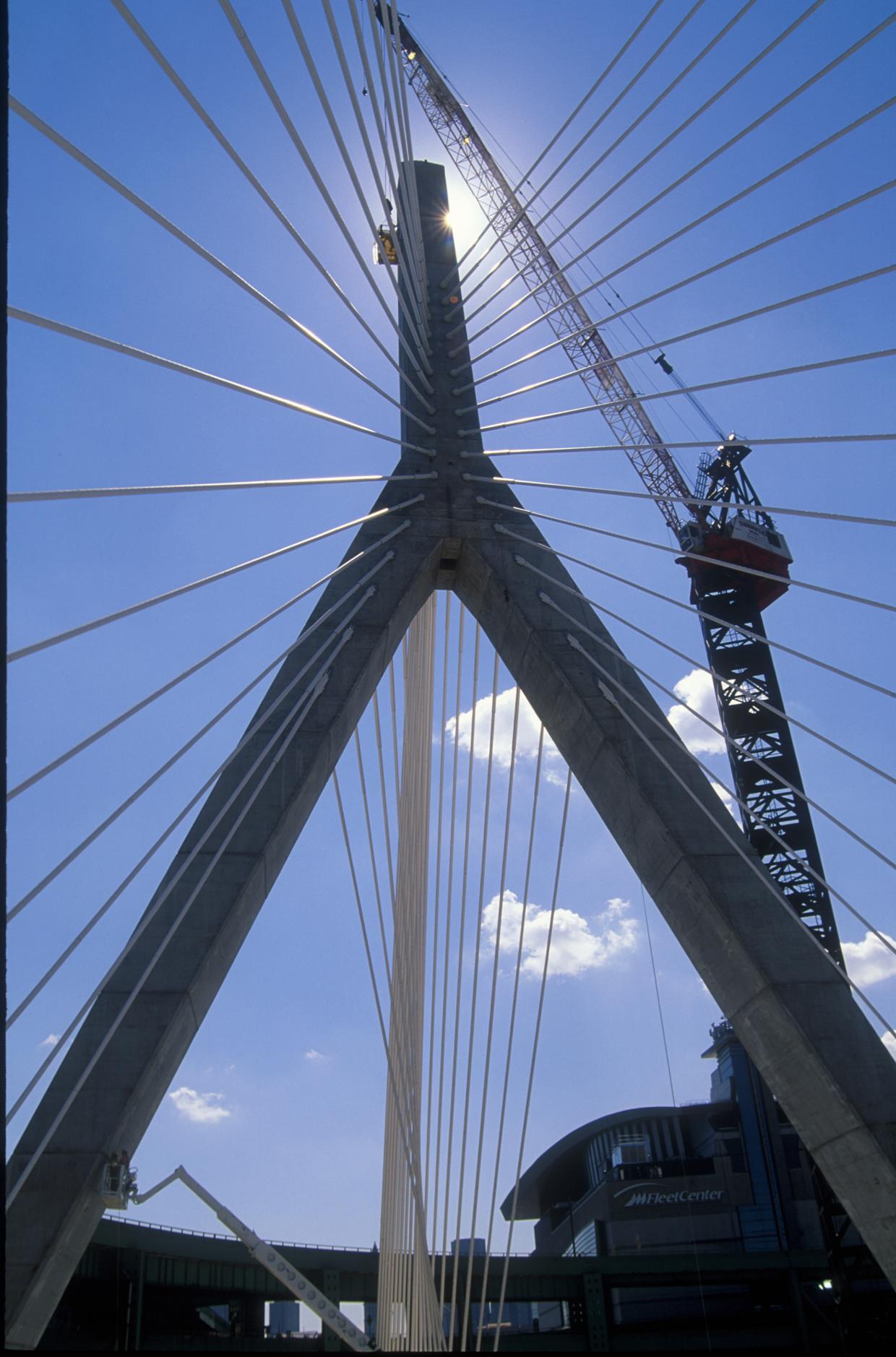 One of a Kind

The new Leonard P. Zakim Bunker Hill Bridge is the only one of its kind ever built. In addition to being the widest cable-stayed bridge in the world, the bridge is the first "hybrid" cable-stayed bridge in the United States, using both steel and concrete in its frame. The main span consists of a steel box girder and steel floor beams, while the back spans contain post-tensioned concrete.

The bridges were built within a busy transportation corridor that already houses the Massachusetts Bay Transit Authority's (MBTA) Commuter Rail and Orange Line. To avoid impact to the Orange Line and its ventilation building, the legs of the bridge's concrete towers are truncated at a 55-degree angle and straddle the MBTA tracks as they surface from the Orange Line tunnel in Charlestown.

This 830-foot-long, four-lane companion to the ten-lane cable-stayed bridge connects the Leverett Circle area on the northwestern edge of downtown Boston with points north of the Charles River. Nine box girder sections - in cross-section the largest in North America - were barged into place and raised into place by cranes or (in the main span) jacks. The Leverett Circle Connector bridge opened to traffic eight days ahead of schedule in October 1999.

For a great view of the bridges, go to either the Charles River locks near Lovejoy Wharf, or the end of the rail platforms at North Station.

Thanks, your message has been sent to the Massachusetts Department of Transportation!