The steady expansion of MassWildlife's Prescribed Fire Program has a direct benefit to wildlife of Massachusetts.

It's been a great year for wildlife and plants that rely on fire-adapted habitats. Why is that? Because MassWildlife, with help from many partners, has already conducted 21 prescribed fires on more than 900 acres of public land this spring. Prescribed fires are carefully planned and carried out to restore dwindling habitats that support declining wildlife. Over several decades, MassWildlife has built its prescribed fire program to a level that is having a major benefit to fire-influenced landscapes.

Fire is not new on the landscape; for thousands of years indigenous peoples burned the same lands MassWildlife now targets for prescribed fire. Fire suppression became common beginning in the 1920s. By the 1980s, fire exclusion had begun to fundamentally alter many natural landscapes in Massachusetts. Open habitats like grasslands and woodlands were disappearing along with the wildlife that relied on them. Once ecologists, land managers, and wildlife biologists started to understand the damage fire exclusion was having on some ecosystems, they began to reintroduce fire through prescribed burning.

From the start, application of prescribed fire in Massachusetts has been made possible by strong partnerships. In the mid-1980s, ecologists and biologists from UMass Amherst, Mass Audubon, The Nature Conservancy, National Park Service, The Trustees, Department of Conservation and Recreation (DCR), and MassWildlife started using prescribed fire to manage and improve priority grasslands and barrens habitat around the Quabbin Reservoir and Southeast Massachusetts including Plymouth, Cape Cod, and the Islands. The first prescribed burn on a MassWildlife Wildlife Management Area (WMA) took place in 1989 at Hiram Fox WMA in Chester.

Since that first prescribed burn, MassWildlife has steadily worked to increase staff skills, strengthen partnerships, and solidify policies—all with the goal of improving and restoring fire-influenced habitats important for wildlife. The program grew throughout the 1990s and early 2000s and focused on reintroducing fire into pine barrens and grasslands in Edgartown, Falmouth, Mashpee, and Montague. As the agency took on more restoration projects across the state, the prescribed fire program grew and over the last decade, the program has taken big steps forward.

The steady, purposeful expansion of the prescribed fire program has a direct impact the wildlife of Massachusetts. This increase in prescribed fire activity improves habitat for more common wildlife such as American woodcock and ruffed grouse, but also for many rare and declining plants and animals, such as eastern whip-poor-will, grasshopper sparrow, federally and state rare plants, and numerous butterflies, moths, and native bees. 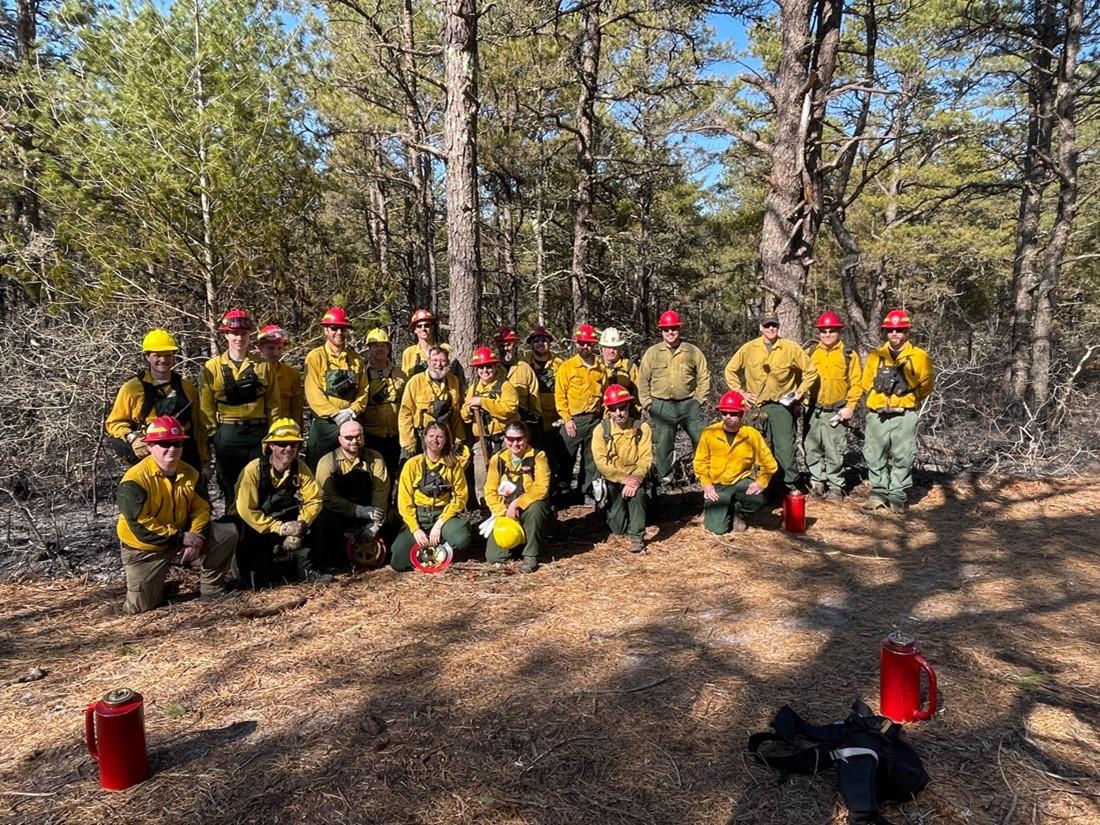 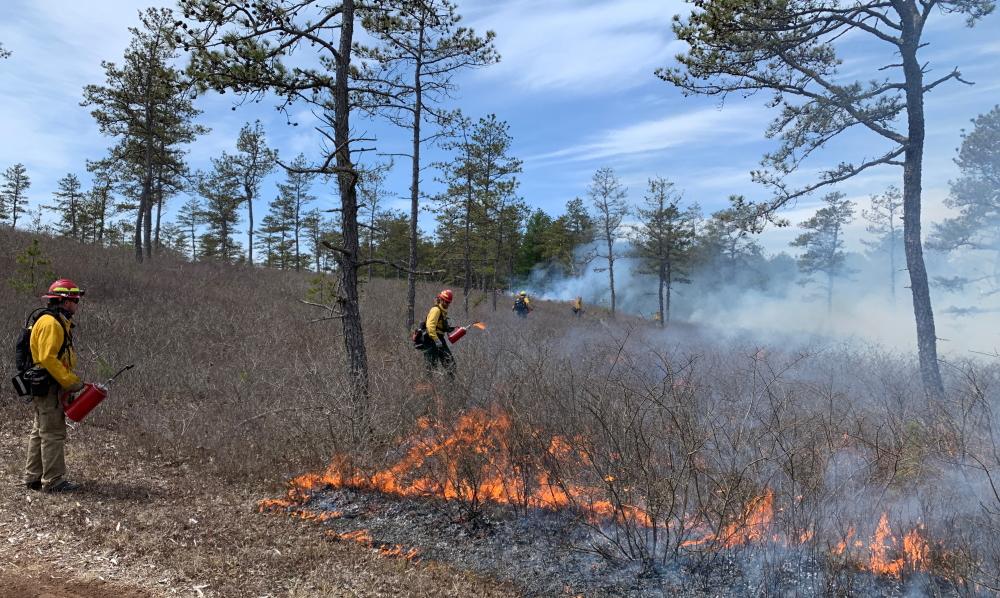 MassWildlife works alongside staff from Plymouth Fire Department, Mass DCR Fire Control, and Rhode Island Department of Environmental Management at the Southeast Pine Barrens WMA in 2022. In recent years, MassWildlife and partners have been able to target an increasing diversity of fire-adapted habitats including grasslands, heathlands, woodlands, and barrens (pictured here).