Art and conservation combine to raise public awareness of rare wildlife and benefit a pair of resident peregrine falcons in Worcester.

A new peregrine falcon mural was recently unveiled in downtown Worcester, alongside a new nesting box for a pair of resident falcons. We may not think of cities as a place for wildlife, especially rare species, but appearances can be deceiving. A few Massachusetts cities are currently home to peregrine falcons, a rare bird that at one time had vanished from the eastern United States. Peregrines, known as the fastest animal on the planet, have lived in Worcester since 2000. With an abundant bird population, the falcons’ main source of food, the city is a perfect home for these super-fast birds of prey. Through efforts by MassWildlife and other partners, this bird is considered a conservation success story.

Visitors can enjoy the new mural at 2 Mercantile Street in Worcester, and peregrine falcons will enjoy a new nesting box installed by MassWildlife nearby at 120 Front Street. “Our ultimate hope is the Mercantile Center Peregrine Falcon Mural and Nest Box project raise awareness and appreciation for the wildlife, particularly the rare wild neighbors in our cities and town,” said Chip Norton, Managing Director of Mercantile Center. “We have had numerous previous peregrine falcon nesting attempts at Mercantile Center and therefore partnered with MassWildlife to provide assistance. Those attempts and our new nest box inspired our Peregrine Falcon mural that was recently completed by local artist Sophy Tuttle. We were delighted to have commissioned Sophy to create this unique mural in downtown Worcester and to partner with MassWildlife on the peregrine falcon nesting box.”

Local artist Sophy Tuttle of Medford created the new peregrine falcon mural. Through her art, Sophy enjoys introducing human neighbors to their urban, wild neighbors. Sophy was inspired by researching the local flora and fauna of the City of Worcester. She learned falcons in the city were spending time specifically on or around this wall at Mercantile Center and thought they were the perfect subjects for this mural. “I wanted this mural to embody the spirit of the peregrine falcon. I hope the community will enjoy it and be encouraged to learn about urban wildlife and begin conversations within the community about environmental issues,” Tuttle said.

Working with Mercantile Center, MassWildlife staff recently installed a falcon nesting box at 120 Front Street, hoping that the current peregrine pair will use the box next spring and into the future. The simple wooden box provides the adults and chicks protection from the elements and predators. The box floor is lined with gravel, material falcons prefer for laying and incubating eggs and an attached wooden dowel provides a convenient perch.

The first Worcester nest in 2000 was at 120 Front Street on an 8th floor balcony in a pine bark and soil-filled planter. Since then, falcons have nested or attempted to nest at One Chestnut Place, 100 Front Street, the Bancroft and Denholm Buildings. In 2020, MassWildlife learned of an unsuccessful nesting attempt on 100 Front Street. The pair then shifted over to the Denholm Building in 2020. This year, 2021, the pair hatched and raised one fledgling chick.

Whenever possible, MassWildlife biologists place a metal ID leg band on falcon chicks to track reproduction, travel movement, and life span. Since 2000, 29 chicks successfully fledged from Worcester nests with 26 chicks banded. The female of the current adult pair is from a Worcester nest sporting band #96/AD that was attached by MassWildlife in 2013. The adult male is not banded.

“MassWildlife’s ability to collaborate with seemingly unlikely conservation partners, such as managers of tall, modern structures, has aided in the successful recovery of peregrine falcon here in Massachusetts,” said Dave Paulson, MassWildlife Senior Endangered Species Review Biologist. “Nest box sites like the one at 120 Front Street is a great way to educate and connect with the community about species conservation and how we all can make a difference. We are fortunate and grateful to partner, through the connection of art and science, with Mercantile Center on this particularly creative conservation initiative.” Paulson noted that he is actively seeking volunteers who would be willing to help MassWildlife monitor the Worcester pair’s activities beginning in 2022. 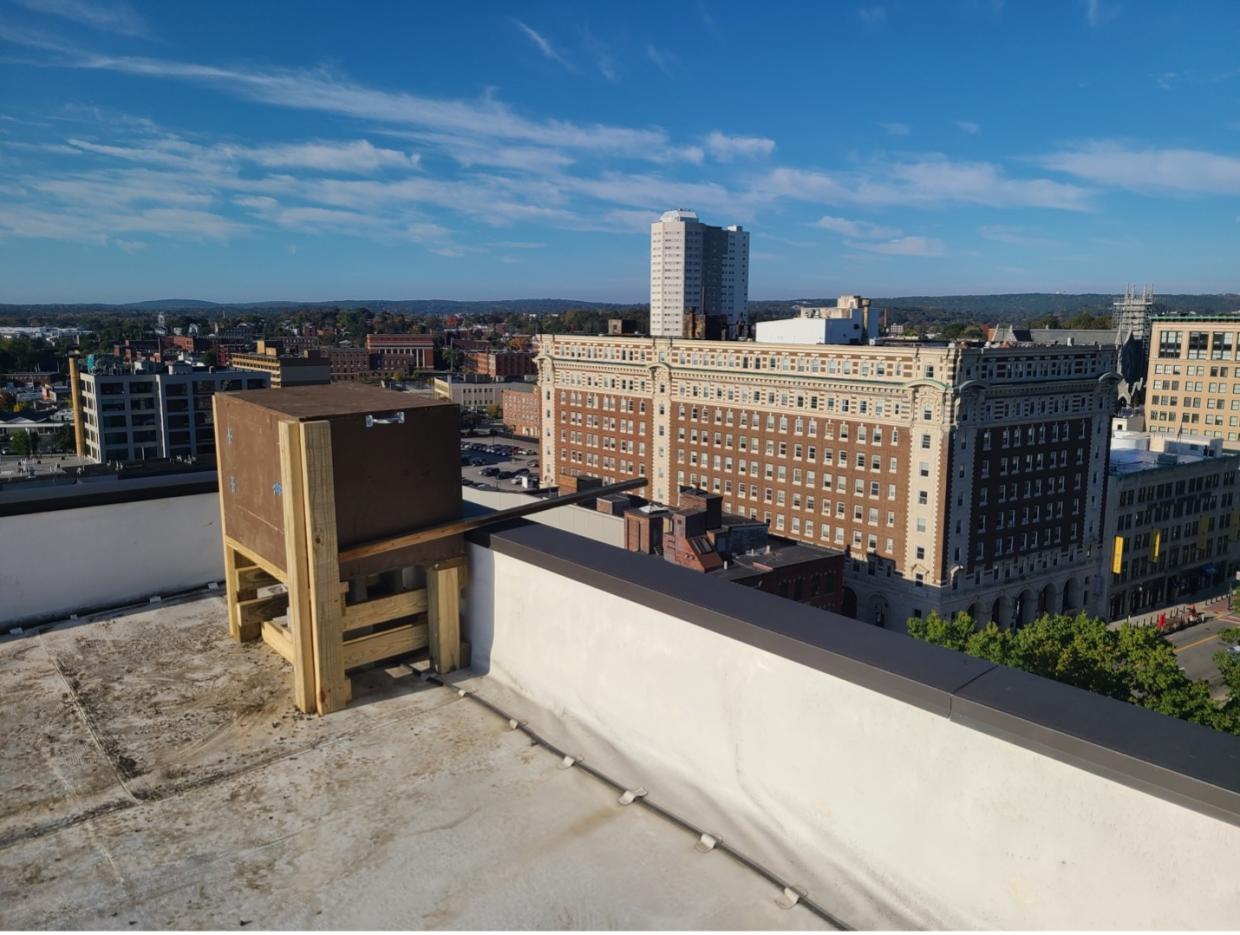 Diving from great heights to strike prey, the peregrine can reach speeds of over 240 miles per hour. It is regarded by falconers and biologists alike as one of the noblest and most spectacular of all birds of prey. Peregrines are found on six continents and distributed across the United States. In the mid-20th century, peregrine falcons began to decline and eventually disappear throughout much of its range due to the effects of the pesticide DDT. Accumulation of DDT caused falcons and other raptors to lay thin-shelled eggs that broke under the weight of incubating birds. The last nesting falcon pair in Massachusetts was in 1955 on Monument Mountain. The peregrine falcon was federally listed as Endangered in 1969 under the Endangered Species Conservation Act and in Massachusetts was listed under the MA Endangered Species Act (MESA) in 1984.

Restoration efforts in the United States began in 1972, coinciding with the ban on DDT use in the country. Historically, peregrine falcons nesting sites were located on rocky cliffs. Now, due to successful restoration efforts focusing on urban centers, peregrines nest most frequently on tall structures like buildings, bridges, and cell towers. Here in Massachusetts, young falcons were released in downtown Boston in 1984 and 1985, resulting in the first modern Massachusetts nest in 1987. Peregrine populations have experienced a positive upward growth trend in Massachusetts and throughout North America. The year 2021, marks the 35th year peregrine falcons have raised young in Massachusetts. During these 35 years, at least 875 wild-born chicks are known to have hatched and fledged (flown) from their nests. In 1999, peregrine falcons were removed from the Federal Endangered Species List. In 2019, MassWildlife upgraded the MESA status of this bird from threatened to special concern reflecting the bird’s increased population and distribution across the state. At least 42 territorial pairs nested in 2021. Fast Facts on Peregrine Falcons.