Paul Hostovsky currently works as a freelance sign language interpreter in private practice and as a Braille instructor on contract with the Massachusetts Commission for the Blind. He was a staff interpreter at the Massachusetts Commission for the Deaf and Hard of Hearing from 1998 to 2018. Over the years, he has also worked as a Braille transcriber at the National Braille Press, a coordinator of Deaf and Hard of Hearing support services at Boston University, and as executive director of Deaf-Blind Contact Center. Paul is also a poet, and his poems have won a Pushcart Prize, two Best of the Net Awards, and the FutureCycle Poetry Book Prize. He has published twelve books, including, most recently, Deaf & Blind, a collection of stories, essays, and poems about ASL and Braille, Deaf and DeafBlind people. For more information, visit his website: www.paulhostovsky.com

Tell us a little more about yourself--Where are you from? Where did you go to school?

I’m from New Jersey. And I’m from two Jewish parents who came to this country as exiles--my mother from Germany, my father from Czechoslovakia. They both fled the Holocaust and met in New York City after WWII. My father was a writer, a novelist, and my mother was a reader, I guess you could say, and that’s how they met: she read some of his novels, was impressed by them, and more than a little intrigued, and a mutual friend arranged a meeting, and one thing led to another. And then I came along. Growing up, I heard a lot of different languages being spoken in the home: Czech, German, Yiddish, and French--my mother worked as a high-school French teacher. I went to Bard College, majored in English and minored in French and German.

After college, I moved to Boston, and it was here, on a lark, that I took an introductory course in American Sign Language at Northeastern University. And I was immediately hooked! I continued studying ASL for many years, and eventually became an ASL interpreter. And I guess you could say that I’m still studying ASL--even though I now make my living by it--because it takes a lifetime--more than a lifetime--for a second-language learner to achieve real native fluency. 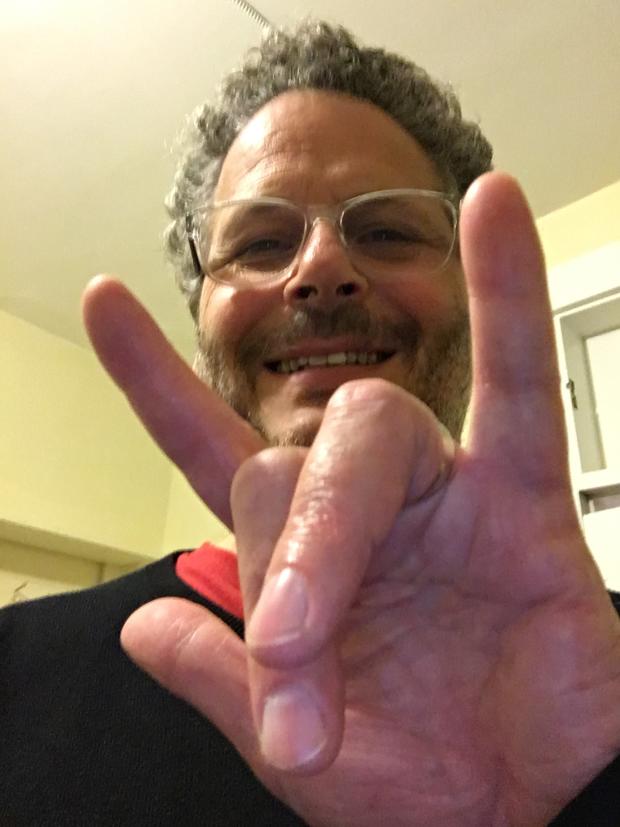 Can you tell us more about your connection to people with hearing and/or vision loss?

Well, let’s start off with a clarification of terms: I know that “people with hearing loss” is to some minds the politically correct, person-centered way of referring to Deaf people, but the thing is, Deaf people just want to be called “Deaf.” They don’t want to be called “hearing impaired” or “people with hearing loss” because that’s not who or what they are. DEAF is a noun, in American Sign Language, a proper noun. Like Swede. Or Spaniard. We wouldn’t call a Swede or a Spaniard English-impaired, would we? No, of course not. And it’s just as absurd (and offensive) to refer to a Deaf person as “a person with hearing loss,” defining him by what he lacks. Capital D Deaf people in America speak a different language (ASL) and have a different culture (Deaf culture). They are a linguistic and cultural minority and their affiliation with, and allegiance to, the Deaf community has very little or nothing to do with how much or how little they hear. The same is true for DeafBlind people, many of whom identify as “DeafBlind” regardless of how much residual vision and/or hearing they happen to have. Some DeafBlind people argue that Tactile ASL (T-ASL) is a different and distinct languager from ASL, and that DeafBlind culture is also a separate and distinct culture from Deaf culture. Suffice it to say, both the Deaf community and the DeafBlind community are like a country within a country, and hanging out with Deaf and DeafBlind people is like total immersion, or like study abroad. And as often happens, when you fall in love with a language you sometimes fall in love with the people who call that language home. My wife is Deaf. My daughter is Deaf. I have Deaf in-laws, and many of my friends, colleagues, and students are Deaf or DeafBlind.

How and why did you become an interpreter and Braille instructor?

It’s a long story but the short version is: I fell in love. And I kept on falling in love. First I fell in love with Braille. Before I took that introductory ASL class all those years ago, I met a blind man, a Braille-reader, who lived in my apartment building. He had diabetic retinopathy and was learning Braille, and orientation and mobility, and ADL skills at the Carroll Center for the Blind in Newton. We became friends, and he taught me how to walk with him as a sighted guide, and how to be with him--how to be comfortable with him--and when I saw the Braille books in his apartment I was intrigued. I remember looking at the Braille and thinking it looked like a blank page full of white goosebumps--how on earth can anyone read this stuff? I ended up taking a correspondence course in Braille transcription through the Mass. Association for the Blind, first learning to read it visually and to write it with a slate and stylus, then eventually graduating to a Perkins brailler. This led to a job as a Braille transcriber at the National Braille Press in Boston, across the street from Northeastern, where I later took that first ASL class. I ended up leaving the Braille Press to pursue ASL and interpreting, but I never lost touch with the Braille. In fact, I eventually learned to read it tactilely, which I still very much enjoy doing--I love the physicality of reading with my fingers. I wouldn’t say I’m “more in touch with the words” as a Braille reader--that’s probably just a romantic notion--but I AM a more versatile reader: I can read with the lights out; I can read with the book closed, my hand inside it, reading; I can read in the dentist’s chair while he’s drilling away; I can even read Braille while driving--left hand on the wheel, right hand on the dots, eyes on the road, eyes on the road.

What has your career taught you about working with individuals of various abilities?

Well, it’s hard to sum up in a few words, but for one thing, it’s taught me that ability is relative. When I’m in a room full of Deaf people with shared experience and backgrounds, and they’re all signing a mile a minute, the hands flashing and the nuances and name-signs and jokes and banter flying, I am often the one at a disadvantage--the one with the disability--because I’m missing a lot and I’m not understanding things that are right in front of my eyes. Deaf people often say that we hearing people are “blind,” that we don’t see the things that they see, things that are right in front of us. I’ve also learned that speech does not equal language, and that a lack of fluency in English does not equal a lack of intelligence. I’ve learned that intent does not equal impact; that though I usually intend well I sometimes inadvertently offend, oppress, collude, or otherwise step on toes. Audism is defined by Merriam-Webster as “discrimation or prejudice against people who are deaf or hard of hearing.” But it’s more than that. It’s the belief that it is inherently better to be hearing than to be Deaf. Most Deaf people do not entertain this belief. Yet most hearing people do, even many hearing people who work with, teach, interpret for, love, and live with Deaf people. It is a very subtle and insidious bias, and it’s something about which I’ve learned to be constantly vigilant.

Can you tell us about your book Deaf & Blind? What was your inspiration behind writing it?

It was published in October of 2020 by Main Street Rag. It brings together many of the poems, stories and essays that I’ve written over the years about my fascination with ASL and Braille and Deaf and DeafBlind people.  Much of the writing takes the point of view of someone on the outside looking in. That’s because, in spite of everything, I remain an outsider in the Deaf and DeafBlind communities. An ally, yes, an honored guest, perhaps, but ultimately, inexorably, an outsider. Therefore my perspective is necessarily an outsider’s perspective:  a sort of initiated audience member, hands clasped in admiration, empathy, praise. Here’s an excerpt from the preface to the book:

“...I was going to call this book Cathedrals, but in the end there were too many good reasons not to. First of all, there is obviously the religious connotation of that word, and religion and all its practitioners have historically done quite a number on Deaf people. It’s true that the pioneers of Deaf education were almost all clerics, that the first schools for the Deaf were organized by clergy or friends of the clergy, and that the desire to “save the souls” of Deaf people was often what led these religionists to devote their lives to working with them. But there was (and still is) a great deal of paternalism, self-righteousness, condescension, abuse, audism, ignorance and oppression on a vast scale. Ask any Deaf graduate of the Boston School for the Deaf. Ask him about the nuns, about getting his hands whacked with a ruler every time they caught him signing. Ask the Deaf Jew who wasn’t bar-mitzvahed because the rabbi insisted he be able to read from the Torah orally, because the word of God must be spoken. Ask the Massachusetts Eye and Ear Infirmary why they emblazoned the biblical quote “And the deaf shall hear... and the blind shall see” on a floor-to-ceiling mural in the corridor of their Longwood facility. Then ask the anonymous graffiti artist who tagged that mural, who responded to it by scrawling on it diagonally in a thick black marker: DEAF POWER!!!

‘Here’s the church and here’s the steeple.’ That child’s rhyme, which hearing children recite and illustrate with their fingers (‘Open the door and see all the people’) is, in a way, all this book is really saying: See all the people; all the people who talk with their hands. All the people who read with their hands. Signing is the most beautiful singing the world has ever seen. And it still gives me goosebumps to watch a blind person gracefully reading Braille with her fingertips as quickly as the sighted read with their eyes. ASL and Braille blow me away. They have always blown me away. The figurative cathedral, to me, is the communication: as complex, as elegant, as beautiful as any literal cathedral. It’s also the relationships. “God’s temple is a relationship,” says A Course in Miracles. It’s any relationship. It’s every relationship. And communication is communion.

Communication is sacrament. “Fine, but can we keep God out of it, please?” says the anonymous Deaf Power graffiti artist behind my eyes. OK then. How about this: Communication is the most important gift, the most important birthright, that we have in this world. And that’s something that I learned from Deaf and DeafBlind people. Because they are the ones who never take it for granted. They are the ones who most prize it, revel in it, share it, give it away freely and drink it up. Every drop is a cathedral. Exquisite, nourishing, towering in its beauty, accessibility, light.”