This page, REGAINING INDEPENDENCE WITH A GUIDE DOG: THE PETER AKUSIS STORY, is offered by
News

Peter Akusis, 55 of Wareham, has accessed services from Massachusetts Commission for the Blind (MCB) since childhood due to his blindness and visual impairment. In school, he learned Braille and received devices and educational support via MCB’s Assistive Technology program. However, his eyesight recently got worse, and Peter said that he began to stay inside of his house more because he was afraid to go out. Through it all, Peter’s counselors from MCB, including Social Rehabilitation (SR) Counselor Robyn Soares, checked in with him via phone and in person to ensure that he knew of additional services offered to meet his needs through MCB.

“I was finally not so stubborn to accept help,” said Peter. “Robyn gave me the encouragement I needed and helped me to know that I was not going through this alone.” 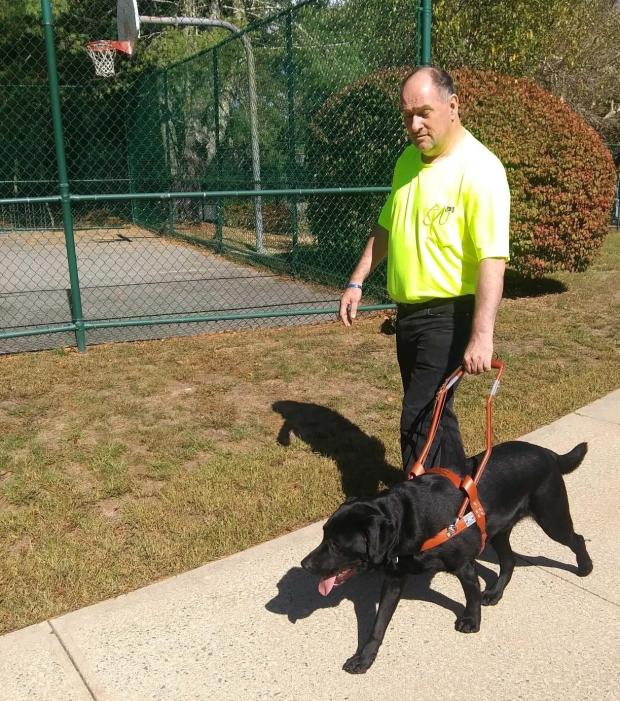 “I honor Peter’s self-determination and was there to provide services that supported his goals,” explained Robyn.

Last year, Robyn and Peter began discussing the possibility of a service dog to assist Peter with Orientation & Mobility (O & M) so that he could begin to feel more comfortable outside of the home. Robyn knew that Peter was a dog lover and hoped he would benefit from the canine support. Peter read through the materials that Robyn provided, and he filled out three applications for different guide dog organizations. Robyn explained that the possibility might not come to fruition, but the pair were hopeful for a positive outcome. Unfortunately, Peter’s first call from one of the organizations was a disappointment.

“The first place rejected my application,” explained Peter. “I immediately felt let down and almost gave up, but I received lots of positive nudging from Robyn who kept me going.”

Finally, on October 2nd, Peter got a call that he wasn’t expecting.

“The people from Freedom Guide Dogs for the Blind called, and they said that I had a dog waiting for me and that I was accepted,” said Peter who couldn’t believe the news and pinched his wife so that he would know he wasn’t dreaming. “When the guy showed up in my driveway with my dog, I still didn’t think it was true until he got out of the van and handed me the leash.”

That was the day that Peter met his big black Labrador and first guide dog named Ryker, also known as Morgan when off duty. The duo have been working together for two months, and Peter still can’t believe his luck.

“I consider it a blessing…I used to go shopping and hit my elbows everywhere using a cane but with Ryker, I’m all over the place,” said Peter. “It’s amazing how much freedom and independence I have, and I really feel that a cane has nothing on this set of eyes.”

While guide dogs aren’t a fit for everyone, Robyn acknowledges that Ryker was the perfect fit for Peter at this time. She is hopeful that Peter continues to make progress in regaining his sense of independence in the community.

“A guide dog really opened up the world for Peter, but he is the one who made it work,” said Robyn.

Peter said that Ryker has made lots of friends in the neighborhood, and they continue to adjust to living with one another each day.

“He helps me with the stairs in my house, and he has learned to move in a dark room since he’s a big black dog and I’ve tripped over him a few times,” laughed Peter. “Once I put on his harness, I literally have almost no fears, and I put 95 percent of my trust in him.”

Freedom Guide Dogs for the Blind will continue to stay in touch with Peter throughout the duration of his time with Ryker, and they recently sent Peter photos of Ryker as a puppy, along with putting him in touch with the individual who raised Ryker. 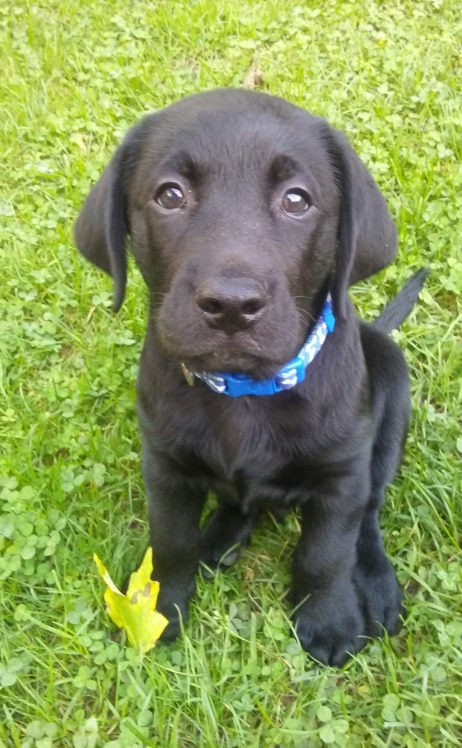 “I really didn’t realize what was available before,” said Peter. “I know it sounds funny, but MCB has opened my eyes.”

Congratulations to Peter and Robyn on building a professional relationship where possibilities are considered and explored to ensure that individuals who are blind and visually impaired can continue to access the world in new ways!