This page, Soaring towards success: 2021 peregrine falcon conservation in Massachusetts, is offered by
News

Peregrine falcon restoration began in the late 1970s and MassWildlife continues to monitor nesting success of this resilient and fascinating species in Massachusetts.

This year, 2021 marks the 35th year that wild peregrine falcons have successfully nested here in Massachusetts since their reintroduction. Known for their dive speeds of over 240 miles per hour, these charismatic raptors fell victim to the effects of DDT and related pesticides in the late 1940s. Accumulation of DDT caused falcons and other birds to lay thin-shelled eggs that broke under the weight of incubation. By 1955, there was only one nesting pair remaining in Massachusetts and by 1966, falcons had completely disappeared from the eastern US. Restoration efforts began in 1972, coinciding with the ban of DDT. After a few unsuccessful releases of young falcons in the late 1970s, young falcons released in downtown Boston resulted in the first modern Massachusetts nest in 1987. MassWildlife biologists now estimate there are nearly 50 territorial pairs in the state. At least 920 wild-hatched chicks have fledged (flown) from nests in the state since restoration efforts began.

Peregrine falcons nest on a wide range of modern structures including buildings, bridges, quarries, and cell towers. Each year MassWildlife visits nest sites and bands chicks in late spring and early summer. Leg banding provides biologists with useful information about the birds’ movements, lifespan, and injury recovery. In 2021, 55 chicks (31 female, 24 male) were banded at 19 sites across the Commonwealth. MassWildlife, along with partnering agencies, organizations, and individuals assist in restoration efforts by monitoring nests and chicks. The success of this effort would not be possible without a diverse community of partners from property managers to birders and the general public. Reports from the public help biologists identify new nest sites, track banded individual birds moving across the landscape, and  verify nesting success. Donations to MassWildlife's Natural Heritage and Endangered Species Program also help support this important work. MassWildlife is truly fortunate to partner with an engaged and informed public.

To get involved and learn more about peregrine falcons, please visit the links below: 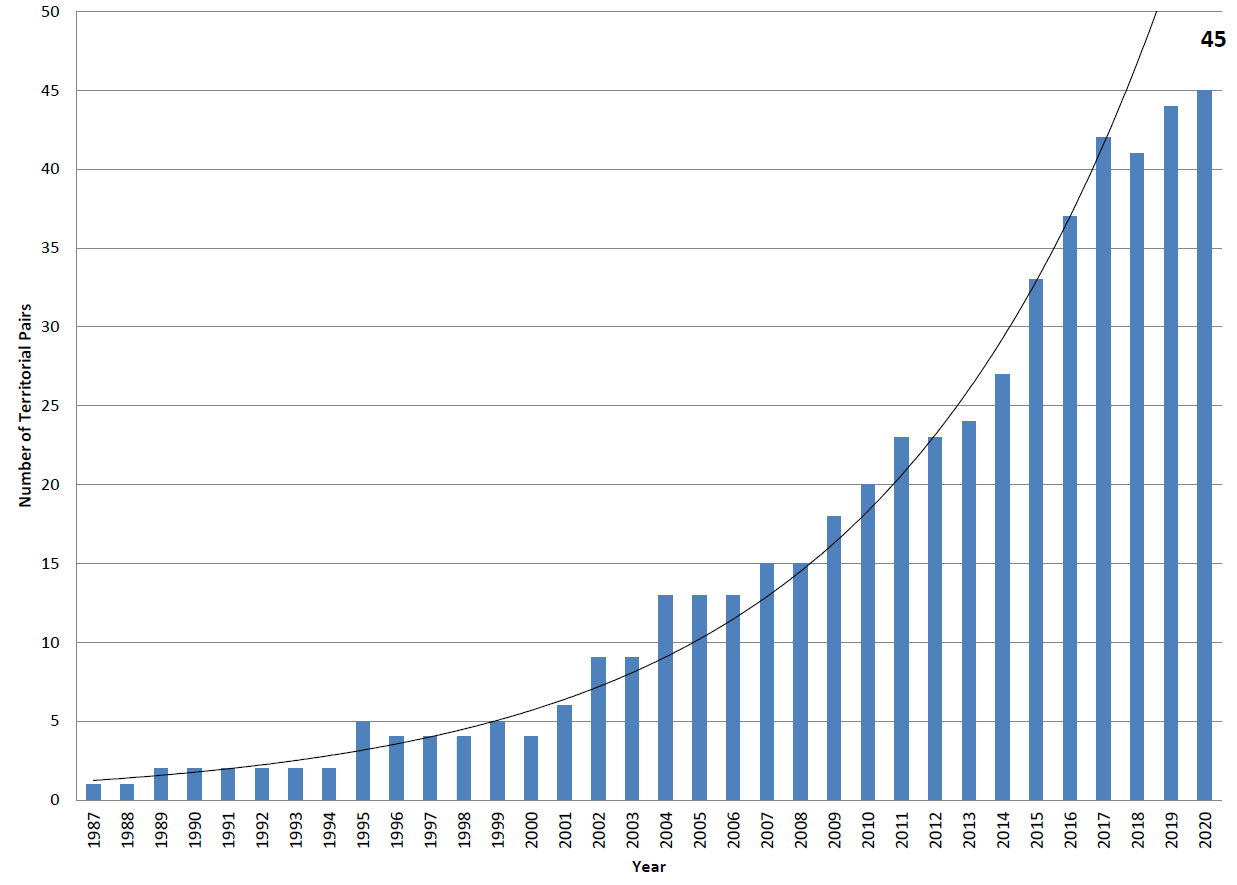 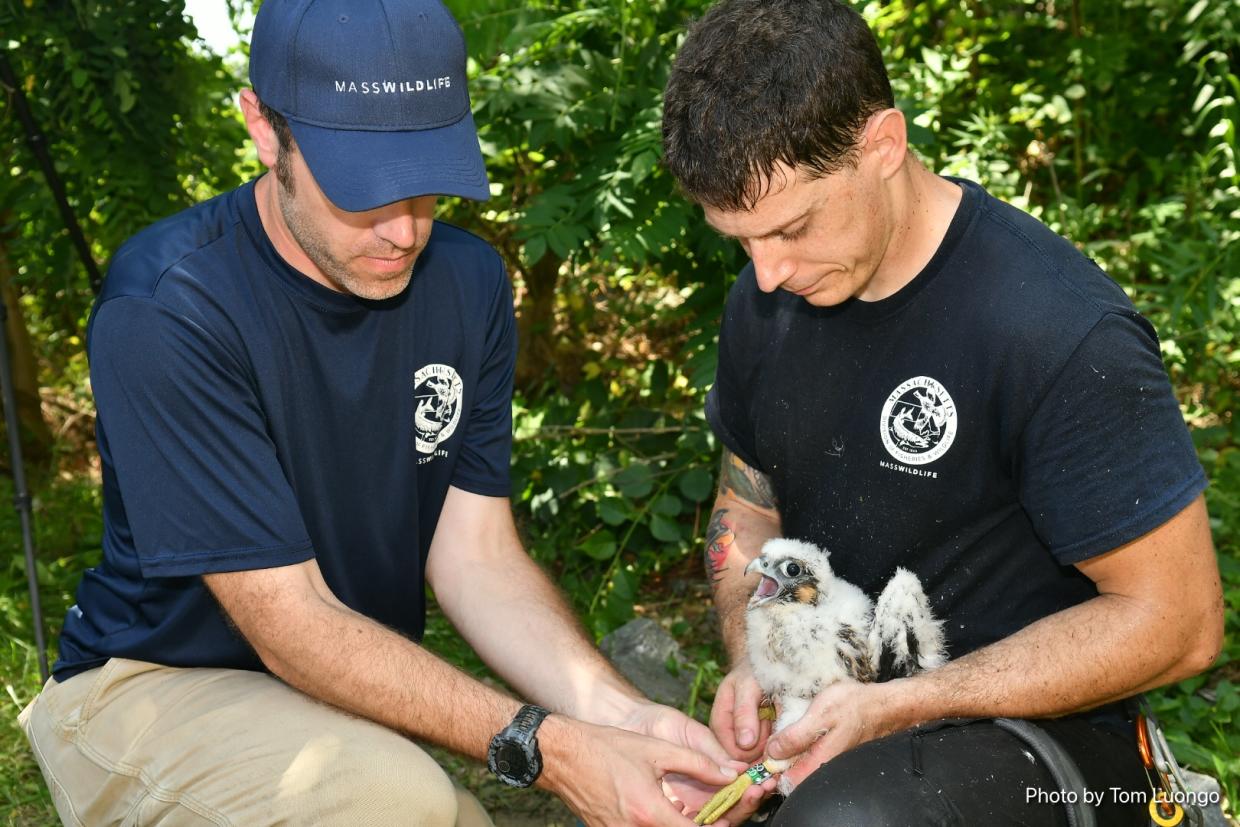 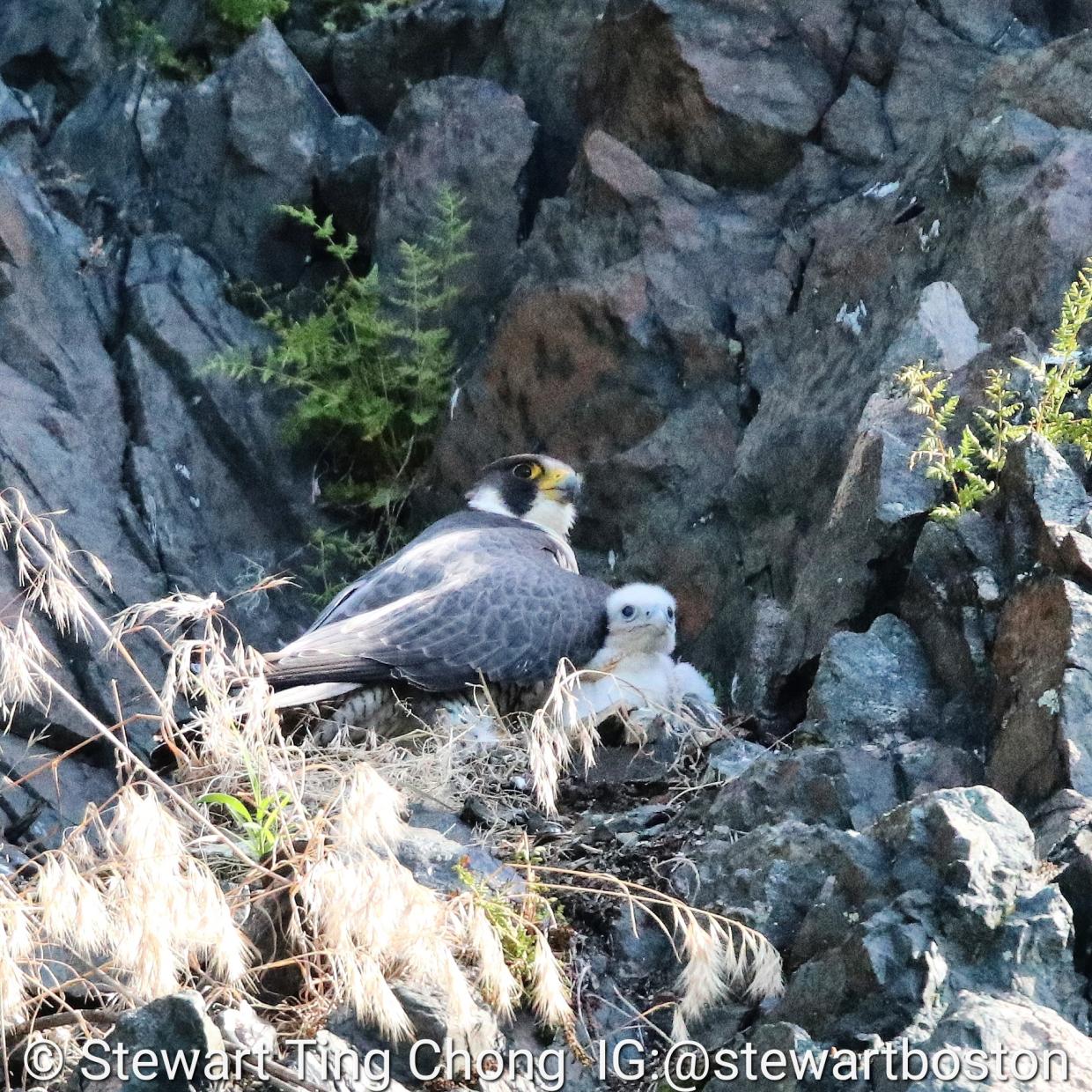 An adult peregrine and chick. Peregrine falcons are fierce protectors of their nest sites and their chicks. Photo by Ting Chong.

Related to Soaring towards success: 2021 peregrine falcon conservation in Massachusetts