Boston — A study issued today by the Office of State Auditor Suzanne M. Bump (OSA) showed Western Massachusetts communities have been left without the tools necessary to maintain or develop public infrastructure for roadways, buildings and broadband as a result of a declining population, geographic challenges, and a lack of overall resources. The study, Public Infrastructure in Western Massachusetts: A Critical Need for Regional Investment and Revitalization, notes that if not addressed, these public infrastructure challenges will further exacerbate the Commonwealth’s east-west divide. The study results have led the Auditor to call for a rural rescue plan that will increase funding for the Chapter 90 program, which provides state funding to municipalities for roadways, bridges, bikeways, sidewalks, and other transportation improvement projects, to $300 million annually; create a public infrastructure agency; and continue investment in expanding access to broadband internet.

“As billions of dollars flow from federal relief funding provided by the CARES Act and the American Rescue Plan, now is the time for the Commonwealth to develop a rural rescue plan to create a new future for these cash-strapped communities,” Auditor Bump said. “Addressing these public infrastructure challenges now, specifically for transportation, municipal buildings and broadband, will go a long way in terms of enhancing equitable planning and development for generations to come.”

“There are significant areas of investment that impact safety and basic economic development, among others, that small towns can’t fund on their own. It is not right that we allow a person’s zip code to determine the level of safety and opportunity they experience,” said Senator Adam G. Hinds who represents Berkshire, Hampshire, Franklin and Hampden counties and is co-chair of the Legislature’s Rural Caucus. “This public infrastructure study from the Auditor’s Office shows yet another area where the state needs to take an approach that incorporates the unique challenges by region, starting with their ability to pay for basic needs.”

“This study from the Auditor’s Office draws attention to significant and time-sensitive challenges for many small towns in western Massachusetts. Due to the lack of resources, communities here have to choose which public infrastructure problem to address based on available funding, or lack thereof,” said Sarah Reynolds, Town Administrator for the Town of Charlemont. “The recommendations and next steps laid out in today’s study would give municipalities a better means to help get much needed infrastructure projects done without being financially underwater which, in turn, would improve future viability.”

Through a survey of municipal officials in the four western most counties – Berkshire, Franklin, Hampden, and Hampshire – the study affirms the region has suffered from an overall state government policy focus on the Commonwealth’s more urban areas.

The maintenance of roads, bridges and culverts is a significant issue facing Western Massachusetts as many of these structures are in a state of disrepair. General funding from the state for these repairs comes from the annual Chapter 90 appropriation, but today’s study exhibits how the formula heavily favors more populated areas, most of which are in eastern Mass. This disparity has led to crumbling roadways, making development a challenge in the Western Massachusetts region. 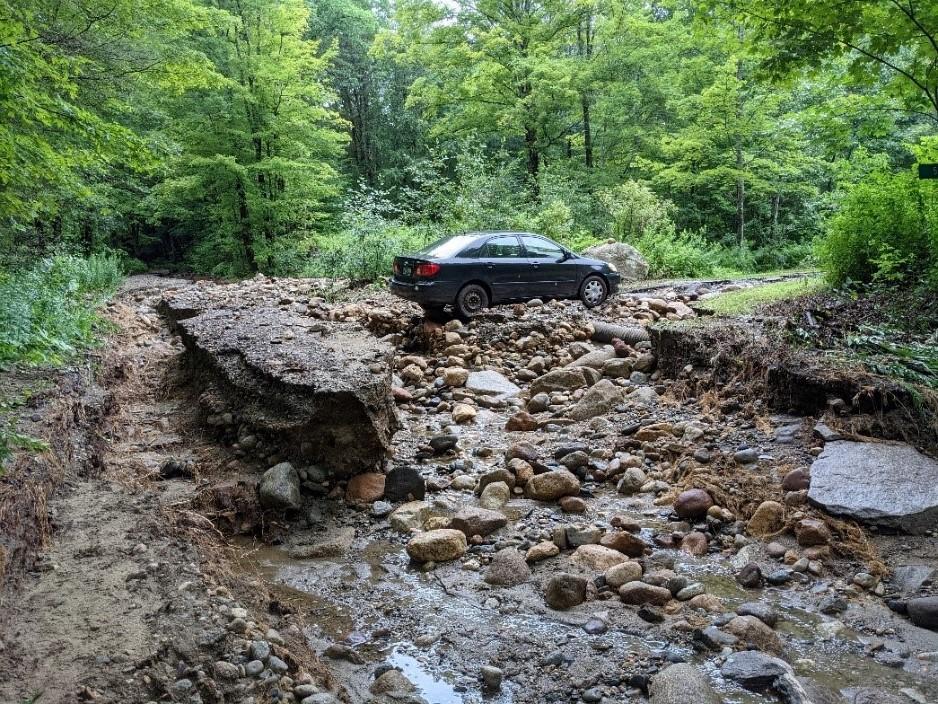 Damage to Chestnut Hill Road in Warwick (Franklin County) as a result of a storm in July 2021.
(Photo courtesy of Brian Snell, member of the Warwick Selectboard)

The study calls for an increase in Chapter 90 funding from $200 million to $300 million annually, as well as an update to the formula to put more emphasis on road mileage, rather than population, which would provide additional funding to towns in Western Massachusetts. Additionally, the state’s Small Town Road Assistance Program (STRAP), which is a part of the MassWorks Infrastructure Program at MassDOT, must be restructured to support the majority of the state’s smaller towns. In FY20, communities in Western Massachusetts accounted for 65 percent of the STRAP applications, but only five projects ended up receiving awards.

For years, many Western Massachusetts communities have had to deal with inadequate and dilapidated municipal buildings due to lack of funding and resources. Based on the study’s estimations, it could cost as much as $40,689,359 annually to maintain or renovate public safety facilities alone, and approximately $30,300,133 in annual expenditures for repair and renovation of public works facilities throughout all of Western Massachusetts.

Additionally, the study asserts that many smaller towns do not have the staff to draw up the proposals and submit applications for funding from competitive grant programs. Today’s study highlights that this lack of resources severely restricts municipalities in Western Massachusetts to invest and develop public infrastructure. To lessen this burden, the study recommends the legislature establish an agency with a dedicated source of revenue that is devoted to the creation and reparation of public infrastructure in underserved areas, modeled after the Massachusetts School Building Authority. This agency would also have a department that provides planners and engineers to local communities to assist in the design of projects and application for funding for critical infrastructure needs.

Deteriorating conditions depicted from the upper floors (left) and attic space (right) of the Deerfield Regional Senior Center. Photos courtesy of the Town of Deerfield.

Lack of reliable access to broadband internet and generally slower internet speeds has severely disadvantaged communities, businesses and residents throughout Western Massachusetts. The Commonwealth’s average advertised internet download speed is 191.2mbps, but among Western Massachusetts communities, the speeds are significantly slower. In Franklin County the average speed is only 109.7, which is just over half the statewide average. Although the state’s initiative through the Massachusetts Broadband Institute has made progress, today’s study shows there is still a long way to go in ensuring all communities have equal access to reliable internet. The study calls on the state to continue its collaborative work with networks to bring broadband to the areas that don’t already have access and to lower costs for customers. 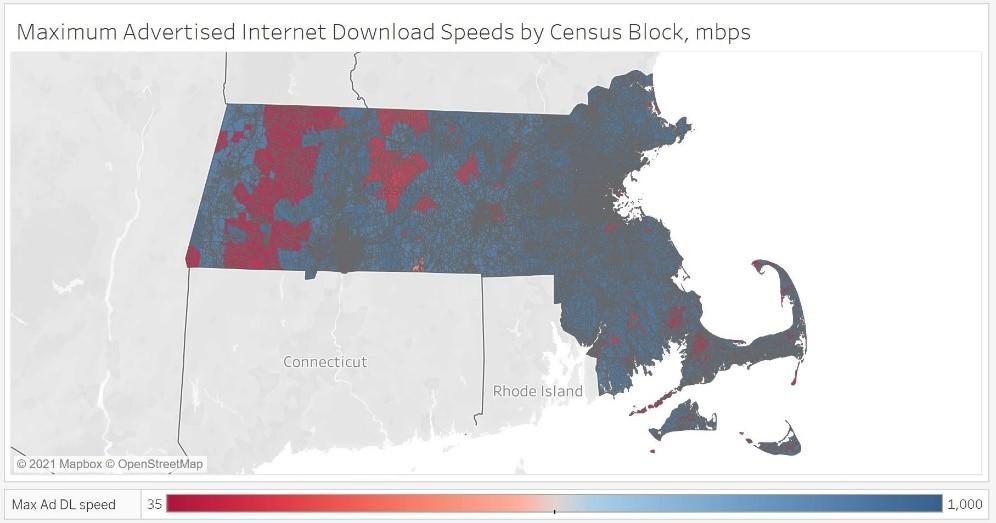 Today’s report is one of several that has been conducted by OSA in recent years focusing on critical infrastructure needs in the Commonwealth. In 2017, OSA released a study on water infrastructure, documenting the high need for investment in water and sewer systems, and the gap between the spending of municipalities and their obligations. Prior to that, a study released in 2011 showcased the deteriorating condition of dams across the Commonwealth, dozens of which were deemed to have the potential to cause loss of human life or significant infrastructure damage in the event of dam failure.

The Office of the State Auditor’s Division of Local Mandates (DLM) produced the study. In addition to responding to requests from local governments about potential unfunded mandates, DLM also produces Municipal Impact Studies, such as this one, that provide deep analysis of aspects of state law that have significant fiscal impacts on municipalities.

The full study is available here.

DLM responds to requests from local government leaders to determine if a state law is an unfunded mandate on municipalities. In addition, we serve as a source of information on issues harming municipal budgets, and provide recommendations to address those issues.
More

Public Infrastructure in Western Massachusetts: A Critical Need for Regional Investment and Revitalization