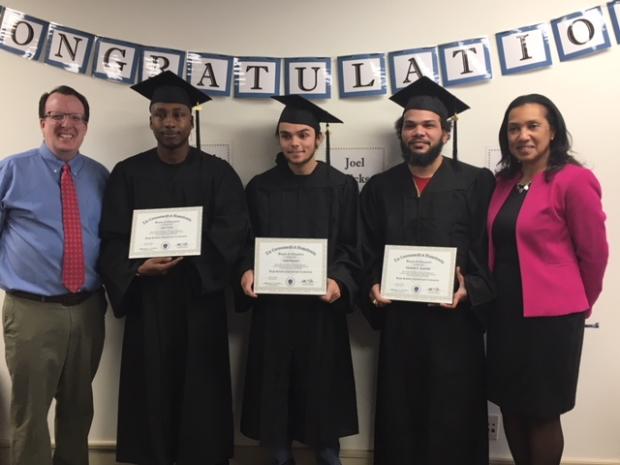 A graduation was held this week at the Taunton Community Corrections Center (CCC) for three center participants who earned their high school equivalency certificates. Dressed in black caps and gowns, Joel Hicks, Joseph Menard, and Eduardo Acevedo were presented with a certificate from the Massachusetts Board of Elementary and Secondary Education.

"Today is an example of the change we can make through the programming offered at the CCC. These three young men worked very hard on English, math, and social studies, but their achievement is also about proven techniques that teach good decision making and enhance motivation. They did the work because it made them feel good to achieve. One even returned after his time at the CCC ended in order to attain his goal of getting a high school certificate. They see that their future can be different than their past. I'm hopeful that they might see a future at Massasoit Community College or some other post-secondary education that will lead to a fulfilling career. That is how our work made the community a little stronger today," said Director of the Office of Community Corrections Vincent Lorenti.

Approximately 130 people have earned their high school equivalency certificates over the past year by participating in a program at one of the statewide centers, according to Vincent Lorenti, Director of the Office of Community Corrections.

The Taunton center is one of 18 centers across the state which provide a community-based alternative to incarceration. Participants are offered pathways at each phase of a criminal case, including pretrial services and pretrial treatment instead of jail. This includes intensive supervision with treatment for those returning to the community. The center provides counseling, education, and employment support, transportation, and drug and alcohol screening. The Fatherhood and Intimate Partner Abuse Education programs are also among the centers’ offerings.

The Office of Community Corrections (OCC) is the intermediate sanction department of the Massachusetts Probation Service. The mission of the OCC is the establishment of intermediate sanctions which offer a continuum of sanctions and services for probation, parole, sheriffs and the Department of Correction. This interagency and community collaboration supports public safety.
More