Want to catch more trout? Learn how to identify and catch the different types of trout that MassWildlife stocks.

The Division of Fisheries and Wildlife (MassWildlife) has been operating fish hatcheries since the agency was formed in 1866, making it the oldest state-operated hatchery program in the country. Today, MassWildlife manages five hatcheries in Belchertown, Montague, Sunderland, Sandwich, and Palmer, producing brook, brown, rainbow, and tiger trout. Each spring and fall, MassWildlife stocks these trout in lakes, ponds, rivers, and streams throughout the state.

MassWildlife begins spring trout stocking in March, and will continue stocking through May. Anglers can find daily stocking reports by visiting mass.gov/trout Read on to learn how to identify the different types of trout and get tips for catching them.

Brown trout get their name from their golden-brown color. Also known as German brown trout and Loch Leven Trout, they are native to Europe and Asia and were introduced into Massachusetts in the late 1800s. They are 9–18 inches long when stocked.

Tiger trout get their name from their distinctive striped color pattern. They are a sterile hybrid produced from a male brook trout and a female brown trout. MassWildlife raises tiger trout at the Sandwich Hatchery and stocks approximately 2,500 tiger trout annually. Due to the small number released each year, they are a unique trophy sought by anglers throughout the state. Tiger trout are 14 inches or longer when stocked. 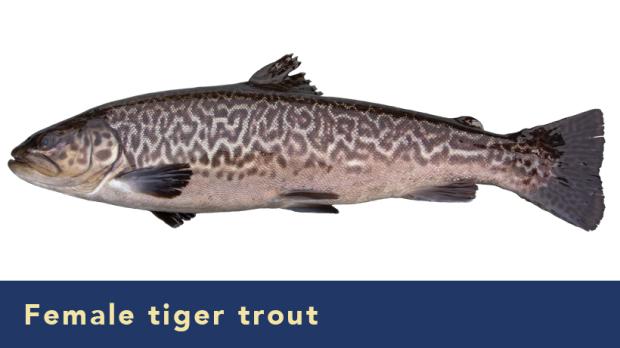 Remember, you can get daily stocking reports by visiting mass.gov/trout throughout the spring fishing season.

Related to Trout tips and tricks